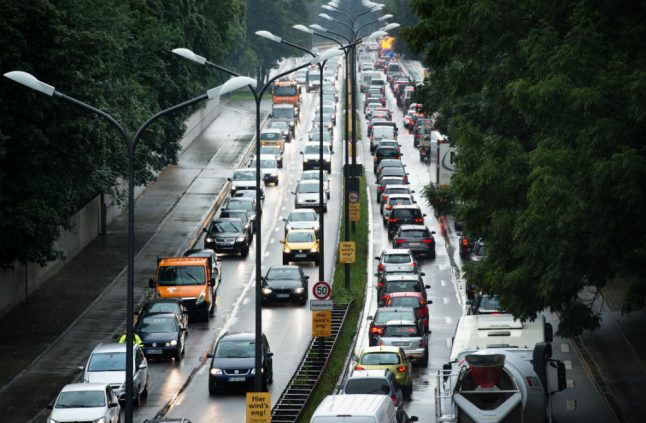 Commuters in a traffic jam in Munich. Photo: DPA

This marks an increase of 2.7 percent compared to the previous year, or an additional 85 deaths. At the same time, it was the third lowest figure since 1950, the office reported.

According to results from the first eleven months, the increase in the total number is due to a greater number of cycling and motorcycle deaths.

Between January and November, 50 cyclists died, an increase of 13.6 percent from the previous year. In addition, 57 motorcyclists were killed, an increase of nine percent, according to the Federal Office in Wiesbaden.

In contrast, the number of pedestrians fell by around six percent and motorists by around two percent. As a whole, deaths on German highways (the Autobahn) have been decreasing due to better seatbelt regulations, recommended speed limits and air bags. Graph created for The Local by Statista.

SEE ALSO: Are road accidents on the rise in Germany?

The total number of accidents recorded by the police fell slightly by 0.4 percent to 2.6 million. Property damage occurred in 2.3 million cases.

The largest increase in traffic fatalities was reported by the Federal Office for Saxony (plus 50) and Hesse (plus 26). According to the figures, the largest decreases were recorded in Baden-Württemberg (minus 18) and North Rhine-Westphalia (minus 16).

Measured by the number of inhabitants, the risk of dying in road traffic was highest in Saxony-Anhalt with 63 fatalities and in Brandenburg with 57 fatalities per 1 million inhabitants.