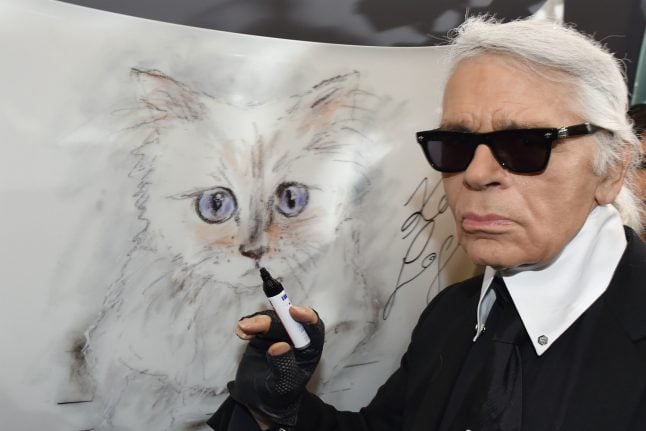 Karl Lagerfeld in Berlin in 2015 with a drawing of his cat Choupette. Photo: DPA

We looked at some of the most memorable quotes of the Hamburg-born fashion designer, artistic director at Chanel, who as died aged 85 in Paris.

“I am very much down to earth. Just not this earth.”

“Everybody should go to bed dressed like they have a date at the door.”

“I'm a kind of fashion nymphomaniac who never gets an orgasm.”

“I hate intellectual conversation with intellectuals because I only care about my opinion.” The designer in Berlin. Photo: DPA

“They are my burka… I'm a little shortsighted, and people, when they're shortsighted, they remove their glasses and then they look like cute little dogs who want to be adopted.”

“Vanity is the healthiest thing in life.”

“Anyone who is not at least trilingual is a hick.”

“I shouldn't say this, but physically he was quite repulsive.”

On short men
“I have a terrible loathing of ugly short men… women can be short but for men it is impossible. It is something that they will never forgive in life… they are mean and they want to kill you.”

On Chanel
“What I do Coco would have hated. The label has an image and it's up to me to update it. I do what she never did. I had to go from what Chanel was to what it should be, could be, what it had been to something else.”

On his secret
“I am a sort of vampire, taking the blood of other people.”

“Having adult children makes you look 100 years old. I don't want that.”

“The only love I really believe in is a mother's love for her children.”

On the oldest profession

On the aesthetically challenged

“I hate ugly people. They are very depressing.”

“If I was a Russian woman I would be lesbian. Russian men are not good looking.”

“Why should I stop working? If I do I'll die and it'll all be finished.” Lagerfeld at a show in Paris. Photo: DPA

“When I asked my mother what homosexuality was, she said it was the colour of your hair, and she was right. It is nothing.”

“When I was 14, I wanted to smoke because I wanted to look grown-up. But my mother said: 'You shouldn't smoke. Your hands are not that beautiful and that shows when you smoke.'”

“My mother used to say, 'You shouldn't wear hats. You look like an old dyke.' Do you say such things to children? She was quite funny, no?”

“Whoever wears running pants has lost control over his life.”

On being a legend

“A sense of humour and a little lack of respect: that's what you need to make a legend survive.”

“We cannot talk about suffering. People buy dresses to be happy, not to hear about somebody who suffered over a piece of taffeta.”

“I send notes. I'm not a chambermaid whom you can ring at every moment. Today, you know, most people act like they work at a switchboard in a hotel.”

“I have a sort of Alzheimer's for my own work, which I think is a very good thing. Today too many people remember what they did — just forget it all and start again.”