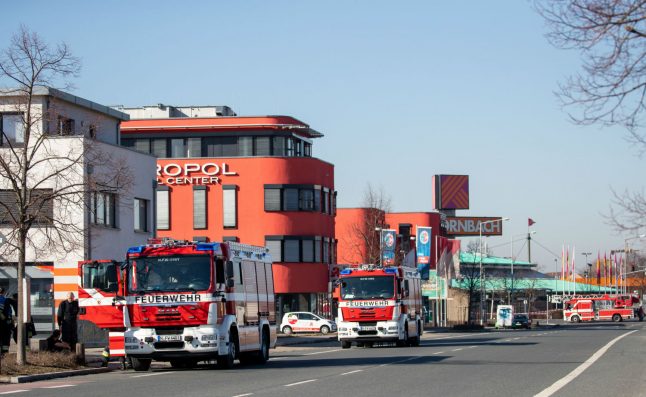 Fire brigade vehicles next to an area where a bomb from the Second World War was discovered in Nuremberg. Photo: DPA

The cities of Nuremberg and Fürth declared a emergency in order to prepare for the deactivation, which took place around 11:30 p.m. on Monday evening.

A total of 8,000 people had to evacuate a 100 metre radius surrounding the bomb, 5,000 of them residents, reported the city of Nuremberg. A clinic in the vicinity of the site was also evacuated, and an inner-city motorway was completely closed from 7:30 p.m.

SEE ALSO: What you need to know about World War II bomb disposals in Germany

Shortly before midnight, just after the deactivation of the ordinance – which contained a still-active chemical fuse – the disaster alarm was lifted and the evacuation area released so that the residents could return to their homes.

Originally, emergency forces had hoped to remove the chemical fuse from the bomb on site – in an area on the border of Nuremberg and Fürth – with the help of a special device, but this failed.

Authorities took caution to deactivate the bomb, which fell in 1945, and to keep the impact felt on the ground minimal.

They worried that the glass windows of the “Pyramid”, a large hotel building, could burst upon the detonation. But the operation proved successful.

“First inspections did not reveal any damage to buildings in Nuremberg and Fürth, not even to the glass Pyramid,” the city council confirmed on Twitter. The bomb was detonated from a distance of several hundred meters.

The explosive device had been discovered in the morning during construction work in an industrial area in the Nuremberg district of Höfen, directly on the city border with Fürth.

The police cordoned off the site; in the course of the afternoon, the adjacent areas were completely cleared, including the residential area of Kalbsiedlung in Fürth and its gyms, schools and other public buildings.

A clinic with 70 patients was also completely evacuated. The patients, including those in the intensive care unit, were taken to other hospitals in the region.

Numerous roads, including the Südwesttangente, an important inner-city motorway, and the Rhine-Main-Danube Canal, were also completely closed.

The bomb is one of many that has been found lately in Germany during construction work, with other recent finds in Frankfurt, Cologne and Berlin.

Usually the deactivation doesn't have an impact, but a deactivation in Lingen, Lower Saxony at the end of January broke windows and caused heavy property damage in the city's old town.