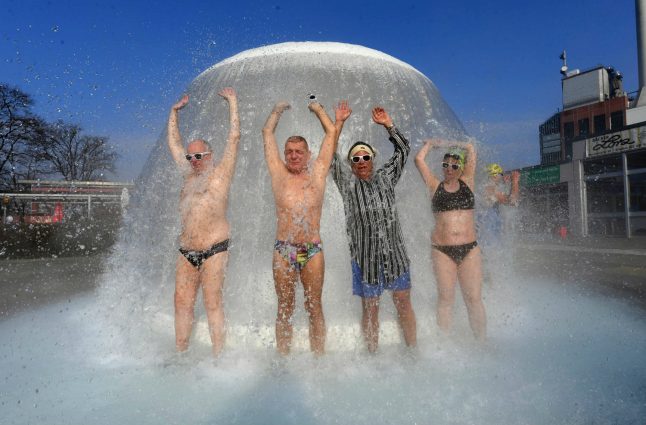 Swimmers at Karlsruhe Sonnenbad during the opening of the pool last year, on February 23rd. Photo: DPA

The outdoor Sonnenbad in the southern state of Baden-Württemberg will start the new swimming season this Friday (February 22nd), inviting people to “jump into spring”.

SEE ALSO: Temperatures up to 17C forecast in Germany this weekend

Mayor Martin Lenz and head of the town's bathing facilities Oliver Sternagel will ring in the new outdoor swimming pool season at 10 am.

They are inviting all bathers to come down and enjoy the first open-air swim of the season in the 28C heated swimming pool. Bathing bosses said it was “the perfect place to celebrate the transition from winter to spring”.

The pool has become a cult favourite because it's always the earliest outdoor spot to open after the winter break, and it remains open until the first advent in the run up to Christmas.

“Year after year, this unique concept inspires outdoor pool fans of all ages,” a spokesperson of the pool said.

The news came as the warm spell continued. On Sunday, the German Weather Service (DWD) reported that the mercury climbed above 20C in some parts of the country Sunday.

As we reported, it's due to an influx of sub-tropical air, which is warming up much up the country, and other parts of Europe. A cyclist in Hanover, Lower Saxony, on Sunday. Photo: DPA

In Geilenkirchen near Aachen, North Rhine-Westphalia, 20.6C was measured on Sunday, a meteorologist from DWD said late on Sunday, the Mercur reported. In Emmendingen, Baden-Württemberg, people could also confidently ditch their winter jackets, as it was 20.3C outside.

Temperatures above 20C in the middle of February are “extremely unusual”, the DWD weather expert said.

Mild temperatures usually only arrive in Germany four weeks later, around March 20th, according to experts.

It is not known yet if the temperatures have been record breaking. Extremely mild weather has been reported in Germany before – at the end of February 1900, 23.1C was measured in Jena in the eastern state of Thuringia.

Dr. Markus Übel of the DWD, said the weather would “spoil us again with lots of sunshine and spring-like temperatures between 11 and 15C” at the beginning of the week.

In some regions it could hit 17 or 18C on Monday but it's unlikely the mercury will go over the 20C mark.

Übel said in areas around the river Danube in the south it will be cooler, with temperatures possibly remaining in single digits.

As the week progresses Übel said the weather will become more “volatile”.

There could be lots of clouds and some showers but temperatures will remain fairly mild, around 8 to 12C. On the Upper Rhine the mercury could rise to 14C. It will be much cooler at night.

From next Friday to Sunday the weather will be dominated by high pressure again, reports Übel. “However, it will probably not be as sunny as it is now,” he said.

He said areas in the south have the greatest chance of lots of sun and the western half of the country is likely to be warmer than the east.