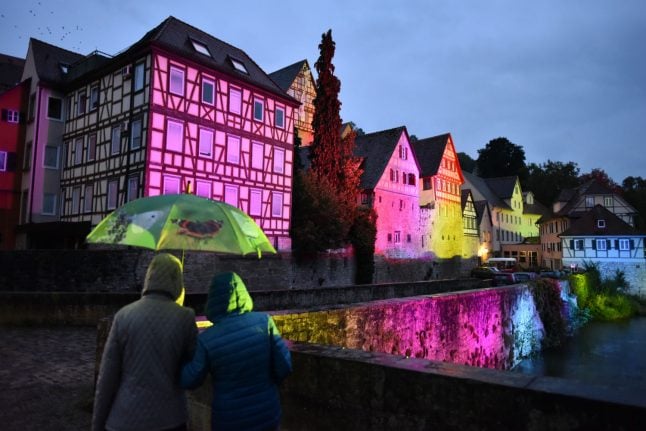 Visitors to Schwäbisch Hall, lit up for the night of open monuments in September 2017. Photo: DPA

Those seeking the picture-postcard fachwerk (half-timbered) vision of Germany usually have to pay a price for the privilege – weaving through hordes of fellow tourists and being overcharged for food and drink.

If one knows there to look, however, there are some places that are relatively unsullied, and offer much the same charm, beauty and atmosphere as, say, Rothenburg ob der Tauber.

Schwäbisch Hall, located in the north-east of Baden-Württemberg, has been a centre of trade and commerce for well over a thousand years, yet a unique history has meant that a considerable amount of its heritage has managed not to be demolished or rebuilt – much to the delight of visitors.

Our story begins in the city of Schwäbisch Hall – just ‘Hall’ in those days – a town not too far from Stuttgart. In the late 15th century it was a free city of the Holy Roman Empire, a trading town known for two things – salt and coining. It was an affluent place. /2 pic.twitter.com/S3qDhSfZiJ

At first it was salt, then a minting industry, that brought ‘Hall’ (as it’s known locally) its fortune. The money pouring in from salt pools and coining was enough to ensure its status as a Free Imperial City for centuries.

A wall surrounding the Stadt

A large wall was built surrounding the town, with a number of towers looming over the local countryside. Much of the wall and towers are gone, but there are some sections you can still explore.

Most visitors to the town notice two distinct landmarks straight away – sitting atop the town like some sort of fortress is the ‘Zeughaus’, or Arsenal. Built in the 16th century to deter and defend outside attacks, this five-storey construction is now used as a theatre and venue for local arts.

The other landmark dominating the town is the Michaelskirche. A Gothic giant, it soars atop a steep set of stairs about the town’s main square. Beyond the massive, painted statue of the Archangel Michael that greets you at the door, the interior is a treasure house of medieval and renaissance religious art. Locals and visitors sit outside in the Marktplatz for an annual outdoor church service for bikers. Photo: DPA

Among the many carved altars and ornate tombs, look for the tusk of a mammoth that was put on display. We can thank the reformer Johannes Brenz for the state of the church – even as others across the country were being stripped, he protected the treasures of his hometown church.

While you’re close to the Michaelskirche, grab a bite to eat, or something more substantial at the Cafe Am Markt. While the place may appear mostly devoted to sweet treats – not that there’s anything wrong with that – there’s a lunch menu packed with local Swabian specialities to keep you going.

The town centre itself is a mixture of baroque, half-timber and 19th century buildings, with some areas more pristine and uniform in their look than others. On a sunny day, yes, it’s a perfect place to capture some shots for Instagram. In the main square, look for the pillar that was used to chain up lawbreakers, and while wandering through the town, check out the sculptures erected celebrating the town’s heritage – I’m quite fond of the giant coins half-buried in the earth, personally.

Down by the river Kocher, some bits of the city’s old walls, and a couple of covered bridges crossing the river can be found. They’re another great place to snap some shots, especially when the sun is shining onto the river.

If it’s more culture you’re looking for, the two outposts of the Würth Collection are well worth your time. Established by local tool manufacturer Reinhold Würth in the 1980s, the main gallery houses a permanent collection of art from the 17th to 21th centuries, in addition to rotating exhibitions. Visitors to the Würth Collection in April 2018. Photo: DPA

A short distance away, a collection of 15 and 16th century masterpieces from Lucas Cranach and other German Old Masters, is housed in the medieval, gothic Johanniterkirche. This really is a sight to behold, and gives you some idea of the way Germans of the period viewed themselves and their faith.

If you’re planning on staying the night, may I recommend the Residenz am Weilertor – accommodation in one of the city’s remaining medieval towers, and only a few minutes walk from all the major sights. Additionally, it’s next to a really nice wine bar, Weinstube Weilertor, known for its selection of local wines and Swabian culinary mainstays.

As close as you can get to the medieval Germany of popular imagination, Schwäbisch Hall is most definitely one of our picks for a day-trip or longer.

Schwäbisch Hall is easily accessible via road and rail from Stuttgart, Nuremberg and Heilbronn – multiple rail and bus services depart daily from each. 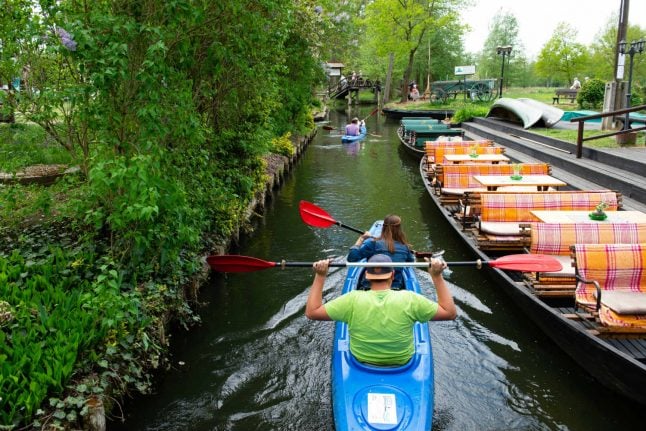 TRAVEL
Travel: Six reasons why the Spreewald near Berlin is worth visiting 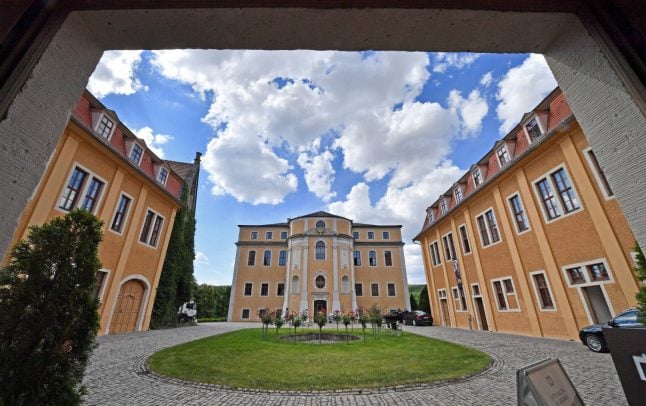 Around Germany, the colloquial verb herumgurken (pickle around) has the meaning of traveling around and around when lost.

While I was equipped with a map, the word still seemed the most fitting way to sum up my time in the Spreewald, known not only for its vast pickle production, but also stunning nature and culture to discover by bike, foot or – especially – canoe.

Here are six reasons it’s worth a visit, whether as a Tagesausflug (day-trip) from Berlin or a week-long adventure. The pickle harvest in Kasel-Golzig in the Spreewald on July 17th. Photo: DPA

Known for some 50 percent of the production across Germany, Spreewalders take pride in their pickles. In the three days I was there, it felt like I sampled every sort of gourmet Gurken delicacy there is, from creamy Gurkensuppe (served both chilled and warm in the summer), Gurkenaustrich (spread) and a surprisingly good Gurken and raspberry Radler.

Tucked into the forest, the town of Burg even offers Gurkeneis if you fancy the summer sweet with a green tint. People going for a Gondola ride in Lehde. Photo: DPA

You might mistake the text under German signs around the area for Polish or Czech. Yet it’s actually Sorbian, an official minority language of Germany spoken by over 60,000 people.

Many of them live in the Spreewald, and the little village of Lehne – a two kilometre walk or cycle from the old town in Lübbenau  – pays tribute to their way of life and language, including an open-air museum that gives a glimpse of how the Wends (as they are known locally) lived in the 19th century. Otters are often spotted swimming in the Spreewald. Photo: DPA

With its more than 5,000 species of animals, Spreewald is so rich in biodiversity that the 475 square metre area was given the title of an UNESCO Biosphere reserve in 1991.

One particularly striking species are the white storks, which are often spotted perched atop large nests they’ve created on large protected pillars. The species is critically endangered elsewhere in Germany.

The Spreewald can also at times feel like the tropics with colourful animals and amphibians like the fire-bellied toad and over 900 species of Schmetterlinge (butterflies).

Took a first mini-trip in corona times to the #Spreewald, a stunning region an hour from Berlin. Well worth it for anyone here who wants to travel, but not too far yet pic.twitter.com/LHK0P2j84j

It felt like we were much further from Berlin as we hiked past Hütte (cottages) with thatched roofs and cozy country stores with local products that closed at 2 pm each day. From Lübben, we hiked along a 14-kilometre riverside trail to Schlepzig, known for both its Bauermuseum (farm museum) and Brauerei with locally brewed beer. A true streaming service: a postal woman delivers mail by water at the start of the Post's canoe delivery season on May 14th. Photo: DPA

With 1,500 kilometers of waterways, one of the best ways to explore the Spreewald is by water. The area is so-well connected by water that even mailmen and women from the Deutsche Post pragmatically paddle from home to home to deliver post.

We had a sporty Sunday, leaving Lübben at 9:30 am and paddling 14 kilometres to Lübbenau, just in time to a devour a hearty lunch of potatoes and Quark cheese with linseed oil, a Spreewald specialty, at a beer garden affixed to the side of the river. We then headed back for another adventure, as small waves formed amid the windy afternoon weather.

Families of swans, cranes and ducks joined the journey at times, unfazed by their human companions.

If you're looking for a more leisurely journey, all sorts of canoes, kayaks and other boats can be rented by the hour, or you can sit back in a Venice-style Gondola as a host in tradition garb guides you through the landscapes. Bike riders in the Spreewald town of Leipe. Photo: DPA

Distinctly marked by yellow signs of a cycling pickle, the Gurkenradweg forms 260 kilometres of scenic trails that lead through the forest, starting in Lübben and leading to Cottbus, the heart of Brandenburg’s Sorbian-speaking community. Bridges break up the journey (and sometimes, this being Germany, construction projects as well.)

If you’re timid about trekking longer distances, most bike rental shops also offer daily e-bike rentals for around €25 a day. Just be advised, especially in the summer months, to reserve bikes at least a week in advance. 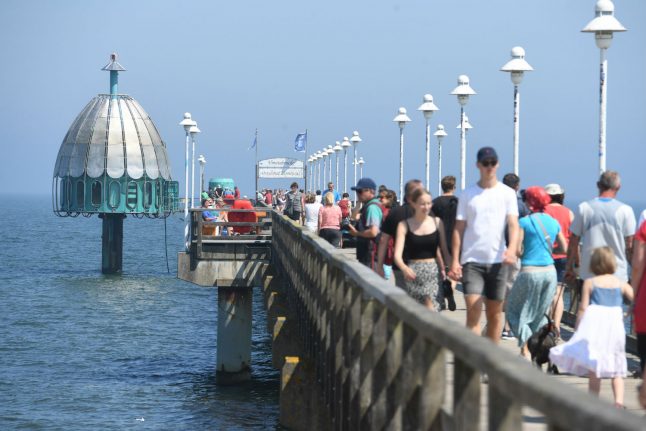 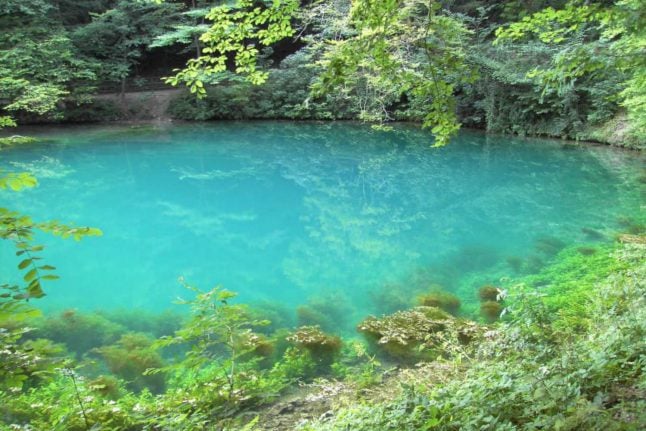 HISTORY
Weekend Wanderlust: Why the town of Blaubeuren has Germany’s bluest water
Url copied to clipboard!