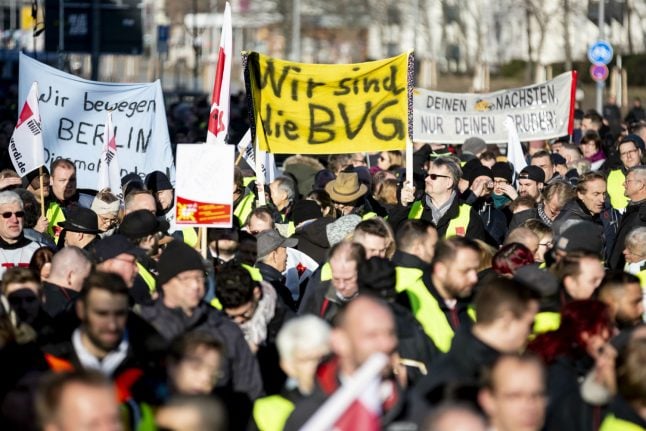 Thousands of BVG employees and union members demonstrated in Berlin on Friday during the so-called 'warning strike'. Photo: DPA

The strike by 'Berliner Verkehrsbetriebe' (BVG) employees officially ended at 12 noon. Travel information centres announced that buses, the U-Bahn underground system and trams would be up and running again, but that delays and irregular services were to expected.

The BVG said traffic on the tube, tram and bus routes was starting again but until all the lines were back to normal, disruption could be expected over the next hours.

On Friday morning, buses and trams remained in depots, while many U-Bahn gates stayed locked, as travellers were forced to find other means of transport to get to work or travel through the city.

Over the course of the morning there was also a huge demonstration by BVG employees and union members in the centre of Berlin.

SEE ALSO: Strikes shut down schools and offices in Berlin on Wednesday

The strike started at 3:30 am. It was being held over a dispute regarding pay and conditions, and was the workers' first strike since 2012 when they walked out on a Saturday for 15 hours.

“The strike is going according to plan”, a spokesman for the union Verdi said on Friday morning, reported DPA.

The union has also not ruled out the possibility of further strikes. An information sign in English alerting passengers about the strike. Photo: DPA

Many people with early morning flights faced huge disruption getting to the airport. Along with the U-Bahn services, the bus lines TXL, X9, 128 and 109 to Tegel airport were not due to be in operation until noon. Passengers travelling to and from Schönefeld were advised to switch to the S-Bahn or regional trains.

However, shortly after 9 am, Berlin airport services (BER) organized a shuttle bus to take passengers to Tegel from the Jungfernheide S and U-Bahn station.

We have organized a shuttle service with buses between TXL S+U Jungfernheide. Alternatively, please use the footpath. Travelers are asked to arrange more time for their journey to the airport.

The S-Bahn system, which is operated by Deutsche Bahn, was not affected directly by the strike. Many people switched to S-Bahn trains to get to their destination.

S-Bahn services and regional trains were over-crowded as people flocked to them during the strike. At Ostbahnhof on Friday there was overcrowding. Photo: DPA

The Berliner Zeitung reported that the S1 (Zehlendorf-Potsdamer Platz) and the S5 (Mahlsdorf-Warschauer Straße) was planning a total of around 50 additional journeys, which may have eased some of the congestion. The ring bahn at Ostbahnhof was packed. Photo: DPA

The U-Bahn stations which had their gates unlocked looked like ghost towns.

Due to a warning strike today #Berlin U stations look as #abandoned as #Südstern does in my photo series ? Full solidarity with #BVG people being on #strike ♥️
.#streik #warnstreik #verdi #weilwirdichlieben #visitberlin #germany #deutschland #iloveb… https://t.co/SPLwwM3wkG pic.twitter.com/SOsMDOa1IU

Those stations with the gates shut left many passengers perplexed. Many people got on their bikes to travel across the city in the morning. Luckily, the sun was out.

The strike also resulted in lots of people switching to their cars. This meant traffic was particularly heavy, especially during rush hour.

The red parts in this graphic by the Tagesspiegel show where the worst traffic jams were this morning.


Other people walked to work, with some leaving earlier than usual.

Some people commented on how quiet areas of the city were on Friday since they were usually filled with trams. This is Alexanderplatz.

A total of 28 subcontracted bus lines and all ferries were excluded from industrial action because subcontractors are not on strike.

– The BVG ferry lines were also in operation. There are six ferry lines at locations including Wannsee and Müggelsee.

Some BVG employees picketed at different locations throughout the city during the strike. Here, an employee wears a bib with the line: 'We are worth it' on it, early on Friday morning. Photo: DPA. Berlin and Brandenburg broadcaster RBB posted a video on Twitter of the huge number of employees protesting at the BVG headquarters.

Many people urged Berliners to show their solidarity with the strikers with the hashtag #Solidarität.

This tweet shows a picture of graffiti on an U-Bahn train. It says: 'Dear BVG employees, we wish you lots of success in the collective bargaining negotiations, higher wages and shorter working hours.'

What's the strike about?

The negotiations on the new collective agreement for the 14,500 employees are also about a fairer classification in the wage and salary table. The Christmas bonus of €1,400, which is only paid out after one year of being an employee, should also be paid earlier, according to the union.

The union has warned that more strikes could take place.

BVG bosses have described the strike as “completely inappropriate”.

It's the latest in a long line of strikes to hit Germany as negotiations over pay take place. There's been industrial action by airport staff and public service workers.