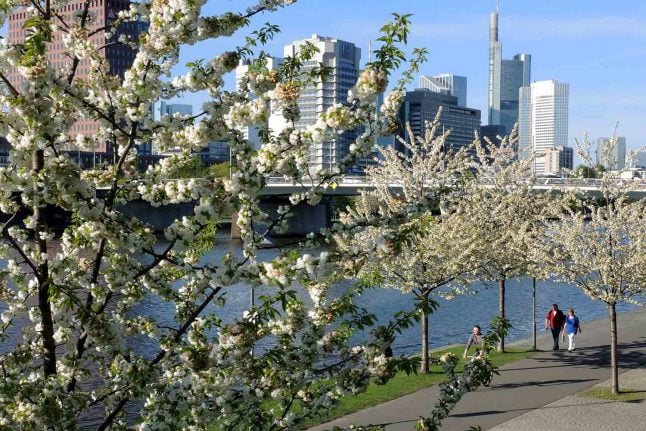 A couple walks along the Main river in Frankfurt. Photo: DPA

Despite predictions in November that many parts of Germany may be on track for a cold winter, it appears that the chilliest days may already be over.

Right in the middle of February, weather forecasters have predicted a steady rise in temperatures in the lead-up to the weekend.

Predictions are for a spring-like 11 to 12 degrees Celcius across much of the country in the lead up to the weekend, with some areas expecting highs of 15 degrees Celcius.

Germans can thank an influx of sub-tropical air for the phenomenon, which should warm most of the southwest, west and north of the country.

The German Weather Service (DWD) asked in a tweet if a 'spring awakening' was around the corner, following a Spiegel Online article stating that 'the spring comes early' this weekend.

While some of the warmer areas will remain covered in cloud, the sun is predicted to shine in Hesse and northern Bavaria, as well as for several areas across the Ruhr region. These regions are expected to have the highest variance, with evening temperatures forecast to drop as low as 0 degrees.

Although much of the country is expected to warm up over the coming days, for many Germans it might not be time to put that winter jacket in storage just yet.

The subtropical air will not reach much of the south of the country. Temperatures are expected to remain chilly, particularly at night where lows of 0 to -5 are forecast. Typical February weather will still be seen in the Black Forest and the Alps, where lows of -10 are expected.

The meteorological spring begins in two weeks on March 1st, while the March Equinox starts three weeks later on the March 20th.