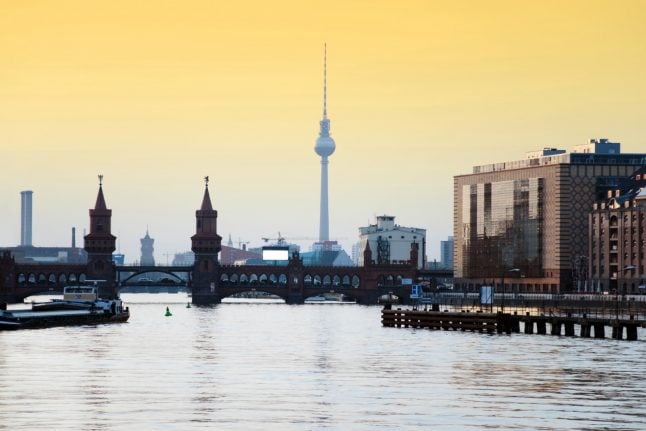 I can remember the exact moment I decided to move to Berlin. I was bobbing around in the Müggelsee, a lake in the former east, plants getting caught in my feet. I looked up at the sky, bright blue with the odd paper thin cloud, and thought: Why not?

That was on July 22nd, 2016, on a solo trip to the German capital during one of its sweltering hot summers, exactly 29 days after the Brexit vote happened and four days after I’d turned 30. I was working at a newspaper in my hometown of Aberdeen, Scotland, and enjoying reconnecting to my family and childhood friends again after several years working in Glasgow.

But the vote changed everything.

“What if I don’t get the chance to do this again?” After coming back from my holiday I was sharing my thoughts with close family. I had spent time in Berlin in 2015 for a journalism fellowship and always felt I might want to come back in some way, shape or form, even if it was just for a few months or a year.

My mum, as patient as ever, considered the question. “Go for it,” she said, encouraging me to take the chance, to actually move to Germany. Her enthusiasm gave me butterflies in my tummy. It felt like it was now or never — which sounds very dramatic — but sometimes you need to have bold thoughts when you’re considering an action that will change your life.

Apart from the fact that the UK had voted to leave the EU and I envisioned moving abroad would be harder in a few years time without freedom of movement, there were other reasons. Müggelsee in Berlin, where it all began. Photo: DPA

There was my age. Thirty obviously isn’t old but maybe this landmark year spurred me on a bit; some probably call that a life crisis of sorts. There was the fact I hadn’t “settled down”. It seemed like some people in Aberdeen were a bit too concerned about this. Even neighbours of my parents were asking if I was married yet, and it was all getting a bit tiresome. No, I’m still not married, folks.

Another reason was I craved adventure. I wanted to try something new, something radical for me. I’d never travelled to far flung places or taken a year out. Moving to Berlin was my time for travel. I saw it like this anyway.

SEE ALSO: 'I am not alone': How Facebook's Brexit groups can be life-saving therapy for anxious Brits

After my decision, it took a lot longer to figure out how I would move — and I had no idea when it would happen. I had to make sure I had savings, think about what I could do in a country where, at the time, I only spoke a few sentences of the language.

All the while, Brexit was in the air but it felt so far away. Decisions were being made, (those were times when the government at least appeared to look like it was in control) like the official exit day was announced. Still, it didn’t seem real.

On my exit day from Scotland — Thursday January 26th 2017 — Neil Young was playing in the car to the airport, which I took as a good sign. My parents waved me off as I trundled through security sulking because the airline staff had made me empty a few heavy towels from my suitcase.

A couple of weeks before, I had made arrangements online to stay with a German woman in the southern Berlin neighbourhood of Neukölln. But as my departure date got closer I started to think the apartment didn’t exist and was part of a scam. The anxiety propelled me to have several website pages of Berlin hostels open on my phone. You always need a Plan B, right? Part of me wished my stopover in Amsterdam would last forever. I was quite content munching on sandwiches, drinking coffee, browsing perfume stands — stuck between two worlds, the UK and Germany, two places that were going to drift further apart in the coming years.

But I boarded my plane and we landed in Berlin an hour or so later. After a hairy taxi ride with a driver from Siberia, I finally found the apartment with my new flatmate inside. It was real and so was she.

I’ve been thinking about my journey since then. I planned to stay for three to six months as a first step. But the six-month mark didn’t feel like it was enough.

Arriving in a new country involves a process of getting lost and submitting yourself to all these new experiences. My first few weeks in Berlin were a haze of walking around in freezing cold temperatures feeling very aware of every movement, wondering if I'd made the right decision.

So, two years later: I’ve built a life here. I’ve moved flats, freelanced, learned new skills and gone to Berghain (once). I have a group of international friends, I’ve spruced up my language skills considerably and I have a job. It’s been difficult at times, as you’d expect, but I always keep in mind that it’s a privilege to be able to travel voluntarily. Not everyone is able to do this and I know how lucky I am to have a support network that got me to this position.

I feel settled. But not settled enough in the eyes of the politicians who run things because I don't have enough years under my belt to qualify for dual citizenship. Instead I, like many Brits across Berlin and Germany, am filling out residence permit forms that are meant to guarantee we can stay here after Brexit happens.

SEE ALSO: What you need to know about the Berlin Brexit registering process

At the same time, Germany is writing love letters to the UK telling the country how much it likes our tea-drinking ways, pantos and driving on the left-hand side (are those really our best parts?) Meanwhile, newspapers like the Sun are writing notes back, stressing Britain will still love German supermodels, supermarkets and sausages after Brexit.

You couldn’t make it up.

On the ground, here in Berlin, I’ve been fencing Brexit questions since I arrived. It was almost an icebreaker in the beginning.

“What’s wrong with that blond man and the woman beside him?” asked the German dude I bought my bike from in June 2017, referring to Boris Johnson and Theresa May.

Today we are no further forward. In conversations I’ve had with German people, May has been called a “tragic figure”, the whole process a “trainwreck”. The one-word question on the lips of German people has always been 'why?'. Why leave the EU? Why go to all this trouble to leave something viewed by many as a peace project, a business opportunity, a sharing space and a way of uniting in an ever-globalizing world with sprawling powers like China and Russia?

Why leave something that allows EU citizens to set up lives fairly easily in another country without having to rely on visas?

The why is tinged with sadness. Most people in Germany are in favour of the EU and it’s a bit of a cut to the bone to see the UK behave so violently against it. These past months have also exposed the British political elite in an unforgiving light to those abroad. British politicians seem unable to do their job, they say.

SEE ALSO: 'What a Brexshit!' How Germany is reacting to the Brexit deal defeat

May is desperate for renegotiation in Brussels, failing wildly on the Irish border issue, losing ‘meaningful votes’ in the House of Commons, grappling with votes of no confidence frequently. It looks bad to us Brits and it's also a damning picture we're painting of Britain to outsiders.

'You can't go back to the past'

It’s interesting for me to view my country from this foreign perspective. To see it through the eyes of people here. What has been encouraging is the British German community that’s come together over this.

SEE ALSO: How to exchange your British driving licence for a German one

Through my job at The Local I’ve spoken to lots of people in similar positions as me, and Brits who’ve been here a lot longer. I’ve read stories by my colleagues about the campaigning that’s taking place on all our behalves.

And Brexit, for what? So that the UK can become more isolated and more closed? So that future generations have an extra barrier to living abroad in Europe, the continent they are part of, that’s on their doorstep? Even if you come out of the EU you can’t stop globalization, you can’t go back to the past.

How unwilling the UK has been to face the world, and to take responsibility for global issues such as the refugee crisis.

The EU is more than just a giddy interrailing ride for students, of course. It’s flawed as an institution and its workings, such as the single market, should be questioned. But I can’t help but think if we’d put as much energy into examining how we want the EU to function in future as we did in Brexit negotiations it would be time a lot better spent.

Compared to those who've been here a lot longer, I probably couldn’t claim: Ich bin ein Berliner. But I can 100 percent say that I am an adopted Berliner, who has in particular taken a shine to the amazing halloumi kebabs that this city offers for €3 and that I am eternally grateful for.

I am also an adopted German, capable of recognizing the Bavarian accent and the Plaatdeutsch (Low German) dialect, as well as enjoying Swabian Maultaschen (amongst many other foodie things).

I’m British. I’m Scottish. And I’m European. In the words of Mel Gibson in his questionable portrayal of William Wallace in Braveheart: ‘They may take our EU membership, but they can’t take our multifaceted European identity.’