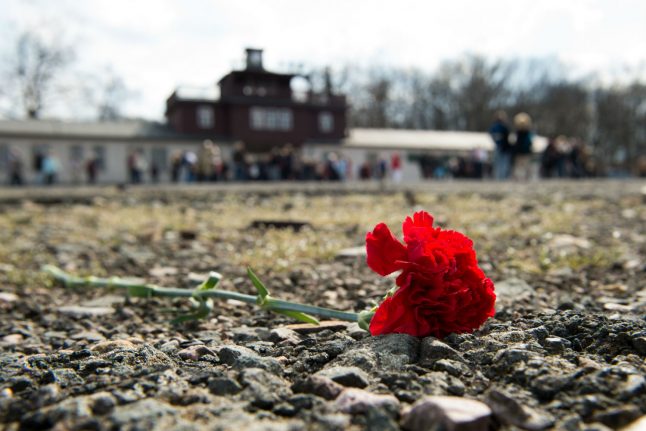 A flower left at Buchenwald in 2015. Photo: DPA

Plans to build a sausage museum at an annex of the former Nazi concentration camp Buchenwald Thursday sparked protests over a
“lack of historical awareness” in Germany.

An association called Friends of the Thuringer Bratwurst had announced  plans to move the Bratwurst Museum from its current location in Holzhausen to  Mühlhausen, where a theatre and a hotel will also be built. There is also a sausage hotel situated near Nuremberg, though from different private owners.

But the Mühlhausen site was once part of the Buchenwald camp, where the  Nazis imprisoned almost a quarter of a million people between 1937 and 1945.

Around 700 Jewish women were held in the outlying location that is to be  redeveloped into a tourist attraction.

The prisoners had been sent from the Auschwitz death camp to work in a weapons factory nearby, and warned that they would be returned to the death camp when they could no longer work.

Rikola-Gunnar Lüttgenau of the Buchenwald memorial foundation said the redevelopment plan showed a “lack of sensitivity” and a “lack of historical awareness”.

He said the foundation does not automatically rule out any plans to re-use the site.

“It depends on what is to be done there,” he added.

Amid the uproar, the local mayor is holding talks with the region's Jewish community as well as the memorial foundation.

An estimated 56,000 people died at Buchenwald. They were either killed by the Nazis or perished through illness, cold or starvation.

Thousands of Jews were among the dead, but also Roma and political  opponents of the Nazis, gays and Soviet prisoners of war.