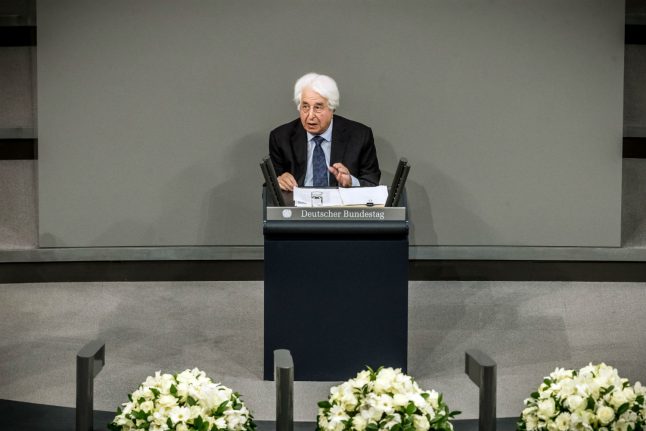 Historian and Holocaust survivor Saul Friedländer in the Bundestag on Thursday. Photo: DPA

“We all hope that you have the moral steadfastness to continue fighting for tolerance and inclusivity, humanity and freedom, in short for true democracy,” he told an almost full house at the Bundestag on Thursday in Berlin.

The 86-year-old spoke at a commemoration of the liberation of the German Auschwitz concentration camp by Soviet troops on January 27th, 1945.

“Anti-Semitism is only one of the scourges that are now creeping into one nation after another,” Friedländer said to the parliament.

“Xenophobia, the enticement of authoritarian practices of rule and, in particular, an ever-increasing nationalism are on the rise everywhere in the world in worrying ways.”

Friedländer, whose parents were murdered in Auschwitz and who survived as a boy in a Catholic boarding school in France, said that he hesitated at first when he received an invitation to address the Bundestag.

But then he accepted. “Why? Because, like many people worldwide, I see in today's Germany a country which has changed radically. Because thanks to its many years of transformation since the war, Germany has become one of the strong bulwarks against the dangers I have just mentioned.”

Friedländer's speech comes at a time when some say that Germany itself is experiencing a trend in populism and nationalism, with right-wing to far-right Alternative for Germany (AfD) political party now holding a spot in all 16 of Germany's state parliaments, and in the Bundestag.

On Monday, German chancellor Angela Merkel also made an appeal against nationalism in an acceptance speech on Monday evening for the Fulbright Commission's annual prize.

“Eighty years after the beginning of the Second World War, the lessons of history seem to be becoming somewhat paler and no longer have the same formative power…” she said.

“That is why we, those who bear responsibility today, must carry on the lessons of what the world experienced with the First and Second World Wars.”