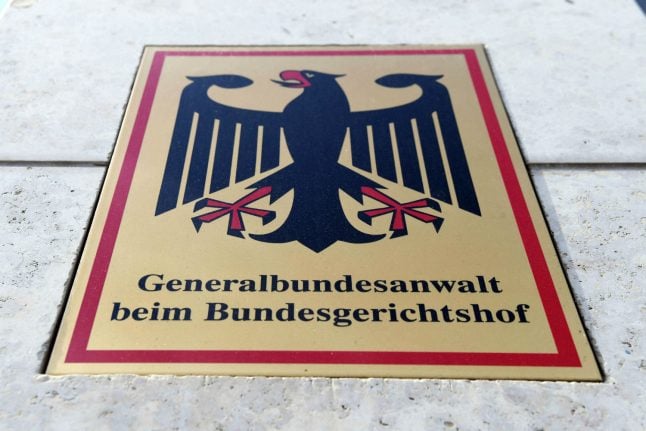 A sign for the 'Attorney General of the Federal Supreme Court'. Photo: DPA

The men aged 23 to 36 had been in the early stages of the plot and had not yet chosen a target or location for the attack, said prosecutors.

The investigators searched the apartments of other suspects in the states Mecklenburg-Western Pomerania and Baden-Württemberg. According to Spiegel Online, who first reported the arrests, the suspects are refugees.

A further investigation is required to see whether the men were involved in a terrorist organization. They will now be brought before the investigating judge at the Federal Supreme Court, who will decide if pre-trial detention is necessary.

The suspects were identified only as Shahin F. and Hersh F., both aged 23, and their alleged supporter, the 36-year-old Rauf S.

They were detained in early-morning raids in Dithmarschen, Schleswig-Holstein state, near the Danish border.

Shahin F. had allegedly accessed bomb-building manuals online and asked a contact in Britain to send him a fuse, a plan that was however foiled by UK police.

He and Hersh F. had also collected explosive material from fireworks, said authorities.

And they had asked Rauf to procure a gun, but rejected as too expensive a Makarov 9mm weapon on offer from a man identified as Walid Khaled Y.Y. in the statement.

Because the Iraqi men had wanted to use a vehicle in their attack, Shahin
F. had also started driving lessons early this year, said prosecutors.

Police units from several federal states and special units were deployed from 6:00 a.m. Wednesday morning onwards. According to information from public broadcaster NDR, the Iraqis lived in Meldorf, Schleswig-Holstein.

According to Spiegel Online, one of the suspects reportedly said that he wanted to meet as many “unbelievers as possible, but no children”.

The men did not develop their plan until they arrived in Germany in autumn 2015, according to Spiegel Online. They had received help for this from an unknown person via the encrypted messenger “Telegram”.