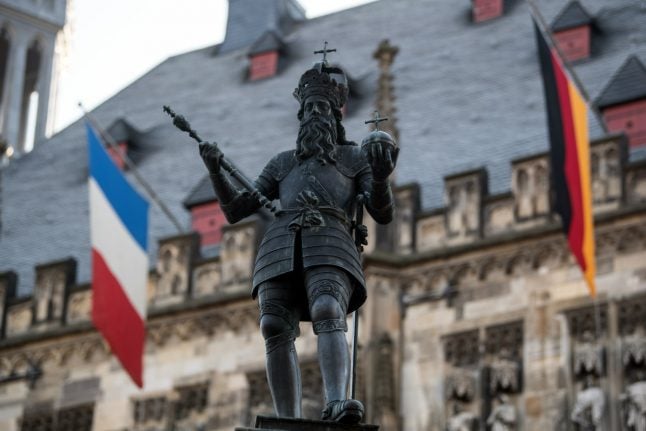 A German and a French flag hang behind the figure of Charlemagne at Aachen town hall. Photo: DPA

In the world of diplomacy, nothing is left to chance. So, when Angela Merkel and Emmanuel Macron met last week to sign a treaty between their two nations in Aachen as tensions rise in Europe with Brexit looming, the chosen venue had its own message to send.

Aachen, located in North Rhine-Westphalia, is where one of the towering figures of European history both lived and died, In choosing Aachen, they were invoking the so-called ‘Father of Europe’, Charlemagne, known in German as Karl der Große.

SEE ALSO: France and Germany seek closer bond with treaty ahead of Brexit

Born sometime in the 740s – records differ – Charlemagne was a Frank, one of the peoples who made the areas on either side of the Rhine their home.

Beginning before his birth, the Franks had sought to increase the area under their control, and Charlemagne – just Charles back then – was thus born into a martial environment and raised to make war.

Make war he did.

Along with his brother, Carloman, and encouraged by his father, Pepin, Charlemagne spent his adolescence and early adulthood involved in both military conquests expanding Frankish control and suppressing rebellions, until the death of Pepin in 768. At that point, Carloman and Charles became co-regents, ruling the Frankish kingdoms together, for three years until Carloman died.

Charles’ next target was the Lombards of northern Italy, precipitated by a failure of negotiations involving the Pope, opportunistic marriages and creating a buffer against the Franks. When the carefully laid plans of the Lombards and the Pope failed, Charlemagne and his armies swept down the Italian peninsula, taking the Lombard crown for himself.

Charles would then spend the next few decades taking his forces down into the the Iberian Peninsula, and, closer to home, eastwards into the territory held by the Saxons. In a series of bloody actions that wouldn’t seem out of place in the next installment of ‘Game of Thrones’, nobles and local dignitaries  were made to swear allegiance or be put to the sword.

Some chroniclers suggest that the sword was often used anyway.

By the time he was in his late thirties, Charles was the undisputed master of much of what is today Western and part of Central Europe. It was then that the most momentous event of his reign was to occur.

After the people of Rome had threatened to do some rather horrible things to the Pope Leo III in response to some grievances they had, in late 799, Charlemagne made the journey south to offer protection to the pontiff, who had fled into exile. The pair travelled to Rome, where Charles calmed the riotous cityfolk, and there, on Christmas Day, 800, Charles was crowned emperor of the Romans – the first in centuries.

Now, as the first 'Holy Roman Emperor’, Charles or 'Charlemagne’ ('Charles the Great') had the kind of unified control over the European Continent that hadn't been seen in more than three centuries.

Throughout this phase of his reign, Charlemagne would introduce a huge number of reforms. He attempted to standardize coinage across his empire, and while it didn’t last, it would be a significant project for his successors throughout the centuries to come.

He helped establish many monasteries as centres of learning, and promoted scholarship throughout all the lands he ruled – a decision that would pay dividends well into the Early Modern period. He changed standard military tactics to include many more mounted units, and arguably set the scene for the age of knights and chivalry. German Chancellor Angela Merkel and French President Emmanuel Macron wave from the balcony of the town hall in Aachen during a visit in May 2018. Photo: DPA

When Charlemagne died in 814, he left a European continent more unified, more stable than it had been since the fall of Rome. While there would be setbacks and stumbles following his death, the Holy Roman Empire would ultimately last a thousand years, until the beginning of the 19th century.

No wonder, then, that Merkel and Macron chose his favoured residence, Aachen, to sign their latest treaty. Neither could have helped but think of Charlemagne’s throne, sitting in its own chapel at the city’s cathedral. There, he would have often considered his vast holdings and attempted, somehow, to hold his hard-won possessions together, just as his political descendants attempt to secure the future of a fractious, troubled Europe Union.

EXPLORE: Charlemagne’s Throne can be viewed in the Aachener Dom / Domhof 1, 52062 Aachen, Germany.