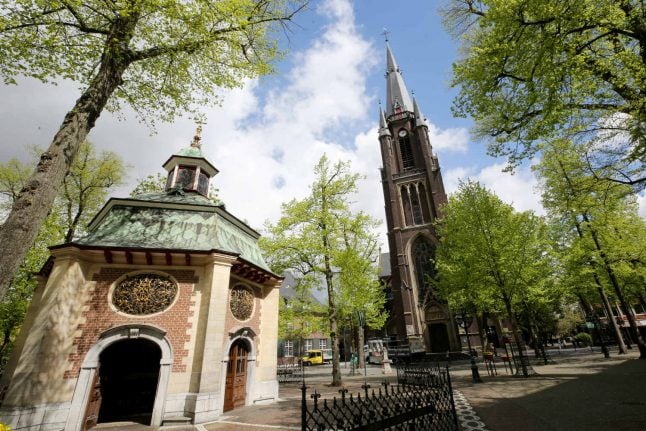 The Gnadenkapelle in North Rhine-Westphalia, with the St. Marien Basilika in the background. Photo: DPA

Over couple of thousand years, the inhabitants of the lands we know today as Germany have had a lot to deal with. War, plague, famine – and they’re just the headline acts.

Closer to home, fire, drowning, poisoning and animal attack were all not that uncommon, especially in areas outside the main cities. Death was never far away.

Is it any wonder then, that generations of Germans have made pilgrimages to places they believe sanctified and holy, even long before Christianity arrived?

Pilgrimages offered (and continue to offer) something that many ordinary folk were in desperate need of – reassurance and peace, the hope of a good afterlife.

Truth be told, however, it hasn’t taken much for Germans to establish a location as a destination for pilgrimage. Take what is known as the ‘Eucharistic Miracle of Wälldurn’, for example.

One day in 1330, it is written, a priest conducting Mass at the church of Wälldurn, in Baden-Wurttemberg, knocked over the chalice holding wine. To the amazement of the audience, supposedly, the spilled wine settled in a stain on the altar cloth that looked not unlike Christ crucified.

Within months the church had become a destination for pilgrims from miles around, coming to view the altar cloth, maybe taking a piece for their own good fortune. As centuries passed, demand became so great that a new, baroque basilica was built to handle the loads of visitors. The cloth is still on display there today, albeit with a few ‘cosmetic touches’ to make the image more visible. The alter at Wälldurn. Photo: Wikicommons

Bad Wilsnack, in Brandenburg, has a similar claim to fame. In the aftermath of a raid and fire that destroyed the village in 1383, three communion wafers, or ‘hosts’ were found in the smouldering embers of the church, miraculously unharmed. Again, within a short space of time, thousands of pilgrims were clogging the roads into Wilsnack, hoping to catch a glimpse of the wafers specially contained in a church paid for by their offerings.

Such was the excitement that not only did the local bishop order the church to start turning away visitors (to no effect, it turns out) but archaeologists to this day are finding small tin pilgrim badges that were thrown into a nearby river, as part of a pilgrimage ritual. Surprises in the Holy Cross Monestery

Augsburg, in Bavaria, has their own miracle involving a host. Back in 1194, according to local legend, a woman took her communion host home with her – a strict no-no. There, according to chroniclers, the host turned into bleeding flesh, as per Catholic doctrine.

When the (rather astonished) woman took the flesh back to the church, the priests declared it a miracle, and kept it for centuries of visitors to venerate. It’s still there, albeit a little air-dried, under glass, in the church of the Holy Cross Monastery. Kloster Heilig Kreuz. The view inside may be a little grimmer. Photo: DPA

Bones in the Basilica of St. Ursula

If it’s the body parts of saints you’re after, Germany doesn’t disappoint.

Perhaps the greatest collection of ‘holy’ bones in Christendom can be found in the Basilica of St Ursula, in Cologne. There, in the ‘Golden Chamber’, the bones of St Ursula’s 11,000 Virgins, supposedly massacred by the Huns, literally provide the wall decorations.

Bones and skulls cover nearly every surface, the windows casting a golden glow over everything. Despite the fact that the bones are now thought to be those of dead Romans, uncovered during construction of the cathedral, many still come as pilgrims to pray before the bones.

Skeletons, or saints, in Waldsassen

Full skeletons of saints feature as the centre of devotion in quite a number of churches. Special mention here must go to the Basilica at Waldsassen, in Bavaria, for their amazing bejeweled and armoured skeletons of who are, apparently, saints.

These skeletons were taken from Roman catacombs during the counter-Reformation and given to churches throughout the Holy Roman Empire, described as martyred saints meant to build faith and guard against the supposed heresies of Lutheranism.

The ridiculously ornate saintly skeletons of Waldsassen are most certainly items of devotion, and you’ll still have to brush past the odd pilgrim to take the perfect shot. A Catholic pilgrimage near Cologne

Not every pilgrimage destination has involved body parts though.

I’m quite taken by the small pilgrimage chapel at Kevelaer, North Rhine-Westphalia. It was here in the 1630s that a man had a vision of a chapel with a copperplate etching of the Virgin Mary, bathed in light.

Days later, his wife saw the same chapel in a dream.

When two soldiers turned up a few days, it is said, trying to sell an image matching the one they had seen, the couple knew they had to pool their money and build their dream chapel.

Their chapel proved to be an incredible success, drawing pilgrims from hundreds of miles, keen to see the Virgin Mary, which they dubbed ‘Our Lady of Consolation’.

Eventually the chapel had to be rebuilt and expanded to fit the crowds. Today it is one of the largest sites of Catholic pilgrimage in the north-western Europe, drawing busloads of the faithful each day.

Yes, some of these tales might seem far fetched, and questions do certainly remain regarding the provenance of some of the relics on display, but it simply cannot be denied that they have given aid and succor to millions over the centuries.

Some may doubt their veracity, but I believe Germany’s pilgrimage sites to be one of its great treasures – a living, breathing record of its spiritual and physical heritage.