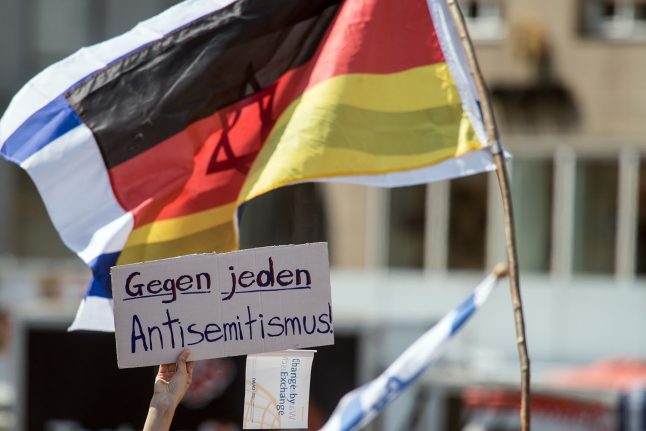 'Against all anti-semitism'. Photo: DPA

For many in modern Germany, anti-Semitism was considered to be a thing of the past – or at the very least banished to the ideological fringes of society.

But an increase of anti-Semitic incidents across the country in recent years – which have ranged from violent, targeted attacks to graffiti and vandalism – has raised concerns that not enough is being done to tackle the problem on a federal level.

As reported by The Local earlier in January, anti-Semitic attacks have increased significantly in recent years. In Berlin incidents tripled from 2017 to 2018, leading to concerns that anti-Semitism – long considered extinct or at least dormant and expelled to the societal fringes – was making a comeback in Germany.

Finding the true nature of the problem

Felix Klein, Germany’s commissioner for Jewish Affairs, announced the new centre late in 2018, saying it was necessary not only to counter rising anti-Semitism but to gain a full perspective of the true nature of the problem.

The platform has been developed in recognition that anti-Semitic attitudes – along with any other kind of racism or xenophobia – are not welcome in modern Germany. Therefore, countering anti-Semitism should be treated as a federal responsibility, rather than being left purely on the shoulders of the country’s Jewish community.

Klein – whose full official title is the Federal Commissioner for Jewish Life in Germany and the Fight against anti-Semitism – announced that the federal centre will draw together the existing reporting structure, which is administered mostly at a state level.

Antonia Schmid, Private Secretary to Commissioner Klein, told The Local that the project brought the fight against anti-Semitism under the one roof.

“The new (centre) is the federal union of platforms which already exist in several states. (The) project now works with several NGOs such as RIAS Berlin (Recherche-und Informationsstelle Antisemitismus) to put this all on a federal level and make it a federal network,” Schmid said.

When making a report, the platform will take the victim directly through to other services provided by the state or NGOs, such as the police to make a formal report or to counselling services. Currently, in many states these are not linked.

While five states (Berlin, Bavaria, North Rhine-Westphalia, Hesse and Schleswig-Holstein) have already established sophisticated reporting platforms for anti-Semitism, others are yet to do so. The platform is set to go live in February, with signing up then incumbent on the states.

“(The) federal network is designed the same as the Berlin platform, so that the data can be used on a federal level,” Schmid said.

One of the central motivations for the new centre has been the rise in anti-Semitism across the country, although not having a centralized data source has made it more difficult to discern the true nature of the problem.

Currently, the data on anti-Semitic incidents – from graffiti to violent attacks – comes through a number of sources, some of which are inherently problematic. This has led to potential inconsistencies in the way the data is collated.

“Most figures say that numbers are rising, which is definitely one reason for the platform. There has also been criticism of police numbers because they use certain categories that do not cover all incidents – they can’t cover incidents that aren’t illegal”.

Where incidents cannot be accurately categorized or recorded, it is difficult to develop effective policy to prevent further problems.

“(Historically) if an incident cannot be categorized, it has often been put into the category of right-wing (i.e. neo-Nazi) criminality. The police numbers state that 95 percent of incidents are being perpetrated by right-wing extremists, (however) the subjective perception of the people attacked says it differently, (they say) that it is mostly people of Muslim appearance,” she said.

“Therefore there is a gap between the perceptions and the police statistics.”

By making the reporting process clearer and easier across the country, it will be easier for victims to report incidents – which authorities suspect frequently go unreported.

“The new system is supposed to bridge this gap and make those incidents visible that are not reported,” Schmid said.

Schmid also said that the portal is necessary in taking on many of the myths surrounding anti-Semitism in modern Germany, primarily that it is being committed by asylum seekers and refugees.

“Number wise, it is not true at all (that asylum seekers or refugees from Muslim-majority countries are behind the increase)… if you look at the percentage of migrants compared to the rest of the population, it's a very small number that could be considered at all,” Schmid said.

“It has to be put in the perspective of taking the victims seriously… but there is no quantitative proof for these allegations.

Schmid said that drawing conclusions between new migrant arrivals and a rise in anti-Semitism was a lazy and inaccurate comparison to make.

“Of course lots of refugees from so-called Muslim countries come from states where anti-Semitism is state ideology – at the same time they flee from these countries and may want to get away from the ideology there.”

SEE ALSO: Are refugees to blame for a rise in anti-Semitism, or are they being scapegoated?