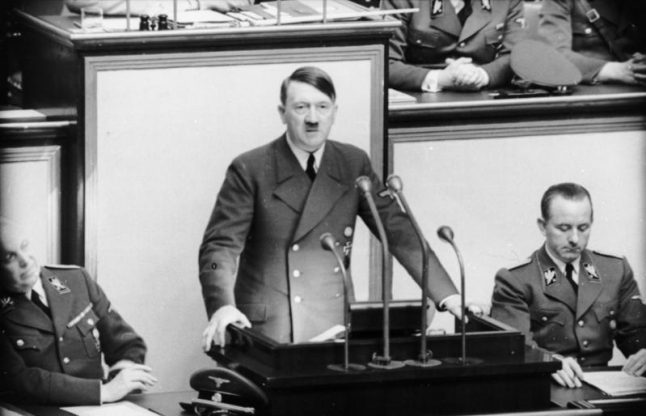 Hitler in the Reichstag on May 4th, 1941. Photo: Deutsches Bundesarchiv/WikiCommons

The Alpine and Rhenish landscapes, which depict a mountain scene, a river and a distant figure sitting beneath a tree, were dated 1910 and 1911 and were signed: A. Hitler. They were offered by the Kloss auction house.

Berlin police tweeted they had opened an inquiry into “attempted fraud” and “falsification of documents”.

The Berlin police tweet stating that they had seized three watercolours allegedly painted by Hitler from the auction house in the Pankow district of Berlin.

The starting price was €4,000 per painting, and each carried a seal of approval by an expert attesting their authenticity.

The Nazi dictator, who committed some of the worst crimes in history, tried to enrol in the Vienna Academy of Arts twice as a young man but was rejected for lack of talent. He continued painting, however, and copied landscapes from post cards which he sold to tourists.

A 2015 auction of Hitler watercolours and drawings in Nuremberg fetched nearly €400,000 euros.  A painting of Neuschwanstein Castle in Bavaria fetched the highest price in the lot, selling for €100,000. An example of work said to be painted by Hitler. This is the Neuschwanstein Castle in Bavaria auctioned off in 2015. Photo: DPA

German daily Welt reported that the paintings that were being auctioned in Berlin are “highly questionable” for several reasons.

The Rhine landscape is said to have been painted by Hitler in 1911. However, it is thought that Hitler visited the Rhine for the first time on October 22nd, 1914.

From the end of 1909 until the beginning of World War I in 1914, Hitler earned his living by selling watercolours and drawings, first in Vienna, then in Munich in 1913. They mostly showed local sights, sometimes landscapes, rarely still lifes.

The pictures have an average artistic quality – they were often copied from postcards. Hitler initially sold his work through his one-time business partner Reinhold Hanisch, primarily to art dealers, later also to stationary art galleries and frame dealers in Vienna.

It is unclear how many paintings Hitler produced and how much money he made. He was able to afford modest accommodation in various men's hostels, as well as regular visits to operas and operettas, although mostly in the cheapest standing areas.

There are estimates that Hitler may have made more than 2000 watercolors and drawings between the end of 1909 and the beginning of his career as a politician. The vast majority of them are said to have been created during the four and a half years he spent in Vienna and Munich, a few dozen more later while he served in World War I. Hitler was stationed with the Bavarian Army in occupied north-eastern France and in Belgium.

That would mean, however, that at least in Vienna and Munich he would have to have painted a whole, finished picture every day. This seems unlikely as the dictator would have had to work very regularly and efficiently – characteristics that were never typical traits of his, commented Welt. An example of a signature on the artwork “Nelkenstrauß” which is attributed to Adolf Hitler. It was auctioned off in Nuremberg on 12th June 2015. Photo: DPA

An extensive catalogee of work attributed to Hitler has been unearthed in recent times. Billy F. Price, a Texan businessman, has collected more than 750 of Hitler's paintings and has provided information on numerous other allegedly genuine Hitler pictures.

In order to check whether watercolours attributed to Hitler actually originate from him, art historical criteria isn't so helpful. The dictator was merely a moderately gifted copyist without his own style. Furthermore, in the 1920s and early 1930s his former business partner Hanisch eagerly produced pictures similar to Hitler's and signed them with the name of the man, who was at that point a prominent party leader.

The signatures also raise doubts about the authenticity of the pictures that were being auctioned in Berlin. The name “A. Hitler” can be seen on two of the three watercolours. However, it's not written in a fluid movement, as you would expect from a painter.

Meanwhile, the signatures on the artwork arguably look different from Hitler's real signatures before 1914, however very few signatures have survived from this time.

They also do not match his handwriting. Again, there are relatively few excerpts of Hitler's handwriting that can be identified as belonging to him beyond doubt.

It's fair to say that compared to other signatures on pictures attributed to Hitler, they differ very much.

In Germany, it is reportedly legal to sell paintings by Hitler so long as they do not contain Nazi symbols.

The police probe into the authenticity of the paintings in Berlin is continuing.