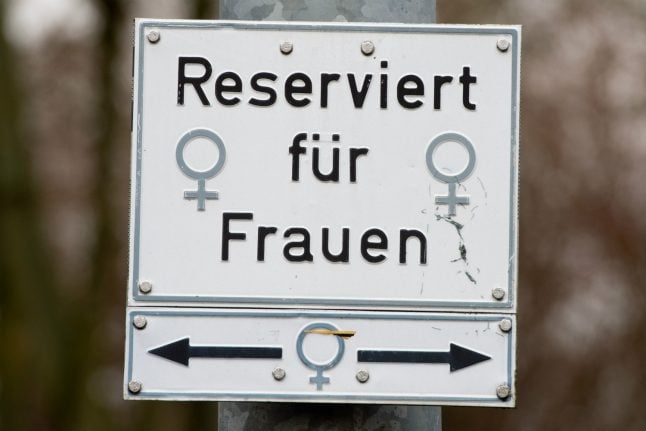 File picture shows a 'reserved for women' sign in a car park in Stuttgart. Photo: DPA

Dominik Bayer, from North Rhine-Westphalia,  said he was pursuing his goal of “equal rights for men and women” as he attended the hearing at the Administrative Court in Munich on Wednesday, reported Spiegel.

As well as being discriminatory against men, Bayer also asserted that the signs were offensive to women as they portrayed them as not being able to look after themselves.

Town officials argued that the signs are only a suggestion and men would not receive a punishment for parking there.

However, following a court battle, the wording of the signs will now have to be changed.

Equality is enshrined in Basic Law and the Bavarian Constitution. But in Eichstätt, Upper Bavaria, “double standards apply,” Bayer, 26, said. When he visited a friend in Eichstätt at the beginning of last year, he noticed that parking spaces were reserved for women.

Bayer decided to take action against it, and on Wednesday a compromise was reached in court. The outcome? The parking spaces aimed at women will remain, but will have to be signposted differently in future to ensure drivers know that it is only a recommendation for women to park there.

The decision to set up women’s parking spaces in public car parks in Eichstätt was taken after a woman was raped in the town in 2016.

For safety reasons, authorities identified a number of parking spaces for women in a well-lit area of a large public car park near the Old Town. The police agreed with the move, remembered Hans Bittl, head of the legal department in Eichstätt. Parking lot signs with the words: “only for women” were erected there.

The spaces are near to a care home where many women work, often having to do early morning and late night shifts, town authorities said.

“We did this purely for safety reasons,” said Bittl, saying women are more often victims of violent crimes than men.

Bayer added that men can also become victims of crime. Dominik Bayer, who felt discriminated against by women's parking spaces during a visit to Eichstätt and complained against them, is interviewed in the Munich courthouse. Photo: DPA

Signs should be changed

Bittl, however, pointed out that the signs are “merely information signs”. If a man parked there, he wouldn’t be forced to pay any fines.

Beyer saw his complaint, however, not only as an act for the well-being of men, but also women. The signs in Eichstätt would give the impression that “women are weaker,” he said.

After the arguments were heard the court came to a decision: that the signs might give drivers the impression that they are obliged to keep the parking spaces free for women, when they do not have to do so.

The court said the parking lots should be re-signposted. The town plans to change the signs by the end of February. The new signs should clearly show that it is only a recommendation for women to park there.

Bayer agreed to the compromise and that the parking places can remain.

However, further complaints in other cities are possible, if authorities in other areas do not stress that the parking spaces are only a recommendation.

Women-only parking spaces are commonplace around Germany, and often drum up controversy surrounding issues of discrimination and equality.

The ADAC, Germany's leading motorists' association, states that the female parking spots are not a formal part of traffic regulations, having the same status as parent-and-child spaces.

That means police can not intervene if a man parks there.

Women-only parking spaces in car parks are usually well-lit, watched by CCTV cameras and near the exits, the ADAC said.

In private supermarket parking lots and in multi-storey car parks, special parking facilities for women are common practice and regulated under private law by terms of use. There, providers have far more leeway than with public car parks.

Meanwhile, the Association for Women's Assistance and Emergencies (BFF), which supports women in counselling and against violence, emphasized the importance of women's car parks.

“The feeling of insecurity among women is often higher,” BFF spokeswoman Anita Eckhardt told Spiegel. “It is right and important that there are women's parking spaces and that they are not blocked by men.”