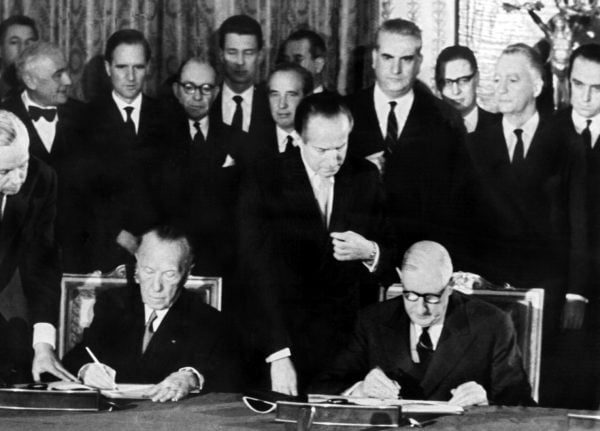 – May 9th, 1950: French Foreign Minister Robert Schuman proposes an organization pooling France and West Germany's coal and steel production. It leads, a year later, to the creation of the six-nation European Coal and Steel Community, a precursor to the European Economic Community and European Union.

– January 20th, 1983: In a strong signal of French confidence in West Germany, President Francois Mitterrand backs in its parliament the decision to locate American missiles on German soil in the face of Soviet missiles during the Cold War.

– September 22nd, 1984: Mitterrand and Chancellor Helmut Kohl stand hand in hand in Verdun, France, at commemorations of the death of French and German soldiers during the two world wars. – February 7th, 1992: Signature of the Maastricht Treaty, the basis of European Economic and Monetary Union, largely powered by Mitterrand and Kohl. A copy of the 'Maastricht Treaty' is displayed during the conference 'Twenty Years Treaty on European Union: Reflections from Maastricht', in Maastricht, The Netherlands in October 2013. Photo: DPA

– May 22nd, 1992: Creation of Eurocorps, an intergovernmental standing army corps which integrates the Franco-German brigade. A German and a French flag hang behind the figure of Charlemagne at the town hall in Aachen. Photo: DPA

– June 6th, 2004: Chancellor Gerhard Schröder becomes the first German leader to take part in the commemoration of the Allied landing in Normandy on the 60th anniversary of World War II's D-Day.

– November 11th, 2009: Angela Merkel becomes the first German head of government to commemorate in Paris the anniversary of the World War I armistice.

– June 6, 2014: On the sidelines of D-Day anniversary ceremonies, French leader Francois Hollande and Merkel foster a meeting between Russian President Vladimir Putin and Ukrainian president-elect Petro Poroshenko, in efforts to resolve a damaging crisis in their relations.

– July 13, 2015: Merkel and Hollande, at odds over how to deal with the Greek debt crisis, secure an accord with its prime minister Alexis Tsipras to keep Greece in the eurozone in exchange for tough austerity measures. – January 22nd, 2019: The signature by Merkel and French President Emmanuel Macron of a new treaty further strengthening Franco-German cooperation. It comes two months after joint commemorations of the 100th anniversary of the end of World War I and 55 years after their first friendship treaty. Angela Merkel and Emmanuel Macron embrace on November 10th 2018, as they attend joint commemorations of the 100th anniversary of the end of World War I. Photo: DPA