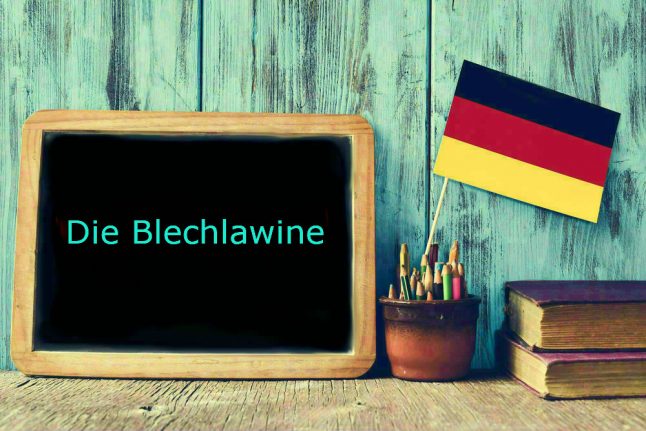 We all know the feeling when you finish up work, get ready to leave, jump in your car and, well, you don’t go very far.

Instead of cruising down the Autobahn listening to Taylor Swift, Helene Fischer or which ever music takes your fancy, you’re stuck, bumper to bumper, with a load of other cars, lorries and vans. You could call it a Stau (traffic jam) and you’d be absolutely right to. But you could also call it a Blechlawine if you wanted to portray a more vivid image.

So let's break it down: Blech means metal sheet, while Lawine is the word for an avalanche, something you might find in the Alps. But if you think about it, a large queue of cars filling up Autobahn lanes does kind of seem like an avalanche of metal. It's a very visual way of describing a packed road.

The most accurate translation in English is probably 'river of metal' or 'stream of cars'.

In a country that loves its cars as much as Germany there are even more ways to say traffic jam. One of those is the word Blechschlange, which means the same as Blechlawine.

Schlange is a super common German word that has a double meaning. It means snake but it's also the word for a queue. So there can be a long Schlange at the supermarket or a long Schlange of cars on the road. A Blechlawine or Blechschlange on the Autobahn near Hamburg last year. Photo: DPA

As The Local reported last week, a record 750,000 traffic jams were recorded on Germany's Autobahn system last year, the ADAC (General German Automobile Club) said. On average there were more than 2000 traffic jams per day.

Due to these Blechschlange, drivers were forced to a standstill for a whopping 459,000 hours – that's equal to about 52 years.

So although the Autobahn system is viewed as one of the best in the world, it's not plain sailing and there's certainly a lot of Blechlawine to wade through.

At the race the cyclists on their bikes had to wind through the traffic jams in the city.

An endless Blechlawine is rolling down the street.

Sorry I'm late, there was a traffic jam.