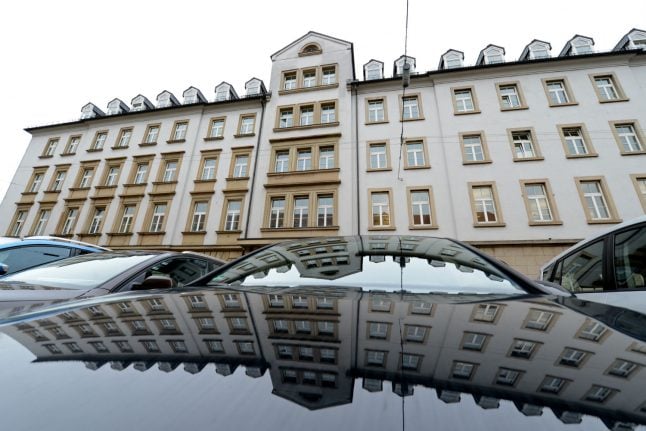 Hotel Silber mirrored in a car in 2014. Photo: DPA

From the outside, Hotel Silber seems to blend in with the town centre surroundings.

But the grand building, which was bought in 1874 by Heinrich Silber who went on to operate it as a hotel until 1919, has a rich history. In fact it was used by the Geheime Staatspolizei (Gestapo), the national secret police agency of Adolf Hitler's regime, for the interrogation and murder of political opponents, as well as for the deportation of Jews and gay people to concentration camps.

Between 1919 and 1928, Hotel Silber accommodated the Chief Post Office Directorate of Stuttgart. It transformed to the headquarters of the political police in 1928.

In the 1920s, each local department of the political police in Germany played a role in ensuring national security by keeping subversive groups and individuals under surveillance. Both the communist party (KPD) and the National Socialist German Workers’ Party (NSDAP, or Nazis) were monitored.

The political police assessed printed material and reports by “V persons” – Vertrauenspersonen or confidants who infiltrated organizations and reported their findings in secret statements. The Gestapo monitored and prosecuted people not considered part of the national community (Volksgemeinschaft), and thanks to the unprecedented extent of its power, it was able to carry out its goals with remarkable speed and efficiency.

Apart from political opponents, the Gestapo also monitored homosexuals, the Jewish community and social misfits. Relying heavily on civilian reports, it used a wide margin of discretion and scope for manoeuvre.

“Anyone can call the Gestapo”, said exhibition curator Friedemann Rincke, emphasizing how easy it was to report someone to the secret police. “Their number is in the phone book.”

Targeted people in “enemy groups” had no rights and were subjected to the whims of officials, who frequently used physical and psychological force.

From that moment, it was the central instrument of repression in the Reich and internment in a concentration camp became the ultimate threat.

Following dismantlement of their parties, communists and socialists had formed underground movements, where they continued their political activities. The Gestapo intensified its fight against conspirative networks using V persons, themselves often communists and socialists, forced to work for the secret police. By summer 1937, large numbers of illegal KPD members in Württemberg had been arrested. The death warrant of Ewald Funke, member of the KPD. Funke is arrested by the Gestapo in Stuttgart in May 1936 for creating a conspirative network for the KPD in South Germany. He is executed in March 1938. Photo: Kathy Quinlan-Flatter

Death warrants and other documents relating to political prisoners are on show in the exhibition, including the invoice for the burial of KPD official Max Stingl, at Dachau concentration camp. Stingl was betrayed by V man Eugen Wicker and arrested in May 1936. He commited suicide in October following severe torture, and the costs for his funeral were sent to his family.

Hans Scholl, co-founder of the 1942 White Rose resistance movement, was arrested by the Stuttgart Gestapo and interned in November 1937. Scholl held a leading position in the Hitler Youth, but was also involved in the prohibited “Bündische Jugend” movement.

During his time at Hotel Silber, his homosexual activities come to light and he was prosecuted under the infamous Paragraph 175a of the Reich Criminal Code, which made homosexual acts a crime. Scholl was released at the end of the year but he and his sister Sophie were arrested again by the Gestapo in February 1943, tried for treason and executed. By 1938, the Gestapo was subordinate to the Security Police, led by Reinhard Heydrich, which in turn reported directly to Police Chief Heinrich Himmler, and it held a wealth of information on the Jewish population.

In order to control and monitor people in this group, their exact whereabouts needed to be recorded. This proved to be an essential requirement for the subsequent mass deportation measures.

“With the outbreak of war in 1939, large numbers of staff were transferred to the occupied zones”, explains Rincke. “This means that manpower is lacking in Germany, thus increasing reliance on informants. During WW2, around 25 percent of all Gestapo staff are women”.

At the same time, the Gestapo was assigned new tasks – including assisting the criminal police in the deportation of the Jewish population and the genocide of Sinti and Roma people.

In the case of the latter, the police are responsible for organizing and implementing procedures, while the Gestapo is involved in confiscating the property of deported people. Hotel Silber recorded the measures in documents and photographs, several of which are shown in the exhibition.

The Gestapo itself organized the deportation of the Jewish population and by 1945, Hotel Silber had deported around 2500 Jews from Württemberg and Hohenzollern. Few survived the camps and there was little resistance to the deportations among the population.

Another essential Gestapo task was the surveillance of forced labourers – prisoners of war from the eastern occupied zones forced to work in the Reich.

“This group of people presented a risk to the national community,” says Rincke, explaining how the Nazis thought at the time. “Their ‘alien blood’ was not allowed to tarnish pure Germanic blood. It fell to the Gestapo to ensure that sexual relations were prevented between the two groups.”

The example of Rosa Weber, a 28-year old woman who fell pregnant by a POW working on her parents’ farm is explored in this part of the exhibition. Following a report to Hotel Silber in an anonymous letter from her village, she was prosecuted in January 1943, around six months into her pregnancy.

Legal regulations also provided the Gestapo with the ability to prosecute any criticism of the Nazi state and even comments made in private – particularly those undermining victory – could be penalized with a term in a concentration camp. Judenfrei: Map from a report by Task Force A for the period October 15, 1941 to January 31, 1942. Walter Stahlecker – chief of the Württemberg Political Police/Gestapo from 1934 to 1937, was head of Task Force A in the Baltic. Under his command, over 200,000 people, mainly Baltic Jews, were murdered. In 1942 he sent this map to Headquarters in Berlin as part of a report about the Task Force’s activities. Photo: Kathy Quinlan-Flatter

Stuttgart’s prisons were destroyed by Allied bombing in 1944, and prisoners were confined in Hotel Silber’s basement under inhumane conditions in overfilled rooms. In early 1945, the Gestapo staff prepared for the end of the Nazi dictatorship and the Allied occupation. Like other state departments, they destroyed almost all files and documents, and shortly before the end of the war, they murdered all prisoners held in Hotel Silber.

Many of the staff went underground.

Directly after occupation by French troops, the new president of the police and the municipal criminal police moved into Hotel Silber. Unlike the Gestapo, the police were not outlawed or prohibited by the Allies, although the French demanded that all former party members be dismissed, effectively dissolving the Stuttgart criminal police.

Many of those persecuted under the Nazi regime applied to join the new police services, eager to cooperate in setting up the new democracy.

However, it is not long before dismissed officials, often successful in presenting themselves in a more positive light, started to return to the police service, and those formerly persecuted now work together with their former persecutors.

Many of the prejudices and concepts of the Nazis therefore prevailed longer than the Nazi state itself.

NAZIS
Sophie Scholl: Remembering the White Rose activist on what would have been her 100th birthday
Url copied to clipboard!