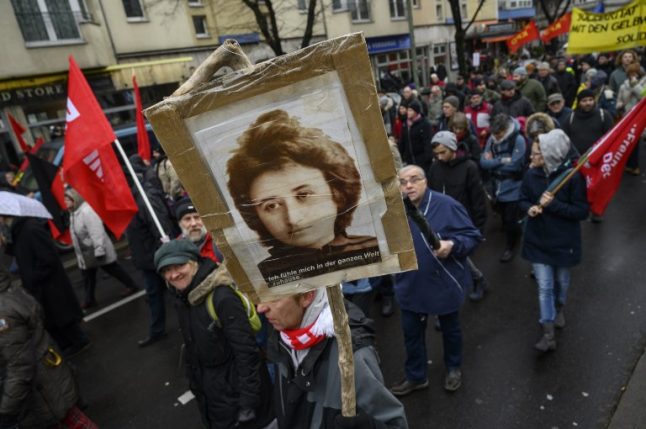 A leftist demonstrator holds a placard featuring a portrait of Communist revolutionary Rosa Luxemburg during a march to the Monument for the Socialists at Berlin's Friedrichsfelde Central Cemetery whe
The memory of “Red Rosa” and prominent fellow leftist Karl Liebknecht — also murdered in January 1919 — could bring together more than 10,000 people in the capital Berlin.
A whole week of events is planned for the commemoration, although local conservative politicians have tried to ban demonstrations honouring “enemies of democracy and free society”.
“Rosa Luxemburg arouses great interest among a very diverse public. There is no other historical tourist route with such varied participants,” said Claudia von Gelieu, a political scientist who guides visitors around the scenes of historic moments in Berlin.
“Pop icon”
Germany's main left-wing parties — the Social Democratic Party (SPD) and Left (Die Linke) — can together boast of less than 25 percent support in the polls after years of crisis.
The malaise is shared by their counterparts around Europe and elsewhere in the world, as many working-class people are increasingly attracted by nationalist or populist movements instead.
In Germany, the left has borne the brunt of voter departures from the political mainstream to far-right Alternative for Germany (AfD), especially in the country's formerly communist eastern states.
“The fact that Rosa Luxemburg was killed so early” — before Stalinism tainted the communist dream for good for many in western Europe — “made her an icon whose aura and influence remain intact,” said Free University of Berlin political scientist Stefan Heinz.
Left-wing daily Die Tageszeitung also dubbed her a “pop icon” on Saturday.
A journalist and talented public speaker, Luxemburg was born in Lublin, in Russian-controlled Poland, to a family of liberal Jewish traders. Admired by Lenin, she was a tireless interpreter of Marx. She travelled around Germany stirring up crowds, often standing precariously on a stool to speak.
For his part, Liebknecht was a social-democratic member of parliament who went down in history for declaring a “socialist republic” the day of the Kaiser's abdication.
Together, the two leftists created the Spartacist league, referring to gladiator slave Spartacus who led an uprising against Rome. Two weeks before the pair were murdered they founded the Communist Party of Germany (KPD).
The double killing on January 15, 1919, was the high point of a “bloody week” in the uprising of tens of thousands of soldiers, sailors and workers around Germany's World War I defeat in November 1918.
Demobilised former soldiers organised in so-called “Freikorps” killed Luxeumburg and Liebknecht and hurled their bodies into a Berlin canal.
A shaky SPD government that took power after the abdication of Kaiser Wilhelm II had turned to the Freikorps and their brutal methods to restore order in the fledgling Weimar Republic.
'Gulf' on the left
The violent repression and double murder slammed the door on cooperation between the social democrats and the communists, giving the Nazi party an opening on its march towards taking power in 1933.
Even today the division persists, with the SPD operating as junior coalition partner to centre-right Chancellor Angela Merkel while the Left — the successor to the official communist party of East Germany — battles both from the opposition benches.
In November, SPD leader Andrea Nahles admitted it was “likely” that Gustav Noske, the SPD defence minister at the time, played a role in the murders of Luxemburg and Liebknecht.
“The murders created a gulf between the radical left and the social democrats that still exists, even if it had appeared as soon as World War I broke out,” political scientist Heinz said.
During the Cold War, the East German government tried to capitalise on the two renowned left-wingers by building monuments in their honour.
Meanwhile in the West they were seen as tragic figures of the radical left that was finally betrayed by Stalin.
By AFP's Mathieu Foulkes