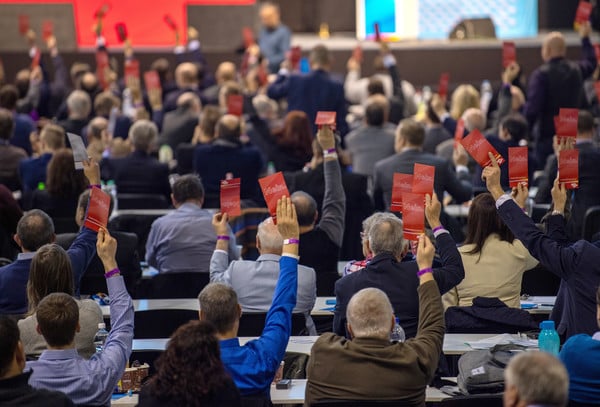 AfD members voted on their 'Dexit' position on Sunday. Photo: Monika Skolimowska/DPA
The decision marks the first time any party has called for “Dexit” — a German departure from the EU in the mould of Brexit.
If the EU is not reshaped in line with the party's ideas “in an appropriate timeframe”, Germany must leave the bloc, according to the draft manifesto agreed by delegates at a party congress in eastern Saxony state.
Congress attendees also voted through a call to abolish the European Parliament — the very Brussels body the AfD candidates will be campaigning to join this spring.
“We see nation-states as having the exclusive competence to make laws,” the text read, blasting the “751 privileged members” of the present European house.
While both demands are now in the draft manifesto, a final vote later Sunday will adopt or reject the entire campaign package.
Elections for the European Parliament will take place in May.
AfD was originally founded as a eurosceptic party, but rose to its current strength and representation in Germany's national parliament after right-wingers took over and switched its focus to opposing Islam and immigration. Like other nationalist movements around the continent, its leaders argue too much power has been transferred to Brussels, saying the EU has far outgrown its origins in economic cooperation.
“We don't need to abolish the EU, but bring it back to its sensible core,” AfD leader Alexander Gauland told delegates Saturday ahead of the vote, saying the party “has partners that would walk the path with us” like Austria's FPOe or Italy's Lega.
Concerned about scaring off potential voters in majority pro-EU Germany, party chiefs warned the congress against even harder proposals that would have called for an exit if AfD's reform demands were not imposed by 2024.