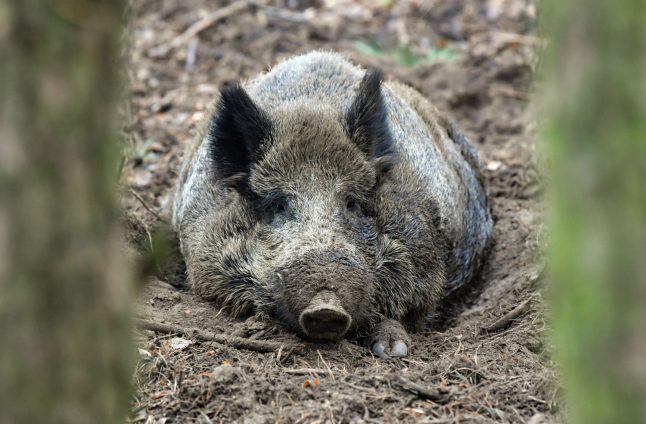 A wild boar in Brandenburg in December 2018. Photo: DPA

With their sturdy bodies, coarse hair and a menacing look at times, wild boars might not be the kind of animal you’d want to bump into during a relaxing forest walk.

Yet they might be living closer to you than you think.

That is if you live in some green German cities where wild boars can rummage around gardens, parks and even – as was the case last week in an astonishing moment – trundling down the street in huge groups.

On Sunday, around 25 of these Wildschweine were caught on camera racing down a pavement in Kleinmachnow, a suburb on the outskirts of Berlin.

The surprising incident made the news, and went viral. Another resident caught a video of wild boars (you can see it in the tweet below) – who are thought to be the same Kleinmachnow group – roving around gardens.

These animals are, in fact, not an unusual occurrence in Berlin and the surrounding area, which is sometimes dubbed the “wild boar capital”.

But it begs the question – why are these animals tearing through the streets, are they growing in numbers and are they dangerous?

In the community of Kleinmachnow and neighbouring Stahnsdorf, residents see the coarse hairy pigs, which live in the forest nearby, regularly.

According to the Berliner Morgenpost, people in Stahnsdorf say up to 20 boars often hang around the village square when it becomes dark.

There have even been reports of parents driving their children to school for fear of their kids coming into contact with boars, according to Heinrich Plückelmann, head of the SPD in Stahnsdorf.

Due to increased sightings it might appear that the number of these animals has grown.

But Derk Ehlert, a Berlin state wildlife specialist, says that’s not the case.

He estimates between 3,000 and 5,000 animals live in the German capital, a figure that’s remained stable in recent years.

“The number of wild boars has not risen, but they are currently actively searching for food,” he told the Local.

Ehlert said that due to the dry summer and autumn, there was less food than usual for the boars so they now have to feed in the winter, before the frost sets in. A female boar in the Tegel area of Berlin in 2016. Photo: DPA

But why are they coming into residential streets?

Ehlert described urban areas “like a supermarket” for boars because they “can have all the food they want”.

Dr. Milena Stillfried, of the Leibniz Institute for Zoo and Wildlife Research (IZW), did her phD on Berlin’s wild boar population.

Stillfried told the Local that when boars are hungry they dig for food in “gardens, parks or sports fields”.

“People don’t like that about them too much,” she said. “But for the wild boar it’s [the city] is a really good place to live.”

Stillfried described boars as “intelligent and flexible” and said they learn that “the city provides everything they need to survive”.

She added that “it’s possible for them to co-exist” with humans.

On the hunt for acorns

After she analyzed the stomach contents of boars for her studies, Stillfried found that they don’t go for garbage in the same way that other urban animals such as racoons or foxes do.

In fact, Wildschweine are always on the lookout for their favourite food: acorns, as well as insect larvae, which is what they find in the grass, a lot of plants and maize.

The boars can find this kind of food in well maintained gardens or parks in residential areas, which makes up for the fact they didn’t get their acorn fixes in summer and autumn.

Ehlert added: “They can smell food in the soil from more than 3,000 metres away.”

However, Ehlert agreed with locals that it was less common for boars to come into an urban area during the day, like they did in Kleinmachnow, and to run at speed.

“They dislike to run, they only run if there’s a problem behind them – maybe a dog or a hunter or a problem in the forest,” he said.

SEE ALSO: 'No longer fearful': How wild boars are thriving in Berlin

Ehlert, who has worked with the animals for more than 20 years, said wild boars are not usually dangerous but if they are running together then you shouldn't get in their way.

Stillfried agrees. “They are not really dangerous,” she said. “But in general you always need to be aware that it’s a wild animal and not a pet. If there’s a mother with piglets the mother will always protect her piglets.” Wild boars are regularly hunted by licensed hunters in Berlin and the rest of Germany. This is necessary to keep numbers down and to fend off any outbreaks of African swine fever, experts say, which has been seen in boars in neighbouring countries Poland and Czech Republic.

Germany has a rocky relationship with boars and there are regular debates on how many should be culled.

Cases of wild boars attacking people are rare but they do happen.

“It's usually when they’re injured in a car accident or something like that. Healthy wild boars will always prefer to run away instead of attacking someone,” said Stillfried.

In October of that year a man’s fingertip was torn off in the small German town of Heide, after two wild boars ran on a rampage for several hours.

Meanwhile, at the start of 2017 a herd of wild boars attacked several people, injuring three, near Berlin's Tegel airport.

Stillfried said the wild boar population is “growing worldwide”. No one knows how many boars live in Germany.

In Berlin, boars tend to live in Wannsee, Spandau, Hakenfelde Tegel and Köpenick. But they can also be found in Brandenburg and across Germany, especially in the northern city of Rostock and also in the east, said Stillfried.

For wildlife lovers it can be exciting to spot a wild boar – as well as other urban animals – as long as you're at a safe distance.

“They are really interesting because they are so smart,” said Stillfried. “It was a pleasure to study them.”