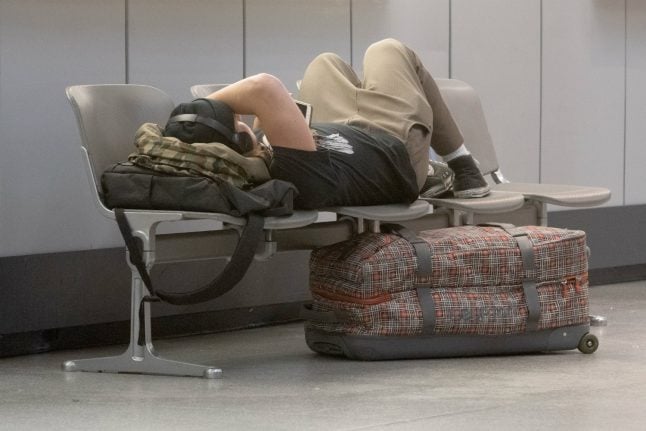 A passenger lies on a bench at Tegel airport during the strike Monday. Photo: DPA

The action, called by the powerful Verdi union at the German capital's Tegel and Schönefeld airports, started at 5am and ended shortly before 9am.

Around 80 flights were affected, according to DPA news agency, mostly at the city's main Tegel airport.

According to the arrival and departure boards of both airports, there were some delays lasting several hours as well as cancellations. In both airports around 400 security workers had gone on strike, the trade unionist said. German flagship carrier Lufthansa said it was cancelling four flights on its Berlin-Frankfurt route and four more between Berlin and Munich.

The roughly 850 passengers booked on those flights could use their tickets to travel by train instead, Lufthansa added.

“We regret that our passengers have to start the new year with disruptions,” Lufthansa board member Detlef Kayser told DPA. The so-called warning strike comes after Verdi, which represents some 23,000 airport security workers nationwide, said talks with the BDLS employers' association were deadlocked.

The union wants to see wages raised to €20 per hour for workers carrying out passenger, freight, personnel and goods checks at German airports.

Rates vary across the country but staff working in passenger security at Tegel and Schönefeld currently earn an hourly rate of €17.12.

The employers' association has offered wage increases of between 2.0 and 8.1 percent annually.

The union hasn't ruled out further strikes which could affect any airport in Germany. The next round of talks is scheduled for January 23rd.

“We now hope that the signals will be understood by the employers,” Verdi spokesman told DPA.