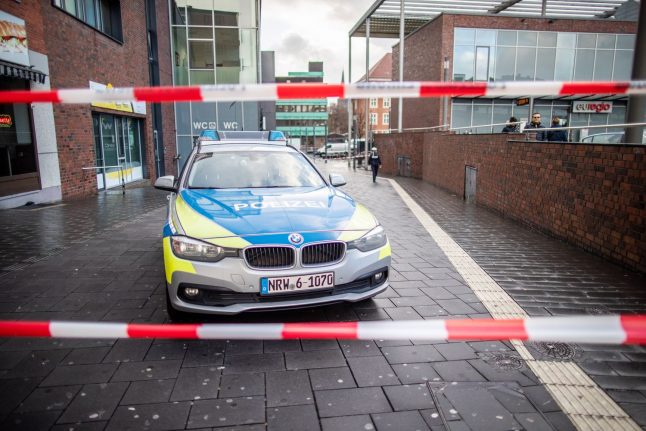 A police car in a cordoned off area at the site where a man injured four people after driving into a group, in what police described as an anti-migrant attack. Photo: Marcel Kusch / dpa / AFP.

DPA reported early on Wednesday that the man had previously been admitted to a psychiatric facility for schizophrenia.

The man drove his silver Mercedes into crowds in North Rhine-Westphalia, seeking to target people of 'foreign appearance'.

After injuring eight, the 50-year-old man drove south to the city of Essen, where he attempted a similar attack, without success.

Of the eight injured, one was in a serious condition but has now stabilised. Among the injured were Syrians and Afghans, with police in no doubt about the motives of the attacker.

He made “remarks hostile to foreigners” while being arrested by police, said officials.

“The authorities think that this is a targeted attack, motivated by the driver's hostility to foreigners,” said the Essen prosecutors office and Muenster police. Police on Wednesday charged the man with attempted murder.

Politicians in the region have called for calm, promising to bring the act to justice.

NRW Interior Minister Herbert Reul (CDU) said after the first interrogations of the detainee: “There was the clear intention of this man to kill foreigners.”

Essen Lord Mayor Thomas Kufen told the media he was horrified by the attack, saying “my thoughts and prayers are now with those affected and their relatives. I wish everyone a hopefully speedy and complete recovery”.

North Rhine-Westphalia's Prime Minister Armin Laschet (CDU) turned to the citizens via Twitter: “On this New Year's Day, the resolution for 2019 is clearer than ever: we stand together against right-wing violence. We will continue the fight against hatred of other people with all means of the rule of law.”

Earlier in 2018 a man drove a van into an open air restaurant in Muenster in northwest Germany, killing four. In 2016, a truck attack on a Christmas market in Berlin killed 11 people and injured 56 others.