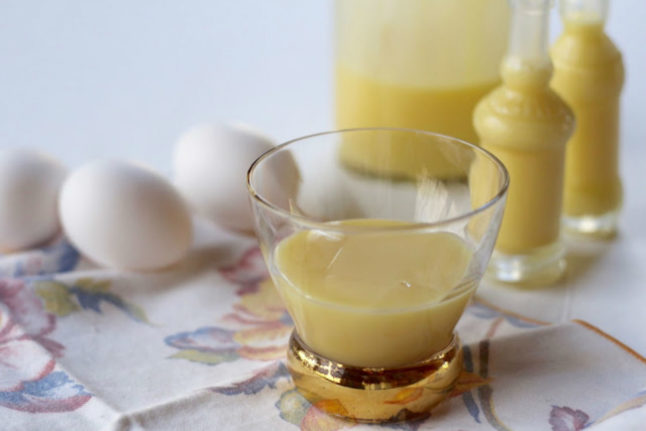 A bottle of homemade egg liquor is a multi-tasker. Serve it straight up or use as a baking ingredient in homemade cakes, custards and tortes. Fashion creative cocktail and mixed drinks using egg liquor as a base.

Below is a basic eqq liquor recipe and fun flavour twists to add to a homemade version. All use rum. However, feel free to swap out the rum for your favourite bourbon, cognac or whiskey.

For an alcohol-free version, similar to traditional egg nog, simply omit the rum.

Use white rum in the recipe for an Easter time version. At Christmas time, switch up the rum to a dark variety and add a few pinches of ground nutmeg.

▪ Place the vanilla beans or vanilla bean paste, the egg yolks and the powdered sugar in a stand mixer. Alternately, place the ingredients in a bowl and use a hand mixer. Either appliance should be fitted with the whisk attachment.

▪ Beat the ingredients until creamy, about 5 minutes.

▪ Add the condensed milk and rum and beat until combined.

▪ Beat the mixture over medium to low heat with a whisk attachment until thick and creamy. About 6-8 minutes. Be careful not to let the mixture boil.

▪ Transfer the egg liquor to a bottle, seal and place in the refrigerator until ready to drink. Swap out the rum for and equal amount of Amaretto. Rim glasses with almond flour or sprinkle pinches of almond flour over the tops of the drinks after pouring.

For the alcohol ingredients, use 177ml of white rum and 60ml of grenadine. Garnish with fresh pomegranate arils when serving.

Lora Wiley-Lennartz is an Emmy nominated television producer and a food/destination blogger who splits her time between Germany and New York City. Read her blog Diary of a Mad Hausfrau or follow her on Facebook for traditional German recipes with a twist.