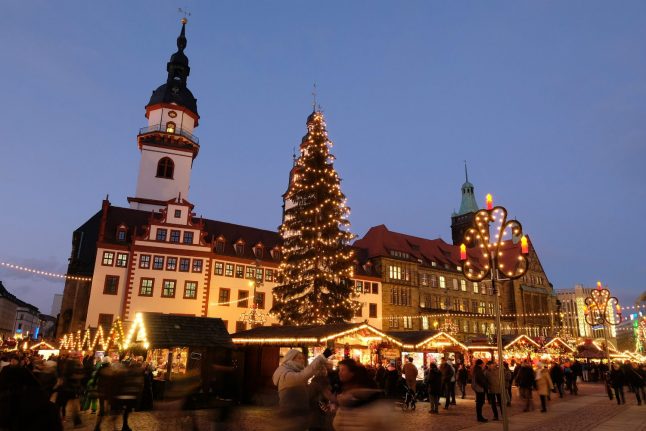 It’s hard to miss it: that huge bulging head that stands in front of Soviet-style buildings in the centre of Chemnitz. As I snap a picture of Karl Marx’s Kopf on a cold December day, I wonder what the philosopher would think of it if he was alive today. Then again, never mind the statue, what would Marx have felt about the East German and Soviet communist regime based on his ideology?

“Chemnitz was called Karl-Marx-Stadt,” our tour guide explains, “after the German Democratic Republic (GDR) changed the city's name in 1953.”

It was originally named after the river Chemnitz, which comes from the language of west Slavic people – known as Sorbs – and means stony or pebbled brook.

The philosopher had no connection to the town, but the GDR wanted to mark the 135th anniversary of Marx's birth as well as the 70th anniversary of his death – and it was a nod to Chemnitz’ industrial heritage. The tour guide tells us that a referendum held after the fall of the Wall in 1990 saw the city vote to change the name back to its original title.

So they got rid of the name but why not the statue?

“Most people don’t think Karl Marx stood for what was done in his name so they don’t mind the statue,” explains our tour guide. “He didn’t have a part in it. In fact, he was in favour of freedom.

It certainly does attract attention, even today during a hailstones shower, people are standing next to the 13 metre high bronze ‘Nichel’ – it’s local nickname which is the central German word for ‘head’ or ‘skull’.

But many will remember it from the pictures and footage showing large gatherings earlier this year, which attracted far-right groups and neo-Nazis.

It’s impossible to mention Chemnitz and not talk about the unrest that saw people take to the streets, many carrying Germany flags and some making Nazi salutes, in protests against immigration at the end of August and beginning of September. It’s something every person I meet in Chemnitz brings up because they feel strongly about it, usually angry or ashamed.

Those anti-foreigner scenes are still fresh on the minds of citizens and many people feel tension is still bubbling away just above the surface, ready to pop up at any moment. (I intend to write about this topic in more depth in another feature on Chemnitz for The Local.)

For now we leave Marx behind and walk through the town that was almost completely destroyed in World War II, and has been rebuilt.

We visit the Roter Turm (Red Tower), which is all that's left of the former city wall. We also head to the castle of the old Benedictine monastery, in the Schloßchemnitz area, which is where the whole city began in 1136.

Over the course of its four hundred years, the monastery has been rebuilt several times. However, some original architectural details have been preserved, such as the cloister in the east wing. It now houses the Schloßberg Museum.

Chemnitz has a raw feel to it and traces of the former East are visible in the communist-era flats and government buildings. Throughout our trip we are told often that Chemnitz is a city that produces. It’s a city of workers. Whereas Leipzig is seen as an artistic, cultural booming city, and Dresden is viewed as a place that’s handsome and somewhere you would spend money, Chemnitz is the Saxon industrial hub that's getting on with it.

All over the city there are traces of industrial life: of factories and sprawling buildings that housed cloth mills to accommodate the Saxon textile industry for spinning, knitting and weaving. The history of the Saxon region, a big chunk of which includes car production too, is documented at the Saxon Museum of Industry in Chemnitz.

Although there is no black chimney smoke hanging over the city now, work is still a major theme. We meet local government workers who say unemployment has fallen by around 50 percent since reunification, to about 6 percent.

Earlier in the trip I had met an artist who told me the abandoned factories are prime sites for exhibition spaces and parties in the same way artists reclaimed space in Berlin and Leipzig in the 90s.

In fact, art is a big theme in Chemnitz. It’s where a biennial multimedia art festival called Pochen, which is a nod to the region's mining past as workers used to 'Poch' – 'tap' to extract materials, recently took place. Another event called 'Aufstand der Geschicten' (Uprising of Stories) also aimed to showcase different narratives of Chemnitz.

It is worth checking out the Kunstsammlungen Chemnitz, a collection of art, spanning different locations in the city. We visit the Museum Gunzenhauser, which is home to a huge diverse assortment of art. I'm drawn to the pinks and oranges used by artist Rupprecht Geiger and the intense paintings by Alexej von Jawlensky.

The curator tells us about the events the museum has been hosting that involve refugees and asylum seekers. The staff also organize concerts, from punk rock to classical, and they even have a democracy quiz scheduled. Their aim is for inclusion and they want to show there's more to Chemnitz than hostility. Visitors at the Museum Gunzenhauser of the Kunstsammlungen in Chemnitz look at the work “Pinc contra orange (I, II)” by Rupprecht Geiger. Photo: DPA

Chemnitz is on the northern foothills of the Ore Mountains. Around a 45 minute drive up into the mountains you'll find another side to Saxony in the enchanting Annaberg-Buchholz.

The small city is made up of Annaberg and Buchholz, which were merged together in 1945. This mining area used to produce silver, tin and cobalt.

The mining legacy is on display in the windows of almost all the homes we pass, in the form of an archway of candles with little figures depicting a mining scene in the middle. It was said that the women of the town used to place lights round their doorways so their husbands would know the way home from the mines.

It’s not hard to see why the Ore Mountains are referred to as the ‘land of Christmas’: Annaberg-Buchholz has one of the most beautiful festive markets I’ve ever seen, with unbelievable attention to detail.

Through a biting wind, we follow the lights from the church at the top of a hill down to the old square and market, which is a feast for the senses.  The market itself is filled with Glühwein and other food stalls stacked with stollen and marzipan. There are also stands packed with decorations and a beautiful large Christmas trees stands in the middle.

Locals munch on sausages in buns, while a pipe band plays Christmas carols.

The mayor tells us that the area is trying to attract more young people to settle down. It's a theme experienced across eastern Germany, which has struggled to keep its population afloat since reunification, although things are much better today compared to the 90s.

As we leave the town, the lit-up arches fade into the distance, lighting up the valleys in a magical way.

Can the city shake off its reputation?

Back in Chemnitz, there is only one thing for it: to eat.

You'll find lots of nice restaurants in the town. During our trip we ate at the Pentahotel in Salzstraße, Janssen in Schloßstraße, Heck-Art in Mühlenstraße which served smooth roast chestnut soup and Safran in Promenadenstraße for delicious Persian cuisine.

Safran was targeted by far-right thugs in October and the owner Masoud Hashemi was injured in the attack. The perpetrators also reportedly scrawled Nazi symbols on the wall. As we eat roasted aubergine, fragrant rice and pitta bread with dips, Hashemi tells us that these people are a minority and he's determined to carry on with his life.

Back at Marx's head, which features the call to arms: 'Workers of the world unite' in four languages behind it, we wander round to a quaint Christmas market and I contemplate the city, its surroundings and its various sides.

Everyone I've met is proud of being from Chemnitz (or Karl-Marx-Stadt depending on the year they were born) which is positive to see. With so much going for it when it comes to culture, food, art, history and industry, it seems sad that hostility keeps rearing its ugly head.

But many people are trying to shake this image off. The question is: can the whole city unite and stand against racism and discrimination?