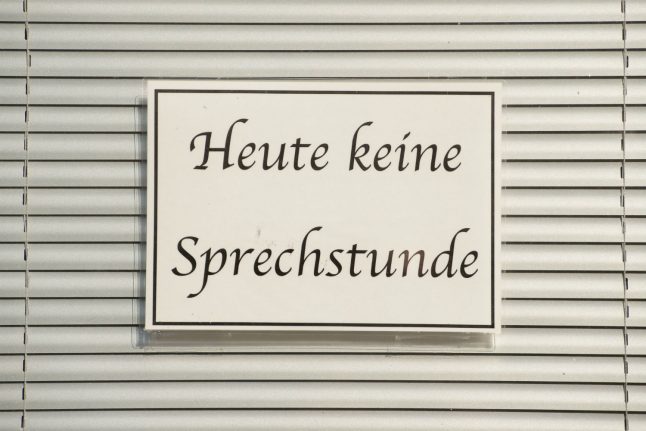 A sign in Bautzen, in Saxony, says "Today no office hours." Photo: DPA

“Sicknesses do not depend on the favourite opening times of the established physicians,” Johann Magnus von Stackelberg, vice president of the GKV board, told DPA on Thursday.

He urged that public physicians provide more “patient friendly” consultations for the many who have difficulty making it to appointments during the limited times offered.

SEE ALSO: Everything you need to know about making a doctor's appointment in Germany

On Wednesday and Friday, the majority of practices are closed in the afternoon and in the evening, as well as on weekends, said von Stackelberg.

“No wonder that more and more people are going to the emergency rooms of hospitals,” he said.

According to a survey conducted on behalf of the GKV, 20 percent of practices have consultation hours on Wednesdays between 2 p.m. and 5 p.m. and less than 20 percent have them on Fridays.

Still, about half of all practices offer consultation hours after 6 p.m. on Monday, Tuesday and Thursday. (Monday 9 per cent, Tuesday 10 per cent, Thursday 12 per cent).

Von Stackelberg said that many doctors should follow the good example set by the 10 percent of practices that offer consultation hours between 7 and 8 p.m.

According to the survey, only one to two percent of practices offer consultation hours between 8 a.m. and 1 p.m. on Saturdays. Around 85 percent of people in German are on public health insurance, which covers the cost of most doctor's visits.

In the survey, however, 99 percent of doctors stated that they also treat private patients during office hours.

The insurance companies also warned that if doctors only offer the minimum number of 20 consultation hours per week, they are not allowed to treat private patients or sell private services during this time.

“For private business, additional dates and consulting hours must be offered,” said von Stackelberg.
In order for there really to be enough consultation hours, it would also be necessary to specify more clearly what is possible within this framework and what is not, he said.
Sometimes there are only enough doctors on paper, he added – for example when ophthalmologists perform operations most of the time and therefore have no time for simple illnesses or routine examinations.
Do you feel that German doctors should offer different hours? If so, what would the ideal set-up be? Tell us in the comments!