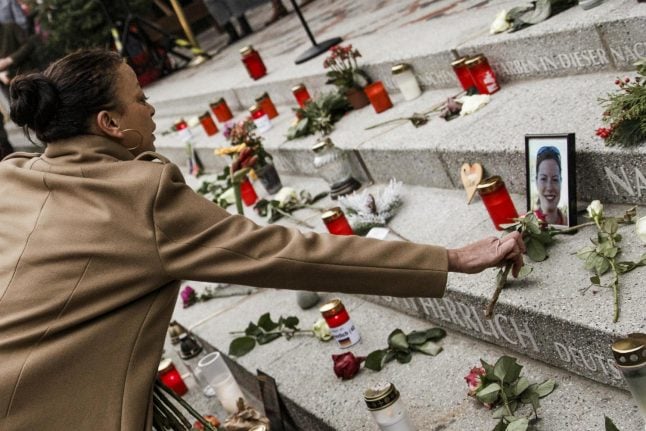 A woman lays a rose on the steps of the Kaiser Wilhelm Memorial Church on Wednesday. Photo: DPA

The smell of Glühwein, roasted almonds and the sound of Christmas classics: Breitscheidplatz looks and feels similar to other Christmas markets across Berlin and Germany.

However, the protective ring, made from concrete barriers, steel pedestals and sand-weighed mesh baskets, which were installed as extra security measures at the end of last month, is a tell-tale sign that something is different here.

It is the site where, exactly two years ago, on December 19th, 2016, terrorist Anis Amri, from Tunisia, hijacked a truck, killed its Polish driver and drove the vehicle through the market, claiming 11 more lives and wounding more than 70 people, some severely.

He was shot dead by Italian police while on the run in Milan, four days after the attack, which was claimed by the terror group known as Islamic State (IS). Investigations into Amri and how it happened are continuing.

On the steps at the front of the Kaiser Wilhelm Memorial Church, also known as the Gedächtniskirche, a metre-long, gold decorated crack engraved into the stone is a memorial to the 12 people who died because of Amri’s actions. Their names are engraved around it, as well as the countries they come from.

An inscription on the memorial reads: “In memory of the victims of the terror attack on the Christmas market on December 19, 2016. For the peaceful coexistence of all people.”

On the second anniversary a series of commemoration ceremonies are happening to remember the victims, reported the Berliner Morgenpost.

At 10 a.m a silent wreath laying attended by people affected by the attack and relatives of the victims took place. Berlin mayor Michael Müller as well as the President of the House of Representatives, Ralf Wieland, and Berlin Victim Officers, Edgar Franke and Roland Weber attended.

Mourners and onlookers gathered round the steps of the church and stood in silence to remember those who died. People also laid roses next to photos and candles. Michael Müller, mayor of Berlin, and the President of the House of Representatives in Berlin, Ralf Wieland, lay wreaths on Wednesday. Photo: DPA

Pastor of the memorial church, Martin Germer said at the ceremony that they had gathered “to commemorate the 12 people who were suddenly ripped from their lives that night, and with them the many who suffered severe and sometimes permanent injuries”, reported the Tagesspiegel.

Germer greeted the relatives of victims as well as anyone else affected by the tragedy.  “And I would like to extend a particularly warm welcome to all those who have come to this place for the first time today, and who in some cases have travelled a very long way to come here,” he added.

Pastor Germer was referring to relatives who had come from Israel and Italy.

“Day after day, many people stop at this place and express their sympathy,” Germer added. “With them we bow our heads and remember.”

The sermon was translated into English. A minute's silence was then observed in memory of the victims and their families.

After the commemoration, relatives were able to meet in the chapel with the victims' representatives and pastors for a private conversation.

Richard Naumann, district mayor of Charlottenburg-Wilmersdorf, said people in the district where the attack took place thought about the attack but did not live in fear.

He told The Local: “I know from my many contacts with citizens that people are very aware of the terrorist attack. However, this is not a permanent feeling of fear, but a sad experience of the vulnerability of our open, liberal society and its way of life. And of course it was no coincidence – it was the perpetrator's intention, to crash into the Christmas market near the Kaiser Wilhelm Memorial Church in the heart of the German capital and our city.

Naumann said he was attending the memorial services today. He added that it was nice to see how the memorial at the church had become a place for people to be contemplative, every day of the year.

“Again and again people stop and pause in remembrance, not only today on the second anniversary,” Naumann said.

At 4 p.m. in the chapel of the memorial church there was a Gesprächsrunde – a round table discussion – with the victims and their relatives, with the victims' representatives Edgar Franke and Roland Weber. The public is not allowed to attend this event, reported the Berliner Morgenpost.

Later, at 6 p.m. an evening prayer is due to take place in the memorial church, commemorating the victims of the terrorist attack of two years ago. The service is being delivered by Pastor Martin Germer.

At 8:02 p.m – the exact time that the truck was driven by Amri into the market – one of the bells of the memorial church will strike twelve times in memory of the twelve victims.

The Christmas market remains open on Wednesday. The stall operators were involved in the planning of the anniversary commemorations.

Two years later, questions remain unanswered over the Breitscheidplatz tragedy. Authorities are still trying to clarify the background to it and how it happened.

Investigators have long suspected that Amri had helpers for the attack and that he was also supported in his escape, but have not been able to prove it. It is clear that Amri was involved in a terrorist network – possibly even before his arrival in Germany in 2015, reported the Berliner Zeitung.
But it is still unclear why Amri could not be stopped even though he was known by the police and the secret service.

Among other things, Amri is suspected to have been involved in preparations for one or more bomb attacks in the summer of 2016, which were reportedly foiled by police.