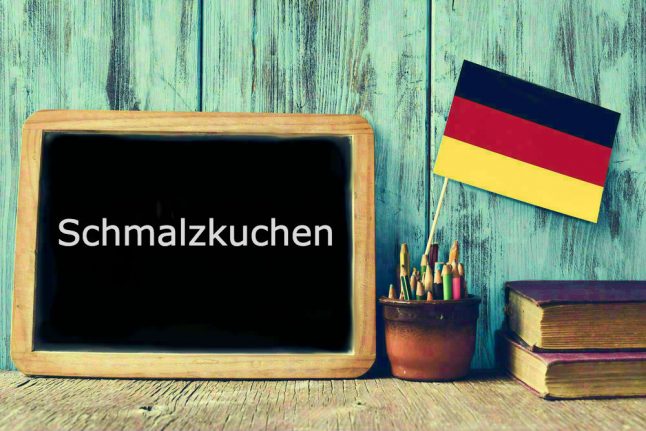 If you’ve spent a holiday season in Germany, chances are high that you have stumbled across a bag full of Schmalzkuchen on one of the numerous Christmas markets.

And nowadays, lard isn’t the traditional way of frying them anymore. As vegetarianism is continuously rising in Germany, it becomes more and more common to fry the cakes in vegetable fat.

Schmalzkuchen can be bought in different sized bags – from the small “I’ll just have a nibble”-portion to the big “enough for a family of five”- portion – mostly for quite reasonable prices for a Christmas market.

Caution, though: There’s a lot of powdered sugar on the cakes. And a lot in this case means A LOT. If you try to cool down the cakes by blowing gently in the bag or even if you let out an uncontrolled breath, chances are high that your face, your clothes and everything in a one-metre-radius will be covered in sweet powder.

Now, people that are not from the north of Germany might not even know what this article is about based on the title. That is because the greasy donuts are one of the things in Germany which name varies depending on the region you’re in. For everybody who is confused, here is a short overview:

In parts of Northern Germany (especially Lower Saxony and Bremen, they’re called Schmalzkuchen or Schmalzgreben. If you’re from Potsdam or Lübeck, you might know them as Mutzen.

In Saxony, where cooking the cakes in lard is more common than elsewhere, they are called Kräppelchen, which is connected to the word Krapfen (a jam-filled donut.) If you are based in Franconia, however, you might know them as Striezel. A woman indulges in Schmalzkuchen at a Christmas market in Hanover. Photo: DPA

My favourite food on the Christmas market is donuts.

In Leipzig, the donuts are called “Kräppelchen.”

Do you know more names for Schmalzkuchen? Let us know in the comments below!

Führungen dürfen aus Rücksicht auf die Teilnehmer nicht aufgenommen werden.
Out of consideration of the participants, tours may not be recorded.
Er will tun, was er möchte, ohne Rücksicht auf die Anderen.
He wants to do what he wants, without considering other people.
SHOW COMMENTS
Url copied to clipboard!