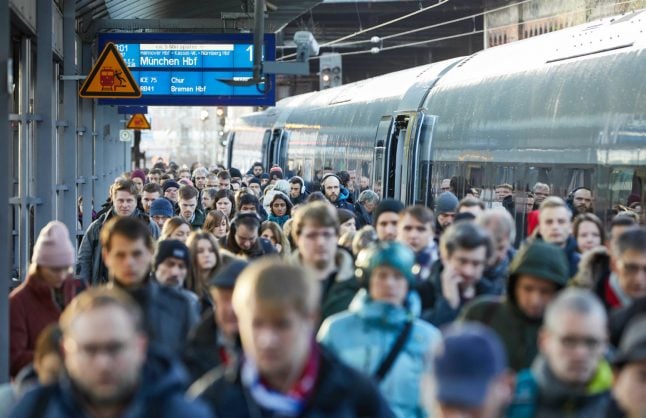 Passengers in Hamburg on Monday morning feeling the effects of the rail strike. Photo: DPA

High speed ICE trains were cancelled throughout the country due to the four-hour strike which began at 5am. Deutsche Bahn (DB) said regional services were also affected, while the S-Bahn network was also hit by the strike.

Meanwhile, the strike, which was being held over a pay dispute, also had an impact on other forms of public transport such as U-Bahn services and buses as stranded passengers piled on to them.

Some 1,400 trains, including cargo services, were affected, DB said, adding that both sides had agreed to return to the negotiation table on Tuesday.

The industrial action came after talks broke down Saturday between the DB and the EVG railworkers' union, which is demanding a 7.5-percent salary rise for 160,000 employees.

“The next move is now up to Deutsche Bahn management.”

The strike also impacted DB customer services offices, meaning that in many stations passengers were left without information over loudspeakers or display boards.

The suspension of long-distance traffic lasted until the strike officially ended at 9am, a spokeswoman for the company told DPA.

However, there will be huge restrictions in the nationwide rail network throughout Monday. Travelling should, if possible, be postponed until Tuesday, rail bosses recommended. DB said that purchased tickets would remain valid until next Sunday (December 16th) or could be refunded.

It came after DB pushed prices up of its tickets by an average of 1.9 percent. The Berlin U-Bahn was more busy than usual as commuters and other passengers tried to travel on Monday during the rail strike. Photo: DPA

Major transport hubs like Berlin, Frankfurt, Cologne and Munich were among those impacted by the walkout.

In the southern state of Bavaria, all rail traffic was suspended, DB said. Only the main line of the S-Bahn in Munich was in operation, said a spokeswoman this morning.

At Nuremberg station, in the southern state of Bavaria, some 50 rail workers were seen demonstrating in yellow high-visibility vests, similar to the ones donned by anti-government protesters in France.

It is not unusual, however, for German rail staff to wear hi-vis jackets, and it was not immediately clear if the demonstrators intended to signal a link with the French street protests.

“One for all and all for one” read the signs held aloft by the demonstrators.

In North Rhine-Westphalia, regional traffic was largely at a standstill. Only some parts of the state had rail traffic, a railway spokesperson told DPA.

The EVG strike also affected the southwest. A spokeswoman for DB said the entire regional traffic network was severely disrupted. “In the Baden area, regional traffic has more or less stopped at the moment,” she said.

Rail traffic in Hesse was also brought to a standstill. Only a few trains were in operation, a spokesperson for DB said. The Rhein-Main Verkehrsverbund (RMV/Rhine-Main Transport Association) stopped all operations for nine S-Bahn lines early this morning. Meanwhile, Frankfurt main station was also affected. In Cologne, passengers were eager to get on the first trains after the strike had ended. Photo: DPA

There was also huge disruption on the Berlin S-Bahn network, which is owned by Deutsche Bahn. A spokesman said that only about a third of the normal supply of trains could operate. “We are trying to maintain a service during the strike,” the company said at the time.

Passengers in the capital were asked to switch to subways, trams and buses which resulted in some overcrowding.

Pay negotiations between Deutsche Bahn and the EVG railworkers' union, demanding a 7.5-percent salary rise for 160,000 employees, ended without agreement on Saturday.

“The employer made offers which did not correspond to the demands of our members,” said EVG negotiator Regina Rusch-Ziemba. At Hannover main station, railway workers held up a banner saying they were on strike and others held placards calling for fairer wages. Photo: DPA

DB shot back and described the strike as a “completely unnecessary escalation”, insisting its offer was “attractive and met the main demands” of employees.

Deutsche Bahn in a tweet also denied it had broken off the negotiations, charging that “the EVG left the talks and went on strike”.

“DB remains ready to continue the negotiations at any time. There is an open invitation for today,” the firm said.

For more information on the strikes in your area visit the DB updates page.