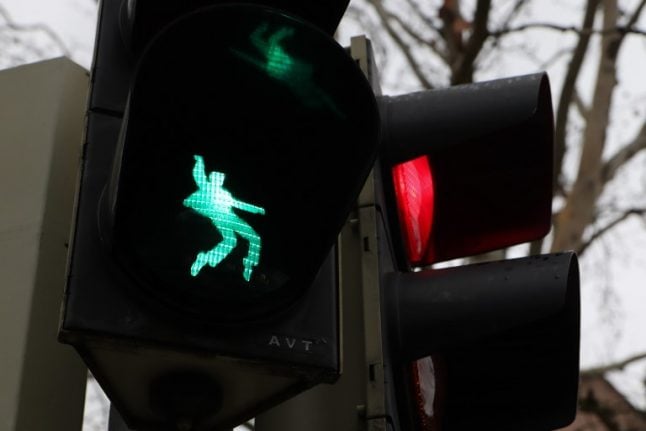 Cross the road, it’s now or never. Or that’s what residents in the German town of Friedberg may start humming when their traffic light jumps to green to reveal a hip-swivelling Elvis Presley.

The jailhouse rocker performed his military service there between 1958 and 1960 and the town remains all shook up about its celebrated visitor.

On red, they show the music icon standing at his microphone.

The town, which calls itself “the army home of Elvis”, already has a giant Elvis statue on a roundabout near the former US barracks.

“Elvis holds a special place here and that’s why he is honoured and appreciated,” local resident Heidi Huebner told AFP after she snapped a picture of the novelty traffic light. Although he served in Friedberg, Elvis actually lived off-base in the neighbouring town of Bad Nauheim, which proudly holds an Elvis festival every year.

It was in Bad Nauheim that Elvis met his future wife Priscilla. The couple wed in the United States in 1967 but divorced six years later.

German towns and cities have a lively tradition in customising traffic lights, often to pay tribute to a famous resident.

The city of Bonn has installed some that light up with Beethoven’s face, while the western town of Trier celebrated the 200th anniversary of Karl Marx’s birth with traffic lights of the bearded philosopher.

A string of German cities have also adorned their traffic lights with same-sex couples to mark gay pride events.

But best-known of all is Berlin’s so-called “Ampelmaennchen” (traffic light man), a cartoonish, hat-wearing fellow that is a much-loved cultural relic from the former East Germany. A memorial for Elvis Presley in Bad Nauheim, western Germany.