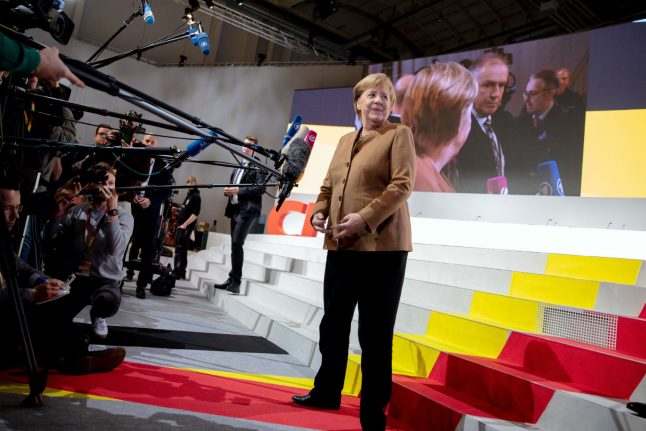 Merkel among members of the media upon arriving at the CDU conference. Photo: DPA

The contest's outcome is expected to be crucial in deciding whether Merkel, Europe's most influential leader, can realize her stated goal of completing her fourth term in 2021 and then leaving politics.

Merkel, 64, is quitting the helm of her conservative Christian Democratic Union (CDU) after a series of poll setbacks rooted in controversy over her liberal refugee policy.

“I'm very grateful that I could be party chairwoman for 18 years – it is a very, very long time and the CDU of course had its ups and downs,” Merkel said as she arrived at the conference venue in Hamburg.

“But we won four national elections together… and I am happy I can remain chancellor.”

Merkel has led Germany since 2005, and moved the party and country steadily toward the political centre. More generous family leave, an exit from nuclear power and an end to military conscription were among her signature policies.

The two main candidates, CDU deputy leader Annegret Kramp-Karrenbauer (known as AKK) and corporate lawyer Friedrich Merz, are locked in a battle over whether to embrace or break with the veteran chancellor's legacy.

A third contender, Health Minister Jens Spahn, 38, an outspoken critic of Merkel's 2015 decision to welcome more than one million asylum seekers to Germany, is seen as being in a distant third place.

SEE ALSO: What you need to know about Merkel's possible successors

While AKK, 56, is viewed as a keeper of the flame and similar to Merkel with an even temper and middle-of-the-road policies, Merz, 63, has become the torchbearer for those seeking a more decisive break with the chancellor.

“The Merkel era is palpably coming to an end,” political journalist and AKK biographer Kristina Dunz said. “Merz could be tempted to see his revenge and lunge for power (as soon as next year).”

This week Merz, who has insisted in the face of widespread scepticism that he could work well with Merkel, won the backing of powerful former finance minister Wolfgang Schäuble, now the parliamentary speaker.

Both men are seen as harbouring longstanding grudges against the chancellor, after she thwarted Schäuble's ambition to become German president and Merz's desire to remain CDU parliamentary group leader several years ago.

“Schäuble's manoeuvre shows: the CDU of the old Germany is trying to make a comeback,” news weekly Der Spiegel said.

“It is the CDU of the (former chancellor Helmut) Kohl years, in which men like Schäuble and Merz barked orders like military officers and women usually made the coffee.”

National broadsheet Süddeutsche Zeitung said Schäuble's move signalled that the CDU's long-festering divisions, thinly veiled by unity behind Merkel, could well break out in the open after the conference.

“The CDU of the Merkel years is falling apart,” it said. “Opposing camps are forming.”

Few observers have dared to predict how the 1,000 delegates – political and party office holders – will vote.

AKK is believed to have Merkel's strong backing but much will depend on how deep and widespread the longing is for a stronger conservative profile.

Economy Minister Peter Altmaier, a close Merkel ally, criticized Schäuble's vocal support for Merz as divisive and threw his weight behind AKK as a centrist force who can keep voters from drifting to the extremes.

“Since Wolfgang Schäuble has now opened the floodgates, I can say that I am convinced that Annegret Kramp-Karrenbauer has the best chance to unite the CDU and win elections,” Altmaier told regional newspaper Rheinische Post.

Whoever wins will face towering challenges for the party, which is currently drawing around 28 percent at the polls, far below the around 40 percent enjoyed during Merkel's heyday.

It has lost support to the right, in the form of the upstart anti-immigration Alternative for Germany party, and the resurgent Greens.

SEE ALSO: Green Party has the highest number of members in its history

Regardless of which course the CDU charts, it is ironically the SPD that could decide Merkel's fate.

The party has long languished in Merkel's shadow and could well decide to jump ship before 2021 to seek to avert further vote debacles.