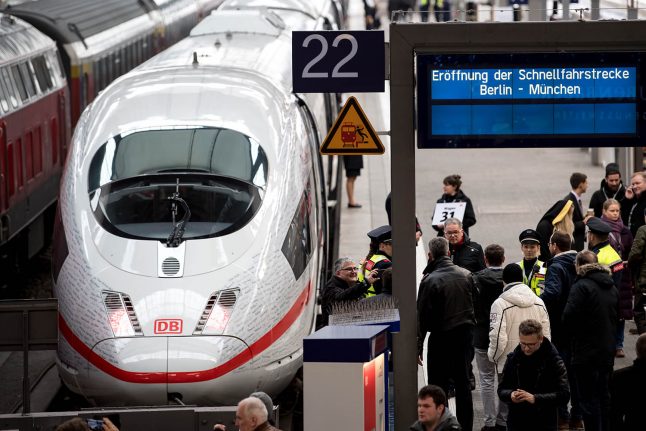 Train fares in Germany are already among the most expensive in Europe. This weekend, they’re set to increase. Deutsche Bahn say the price hikes are necessary to improve train service and add a range of new routes – but advocacy groups aren’t so certain.

Deutsche Bahn told travellers wanting to avoid the price hikes that they needed to book by Saturday, December 8th to pay the older prices.

Buying a ticket onboard would increase significantly from €12.50 to €19, while seat reservations will remain the same. Holders of Bahncards 25 and 50 would see no increases, while BahnCard 100 holders could expect to add an average of 2.9 percent.

As reported by The Local back in October, the price increases are set to offset a number of improvements – including new routes. Two more high-speed Berlin to Munich ICE trips will be added, as well as connections between Berlin and Vienna, Düsseldorf and Stuttgart and Berlin and Münster, among others.

SEE ALSO: Beloved overnight trains to come back to Germany

The Hanover-Würzburg line will be reconstructed, while international connections such as Berlin-Wroclaw-Krakow and Frankfurt-Cologne-Aachen-Brussels will be added.

Deutsche Bahn said the cost increase would lead to shorter travel times and more seats on a number of national and regional routes.

Travellers advocacy group Bahn für alle (Rail For All) has criticized the announcement, suggesting that if the company’s already high prices were unable to improve train services, then further increases were unlikely to make any difference.

Spokesman Bernhard Knierim said “Apart from the special offers, the prices are generally too high, but especially in view of the many delays and train cancellations which Deutsche Bahn seem unable to avoid.”