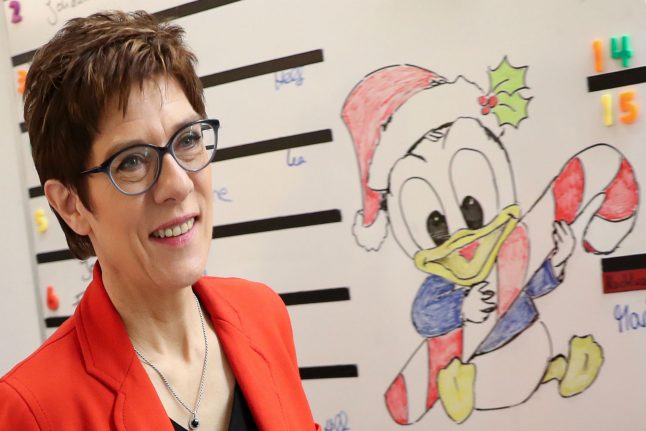 AKK smiles during her visit to the Altona Children's Hospital in Hamburg, which she visited before the start of the CDU party conference on Friday. Photo: DPA

But the newly elected leader of the centre-right Christian Democratic Union (CDU) party, replacing Merkel after 18 years, is the first to say she is no carbon copy of her famous predecessor.

Widely seen as the chancellor's chosen heir, AKK has promised to stick closely to Merkel's centrist course, insisting that the weakened CDU needs to position itself as “the people's party in the middle”.

Yet the devout Catholic and mum-of-three is more conservative on social issues like gay marriage, and has vowed a tougher line on migration as the party seeks to woo back voters lost to the far-right.

“I have my own mind and that has led to conflict with Angela Merkel,” the  56-year-old recently told the Frankfurter Allgemeine daily.

“But I'm not about to artificially distance myself from her,” she added with trademark loyalty.

The protegee's win will come as a relief to Merkel, whose chances of staying on as chancellor until 2021 partly hinge on how well she gets on with the new CDU chair.

Born in Saarland, a tiny, hill-strewn state tucked against the French border, AKK grew up in a large, Catholic family as a self-described nerd who adored reading and never dared to cut class.

She married Helmut Karrenbauer in 1984, the same year she started her studies in law and political science.

The couple have three children and AKK has paid tribute to her husband for
being a stay-at-home father so she could climb the career ladder.

She shot to nationwide attention when she scored a thumping re-election in 2017, a rare bright spot in a slew of regional poll disappointments for the CDU.

It was Merkel herself who handed the short-haired, bespectacled politician a bouquet of flowers after the win.

AKK then played a key role in the tortuous coalition talks that followed an  inconclusive general election, winning plaudits for her determination and  pragmatism in the marathon meetings.

In February Merkel rewarded AKK by tapping her to become the party's number two as general secretary, luring her from Saarland to Berlin.

As CDU leader now AKK is in pole position to be the party's next candidate  for chancellor – a job she admits she has her sights on.

Batting away criticism that she stands for more of the same at a time when the CDU needs to be reinvigorated, AKK has said she sees no need “toundo” Merkel's legacy.

But she has made moves to carve out her own profile.

While praising Merkel's divisive 2015 decision to allow in hundreds of  thousands of asylum seekers, AKK says stronger action is needed to allay German fears about security and integration.

Convicted asylum seekers should be expelled not just from Germany but Europe's entire Schengen zone, AKK has argued.

And she has floated the idea of re-introducing military service or a year of national service to boost social cohesion.

Perhaps most controversially, she opposed gay marriage which was legalized in 2017 and supported by Merkel.

A keen participant in her region's annual carnival celebrations, AKK has over the years endeared herself with the public by dressing up as “cleaning
lady Gretel”.

She reprised the role last year, taking to the stage complete with a smock
and broom to poke fun at the political bigwigs in Berlin – about as un-Merkel as its gets.

Despite these differences, to most Germans AKK stands for continuity in a country readying for the post-Merkel era.

“There's a desire for more inclusion and self-confidence in the party,” she has said. “But I don't sense a desire to completely break with the current course.”