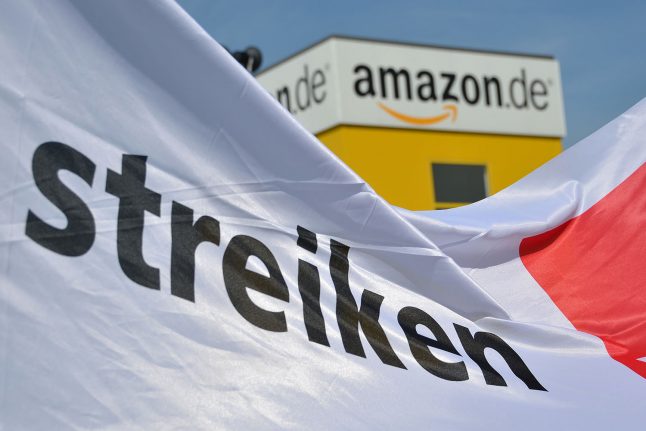 Amazon, the world’s largest delivery company, has a considerable presence in Germany. The American multi-national has 11 locations across the country, employing 13,000 permanent staff.

The union representing Amazon workers has indicated dissatisfaction with worker conditions in Germany, particularly their rights to organize.

The timing of the strikes at the busiest time of the year is no coincidence. The union has announced some form of strike in December each year since 2013.

A strike in the Leipzig logistics centre is set to take place this weekend, starting at midnight on Friday. Company spokesman Günter Isemeyer told The Local that the exact locations of the strikes would be determined in a decentralised fashion.

“It will be decided at the specific [logistics centre] when strikes will take place and under what circumstances”, Isemeyer said.

“There will be some form of action [at all centres] across Germany”.

Isemeyer said that Verdi wouldn't be announcing the strike times and locations centrally, as this would enable Amazon to move staff and redirect packages, minimising the impact of the strike.

“[If they know where the strikes will be] you could imagine that the company will redirect their parcels to keep the centres empty and replace the workers. So that they don't do that, we've not announced it centrally”.

The union has called for Amazon to change their rules to allow for employees to enter into legally binding collective agreements. Verdi has called for an agreement similar to that available for retail workers and other mail order companies.

Amazon countered this, saying their workers already earn a higher wage than the industry average. “Workers in our logistics centres are paid at the high end for workers in their category. Our German employees start with a salary of at least €10.78 per hour,” Amazon spokesman Stefan Eichenseher said.

The company had also put in place a system of bonuses across the Christmas period, with daily and weekly bonuses paid as well as “an annual special payment of €400”. Eichenseher’s message to Amazon employees working over the Christmas period? “It’s worth it,” he said.

Verdi hit back, saying that by taking away rights to organize, it was effectively leaving workers’ conditions up to the discretion of Amazon. “Employees need security,” Verdi representative Isemeyer said.

Isemeyer credited the union’s actions for already improving employee conditions, such as increasing wages and providing for Christmas bonuses.

Verdi has sought to build international links with Amazon employees in Poland, Spain, Italy and the United Kingdom to improve worker outcomes in the international delivery company.

Amazon assured customers that deliveries would be made in time – even if they needed to be processed abroad. “The parcels will arrive punctually for our customers. Anyone ordering up until Friday before Christmas Eve will definitely receive their delivery,” Eichenseher said.

He said that deliveries could be processed abroad, while also reminding those concerned that not all Amazon logistics centres in Germany would be affected by the strike.

Eichenseher encouraged customers to check the arrival date online when the parcel has been sent, telling them the company would ensure the package would arrive on time.