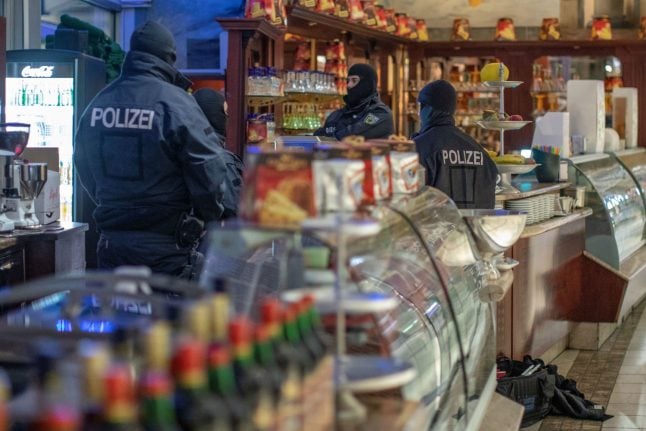 The international sweep involved police in Germany, Italy, the Netherlands and Belgium working together against the powerful organized crime syndicate based in southern Italy.

The group was involved in “cocaine trafficking, money laundering, bribery and violence”, the European judicial agency Eurojust said in a statement.

It said the operation codenamed “Pollino” followed an investigation that began in 2016. The German focus of the action was mainly in the Rhineland and Ruhr area as well as Bavaria. Arrests were made on alleged 'Ndrangheta members, while numerous apartments and restaurants were searched, according to the Federal Criminal Police Office in Wiesbaden, reported DPA.

Italian police said 90 people had been arrested so far in countries across Europe and South American.

Germany's counter-terrorism unit GSG9 was also involved in the operation, which focused on restaurants, offices and apartments linked to the mafia group.

In Pulheim near Cologne, an Italian restaurant and pizzeria was searched by police in the early hours, reported regional newspaper RP Online.
The 45-year-old owner is accused of being a member of a criminal organization, and he is said to have been involved in “cocaine trafficking on a very, very large scale,” reported dpa.
Police also searched an Italian ice cream parlour in Duisburg's city centre. Police raided an Italian ice cream parlour in Duisburg on Wednesday. Photo: DPA
About 240 specialist officers and 200 members of the federal police have been involved in the German operation.
'Decisive hit'

The European police agency Europol said it was a “decisive hit against one of the most powerful Italian criminal networks in the world.”

Mafia has strong foothold in Germany
Investigators in Italy have long warned that the 'Ndrangheta has a strong foothold in Germany.
This summer, the national anti-mafia authority revealed that the Calabrian mafia had established similar structures in Germany as in its home country. Germany, including the port of Hamburg, is of “special interest” to the clans for drug trafficking.
Although Italian investigators repeatedly succeed in beating the clans, the 'Ndrangheta continues to extend its tentacles. In contrast to what is portrayed in films, the mafia conducts less bloody street fights: Instead they usually act in secret and infiltrate state and economic institutions.

Unlike in Italy, there are no strict anti-mafia laws in Germany. Even membership of a mafia organization is a criminal offence there – although this is not the case in Germany.

Traditionally, the mafia in Germany is strongly represented in North Rhine-Westphalia (NRW), among other places, although it does not play a prominent role among organized criminals. The Italian restaurant searched by police on Wednesday morning in Pulheim. Photo: dpa
In 214 cases involving organized crime, which were dealt with by the state police authorities between 2012 and 2016, there were only 10 predominantly Italian suspects, according to previous statements by the interior ministry.
The 'Ndrangheta, seen as the most powerful Italian mafia organization, was also involved in the notorious 2007 Duisburg shootings, where six people were killed. The killings are linked to a long-running feud between the two families: Nirta-Strangio and Pelle-Vottari.

'Operates on all continents'

The 'Ndrangheta – which derives its meaning from the Greek word for “heroism” – is made up of numerous village and family-based clans in Calabria, the rural, mountainous and under-developed “toe” of Italy's boot.

Despite intense police attention and frequent arrests, the organisation has continued to extend its reach.

It has surpassed Sicily's Cosa Nostra and the Naples-based Camorra in influence thanks to its control of the cocaine trade, and is the sole mafia organisation to operate on all continents, according to anti-mafia prosecutors.

The Europe-wide operation came a day after Italian police arrested new Cosa Nostra boss Settimino Mineo and dozens of other suspects in Sicily in a major swoop.

Jeweller Mineo, 80, was detained along with at least 45 others just before he was due to be appointed official heir to notorious mafia boss Toto Riina who died in prison last year.

It said 47 suspects had been targeted and 65 premises were being searched, adding that searches were also underway in Spain.

Dutch NOS television said the 'Ndrangheta were mainly active in the Netherlands in drug smuggling through the country's huge flower export market. Belgian media said the arrests in that country were concentrated in the Limburg area.