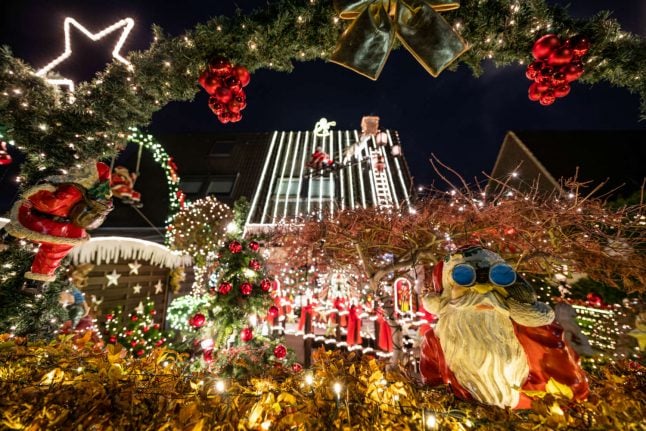 Light decorations belong to Advent in Germany like candles and cookies. In some places, the lights are especially bright: Christmas fans lie kilometres of light-chains in their front gardens, light up thousands of lamps, and some even haul illuminated reindeer on the roof.

With mulled wine and cake, they sometimes attract visitors who stand in front of the ostentation, either marvelling or shaking their heads. In the best instances, visitors leave donations for electricity costs or for good causes. Here are some examples of renowned Christmas houses throughout the country.

A few weeks before Advent has even begun, Harald and Gabriele Muschner from Berkenbrück in Brandenburg find themselves in Christmas stress. Their 800 square metre front garden and the front of their house are decked out with some 15,000 lights. “The right combination of light-chains and light figures creates the magic,” 51-year-old Harald says. For 15 years, the Muschners have adorned their house with flashing, glittering Christmas decorations. They’re arranged differently each year. And every year there is something new. Their colourful Christmas wonderland has made the Muschners somewhat of an attraction. During the weekends of Advent, long traffic queues roll by the property, much to the irritation of their neighbours.

Since the birth of their son, the Erdle family has become infected with the Christmas virus. “Initially we just decorated the flat for our first Christmas time together. And then it increased throughout the years and has exploded,” Angelika Erdle says about her hobby. The Erdle's stand in their glowing garden decked out in decorations. Photo: DPA

At least 50,000 lights, around 40 inflatable figures, some 200 solid plastic figures, and a reindeer herd with 15 animals: the Erdle’s garden in Veitshöchheim in Würzburg has been like this for 26 years. Homemade biscuits and mulled wine are provided every evening for guests in the garden – for six weeks and for free.

In Mainbernheim – also near Würzburg – Rosa Krämer has been decking out her house for more than ten years. The garden, roof and walls are all decorated. Donations for mulled wine and Lebkuchen go towards the care for seriously ill children in the university clinic in Würzburg.

For 12 years, Mario Leicht from Walschleben in Thuringia has been decorating his family home at Christmas time. This year, there will be around 130,000 lights and six kilometres of light-chains and tubes. He has been occupied with the set-up since the middle of October. “For up to four hours a day,” says Leicht. He estimates the material costs up to now to be around €7,500. The electricity bill doesn’t really matter to him this year. “I now have solar energy and am self-sufficient.”

Punctually, on the first day of Advent, the Christmas lights in Martina and Sven Borchart’s home in Delmenthorst go on. This year there are around 55,000 of them, which are powered with four separate 16-amp mains.

“We started in 2002 with five chains of light,” the couple remembers. “Then it became a kind of dynamic.” On the garage roof is a large, home-made manger, and on the roof of the house is a lit-up angel with a wind instrument. This year, for the first time, there is moving decoration: a Christmas pyramid, roughly 2.75 metres tall. On some days, a donation tin collects money which the Borcharts give towards supporting therapeutic rides for disabled children in Delmenhorst.

In Wilhem Balke’s garden in the small village of Hellendorf in Wedemark, near Hanover, lit-up reindeer drag a Christmas; the house itself is illuminated in a bright glow. “The children always ask when it’s going to be lit up,” says Balke. The light chains use around 3,000 kilowatts of electricity – almost as much as two houses do in a year. That costs him a good €600, “despite LEDs”.

Shortly before the start of Advent the house Rüdiger Browatzke’s house and garden in the small town of Groβröhrsdorf near Bautzen transforms into a magical fairy-tale world. “Every year another fairy-tale is added,” Browatzke reports. “This year I’ve looked into the theme of Cinderella.” He built the pumpkin carriage, which is driven by several mice, himself, while his wife painted the figures. At the turn of millennium, Browatzke was in the USA and was inspired by the Christmas-decorated houses. “I wanted it, but not so totally coloured and flickering, and ultimately it shouldn’t disrupt the neighbours,” says the 62-year-old. In front of the house adorned with light-chains, reindeer snowmen and Father Christmases also brighten the house.