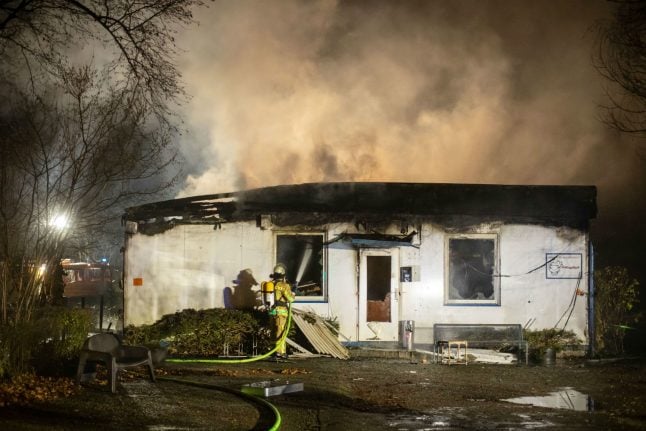 Firefighters working to put out the fire. Photo: DPA

Police were alerted of the fire at 10:30 p.m. on Sunday evening, and worked to extinguish it until Monday morning.

But by then the container building on Düsseldorfer Strasse had completely collapsed, said a police spokesperson. Nobody was injured in the incident. Only rubble was left on Monday morning following the fire. Photo: DPA

On the arrival of the fire brigade, the one-storey building, measuring about eight by ten metres, had flames breaking out of the windows, narrowly avoiding the neighbouring building, reported the local Westdeutsche Allgemeine Zeitung. Part of the roof collapsed in the evening.

The cause of the fire is still unclear, and police are currently conducting a criminal investigation. The damage has also not yet been estimated.

The Duisburger Tafel, a German word for food bank, distributes about 15 tons of food per week to about 4,000 people throughout the city of Duisburg. A sign beckons visitors to lunch, which was provided every day of the year. Photo: DPA

The branch which burned down was one of the three locations throughout the city. Situated in the Grunewald district of the city since 2001, it provided not only up to 80 warm meals for homeless people daily, but also clothes and even services such as haircuts, according to the Tafel's website.