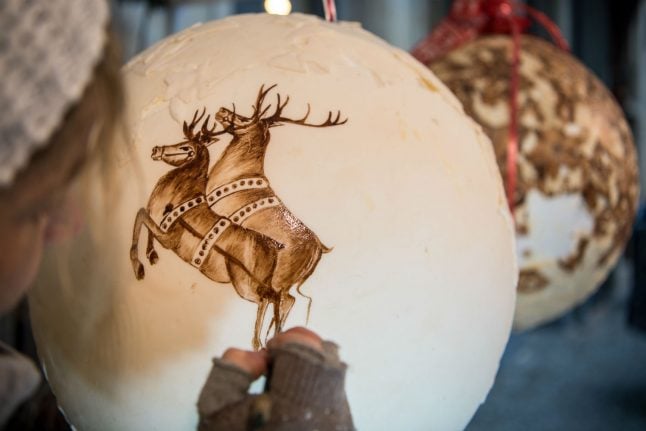 The huge stollen is cut up into pieces and handed out at last year's Stollenfest. Photo: DPA

The people of Dresden take things pretty seriously when it comes to Stollen – a traditional German fruit bread coated in sugar eaten at Christmas. For 23 years, they have celebrated Stollenfest on the Saturday of the second weekend of Advent.

Bakers and Stollen-aficionados parade a specially made giant Stollen through the streets of the Old Town and every year, a Dresden Stollen Madchen (Stollen girl) is elected to accompany the Stollen on its procession.

Today, the giant cake is still cut up into thousands of pieces, using a special 1.6 metre knife weighing in at 12 kilograms, and is then sold at the Christmas market.

The Tübingen chocolate festival from above. Photo: DPA

The chocolate festival in the Tübingen Altstadt has a huge programme covering almost a week. Across the six days, you can sample chocolates from all around the world and sip on some of the hot chocolate around. There are also courses and demonstrations for those who want to learn more about the art of chocolate-making.

The festival brings together over 100 of the top international chocolatiers from all corners of the world and also places a lot of emphasis on the chocolate-making process, promoting fair treatment of the 14 million people whose livelihoods depend on chocolate production.

The festival also has plenty of vegan options, and even a special vegan guide for visitors. In the Thuringia town of Lauscha, there is a particularly special Christmas market on the first and second weekends of Advent – the Kugelmarkt. It is the most well known market for glass Christmas tree decorations in Germany.

Lauscha’s town centre is transformed by a huge Christmas market with stalls, workshops and shops. On Hüttenplatz and along the Glasmeile you can watch as glass is turned into tiny pieces of art such as baubles and bells, all ready to decorate your Christmas tree.

The Museum of Glass Arts in Lauscha is near to the market and the perfect place to learn more about Lauscha’s glass-blowing history. The Nutcracker ballet is certain to put you in the festive mood. Photo: DPA

Everyone’s favourite Christmas ballet is being staged in Berlin this December. It is the perfect performance to make you feel the magic of Christmas and escape from the cold, dark winter evenings in Berlin.

Vasily Medvedev and Yuri Burlaka, two Russian choreographers and connoisseurs of the ballet tradition, have created this unique version for Berlin’s Staatsballett which is based on the same scenery and choreography that was used in the Ballet’s 1892 world premiere.

There is an introduction in German 45 minutes before each performance, including interviews and special guests so you can hear more about the history of the Ballet and behind the scenes of this new production. The beautiful Christmas market in the old market square of Goslar. Photo: DPA

In December Germany’s Christmas markets will all be underway. Almost every town and city will set up stalls selling handicrafts, snacks, and (most importantly) Glühwein. There is nothing quite like the Gemütlichkeit of a German Christmas market, and we have picked out some of the most beautiful and authentic markets here. New Year’s Eve will be celebrated all across Germany on the night of December 31st.

The biggest New Year’s Eve street party in Europe is held at the Brandenburg Gate in Berlin starting December 31st and continuing until 3am on January 1st.

There are live performances, DJs, and stunning light and music shows, alongside a breathtaking firework show as the New Year rolls in. Between the historic Brandenburg Gate and the Victory Column, over a million people witness this spectacle every year with most continuing the party until the early hours of the morning.

Germany’s other cities also have something to offer though. In Cologne you can see the silhouette of the Cathedral with fireworks behind from the banks of the Rhine and the Rheinpark and in Munich huge crowds gather at the historic Marienplatz, Olympic Park, English Garden, and Old Town Square to toast the New Year amid gorgeous fireworks. Stuttgart, Hamburg, Dresden and Frankfurt also host huge fireworks displays to bring in the New Year. This festival at the Theresienwiese in Munich takes place annually and attempts to connect the cultural offerings of music, theatre, cabaret and art with an ecological consciousness.

The festival is often referred to as the 'alternative Christmas market' in Munich. There are exciting international Nouveau Cirque productions, street theater and wintry gastronomy (which is often organic), alongside arts and crafts from all over the world.

The Circus Oz from Australia returns to the festival this winter and its show 'Model Citizens' combines the beauty and the risk of breathtaking body movements with theatricality, choreography and unmistakable Australian humour.

The festival has a huge programme of performances and live music, as well as the ‘World Salon’ which hosts talks and panel discussions and the ‘Market of Ideas’ which is full of sustainable, organic and fair trade goods.

Christmas Gardens in Berlin, Stuttgart and Dresden, until January 6th

The Christmas Garden at the Pillnitz Palace in Dresden. Photo: DPA

The Botanic Gardens in Berlin have been lit up every Christmas for a few years, but this year the Wilhelma in Stuttgart and the Pillnitz Palace and Park in Dresden will also get a touch of festivity.