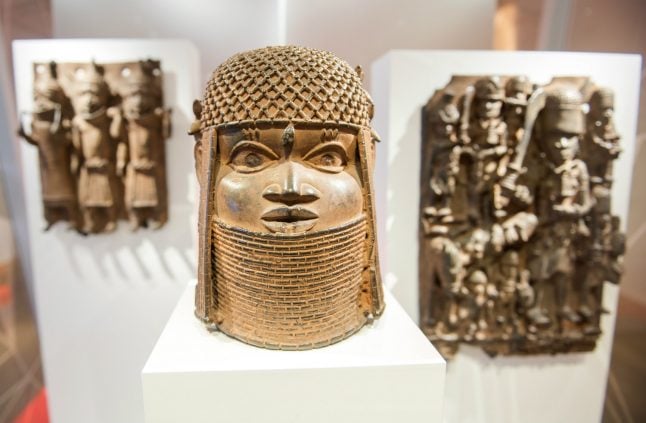 Three bronzes from Benin, West Africa, on display at the MGK Museum in Hamburg during an exhibition. Photo: DPA

A UNESCO convention against the export of illicit cultural goods adopted in 1970 called for the return of cultural property taken from a country but it did not address historic cases, including from the colonial era.

With museums fearing they could be forced to return artefacts, former colonial powers have been slow to ratify the convention: France only did so 1997, Britain in 2002, Germany in 2007 and Belgium in 2009.

As experts advise France to return thousands of African artworks held in its museums, here is an overview of plans and disputes over artefacts in Europe looted from former African colonies.

Germany is considering what to do with the items stolen from its colonial-era African empire, which ran from 1884 to the end of the First World War. It included countries such as Cameroon and Namibia.

In September 2017, Culture Minister Monika Grütters suggested a model similar to that used by the German Centre for Lost Cultural Property. The centre seeks out owners of art plundered by Nazis in order to return the items.

Grütters has also said that colonial heritage has for too long been a “blind spot” in Germany and has pledged additional funding for provenance research.

The debate is likely to ignite again in 2019 when a major new ethnological museum, the Humboldt Forum, opens its doors. Its collection includes artefacts taken from former German colonies.

SEE ALSO: Rebuild of Kaiser's Palace in central Berlin on schedule to open next year

The institution director Hartmut Dorgerloh has said that the roots of objects is a “very important subject for the Humboldt Forum”.

“If we are going to present these objects, we must also tell the story of their provenance,” he told the Art Newspaper. “We are working with the communities of origin, with international experts and with a critical public to consciously address this subject.”

A planned exhibition that includes materials from the the West African country Benin will include descriptions of their origins and link them to the current debates, for example.

Other museums in Germany have also tried to tackle the issue. At the Museum for Kunst und Gewerbe or MKG (arts and crafts) in Hamburg, an exhibition featuring art from other countries discussed Germany's colonial past.

But many still argue that European countries should be doing more to return the art to the country it was stolen from.

In 2016 Benin demanded the repatriation of a part of its treasures from the Kingdom of Dahomey.

They include totems, sceptres and sacred doors from the Royal Palaces of Aboma, which French troops took between 1892 and 1894 and are exhibited in the Quai Branly museum in Paris.

While that request was initially denied, it has since found a more sympathetic hearing from French President Emmanuel Macron.

In November 2016 Macron promised to “return African heritage to Africa” in a speech in Burkina Faso. He tasked French art historian Benedicte Savoy and Senegalese writer Felwine Sarr to draw up the conditions.

Their report, to be presented to Macron on Friday and of which AFP has seen a copy, proposes modifying France's heritage law to allow the restitution of cultural works if bilateral accords are struck between France and African
states. The British Museum holds a major collection of bronzes from the African Kingdom of Benin that were seized by the British army in 1897.

Nigeria, which today covers the ancient territory, wants them returned. The museum says it is ready to send them back but only on loan.

London's Victoria and Albert Museum has also said it is open to the long-term loan to Ethiopia of jewellery and manuscripts looted by British soldiers in 1868 when they stormed the Fortress of Magdala during the reign of
Emperor Tewodros II.

Ethiopia is demanding the return some of the most significant “treasures of Magdala”, including a royal crown.

Leader of the opposition Labour Party, Jeremy Corbyn, has promised to return stolen art to its countries of origin should he become prime minister.

Belgium's debates over its colonial past have coalesced around the vast transformation of the Royal Museum for Central Africa in Tervuren, near Brussels. It was built in the 19th century under King Leopold II to showcase
Belgium's presence in the Congo, Rwanda and Burundi.

The renovated museum will reopen in December after five years and promises to offer a “critical view” on colonialism.

But in September a collective of associations, universities and Congolese personalities published an open letter demanding the restitution of its works of art.

“We can not base intercultural dialogue on former pillaging by colonial murderers: stolen cultural goods must be repatriated,” they said. 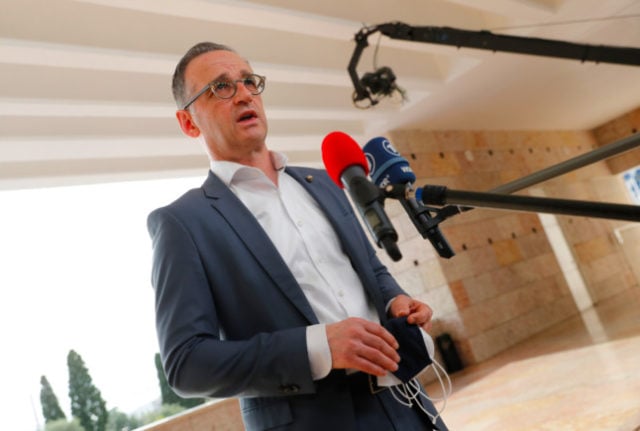