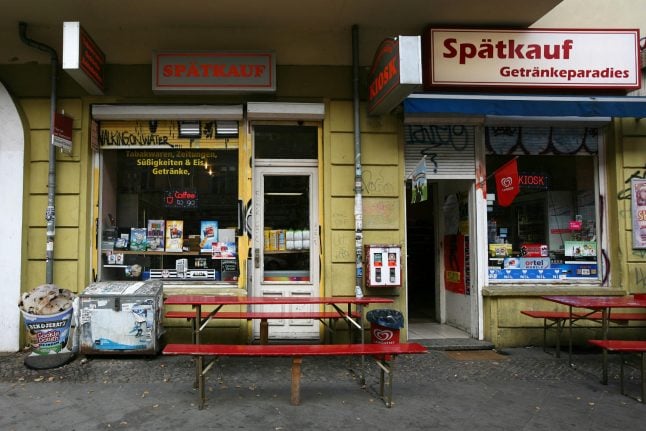 Like any convenience store, the “World-connection weser” in Berlin stocks shelves with snacks, booze and magazines. Yet reflecting its uber-trendy Neukölln customers, the shop also carries vegan ice-cream, and features a wooden bench outside where customers perch for a smoke or chat, even as the wintry temperatures begin to dip.

“I wanted to do something fun”, Firat Yildiz told The Local when asked why he chose to open up the Späti 12 years ago. “We get on very well with our customers, so we’re all like a family. They’re really good to us.”

The spätis (short for spätkauf, or late-shop) don’t only offer the afterhours and Sundays that other Berlin supermarkets usually don’t, but also fulfil a fun and lively niche, which each späti offering its own quirky character – Pamuk Shop in Moabit, which stocks everything from novelty pencil holders to hookah pipes, to the “Käptn Späti, which drifts on a boat on Berlin’s Spree, or main river.

“My customers love it,” Tobias Laukemper, owner of the Käptn Späti, told The Local.  “They are very surprised when I approach them from the water side.. they laugh and smile at me.”

To most Berliners, Spätis are so commonplace that once you’ve lived here a while, you stop noticing they’re even there. This, however, is what makes them so important. With one on nearly every street, spätis represent Berlin’s spirit arguably more than any statues, museums or churches. And today, they’re at risk of disappearing due to stricter regulations about opening hours and quickly rising rents.

It may seem excessive to gush over what are, in effect, small local shops. But many others share my enthusiasm. There have been odes and cultural guides written about spatis, large campaigns fought over them, and, as of this year, urban art exhibited inside them.

Their history goes way back too, appearing first in 1859 as “Kiosks” in Berlin around the same time that bottled mineral water became available to the public. At that time, tap water was unsafe to drink, and as the populace turned to liquor and beer to replace it, levels of alcoholism grew.

Somewhat ironically, the antecedent of the Späti was thus introduced to combat excessive consumption of alcohol by selling safe-to-drink mineral water. Later down the line, the GDR introduced the term “Späti” as the shops began to stock other essential items to serve the needs of shift workers who couldn’t buy groceries during standard supermarket hours.

Today, aside from the vast array of stock, Spätis serve much the same purpose, acting as a lifeline to those (like many newcomers) who tend to forget about Germany’s strict no-shops-open-on-Sunday policy and find their cupboards empty when the weekend rolls around.

Is gentrification putting spätis at risk?

Yet while large numbers of spätis do remain open on Sunday, the legality of this practice is dubious, with some businesses in recent years receiving fines of up to €2500 for doing so. It’s a move from local officials that has caused anger among business owners and the public, with a petition launched in 2016 that called on the German Ordungsamst (regulatory agency) to reconsider their stance on the issue.

The endeavour was partially successful, but Spätis opening on Sundays – usually their busiest day – still risk hefty fines and the threat of closure.

So why all the big fuss? You could, after all, hardly imagine people in the U.S running around wearing “I ❤ 7/11” t-shirts equivalent to the “I ❤ PAMUK SHOP” shirts sold at the Moabit Späti, or Brits fighting tooth and nail for a local Spar. The essential difference has much to do with the fact that Spätis tend to be independent businesses, a model that Berliners largely prefer over chain supermarkets.

More often than not, the shops are owned and managed by first, second or third-generation immigrants, and thus provide a livelihood for families across the city. When you shop at a Späti, in other words, you know exactly who your money is going to.

Aside from this, Berliners care about Spätis because they are an integral part of Kiez (neighbourhood) culture. And it’s about more than just the money. In 2001, then-mayor Klaus Wowereit famously declared Berlin “arm, aber sexy” (poor but sexy), a quote that in recent years has been dragged up frequently to complain about the rapid gentrification of the city.

And while your local bar might have been taken over by hipster, craft beer enthusiasts, thanks to Berlin’s Spätis, it’s still possible to enjoy a beer for under a euro. Simply put, in a city that’s been beleaguered by new luxury builds and spiralling rental costs, Spätis are keeping the cheap, carnivalesque spirit of Berlin alive.

“Drink Drunk” by Schlesisches Tor, for instance, is one of a number of Spätis that host free parties until 6am for their customers, sometimes even bringing in a DJ. This year, Späti-lovers enjoyed a “Spätival” around Friedrichhain and Kreuzberg, and not long afterwards, I watched England’s World Cup chances die on a makeshift screen outside Neukolln’s “Späti international”, packed out with people spilling onto the street. They’re meeting places, cheap bars, post offices and emergency stops, and as integral to Berlin’s culture as the currywurst or the döner.

A push to save the Späti

Yet it’s not just Sunday hours that threaten these cherished businesses. Spätis are not immune to the forces of gentrification happening around them, and recent years have seen a number of owners turfed out or threatened with eviction.

Felix Lange, a member of the activist group “Bizim Kiez”, told The Local the problem lies in the fact that “small stores in most cases do not have the  financial resources to sustain the enormous rent increases they are threatened with,” he said. “German legislation offers little regulation on rents for business tenants.”

The group was founded after the closure of the neighbourhood supermarket Bizim Bakkal in 2015, but since then many more small businesses and Spätis have closed or are under threat, including the Oranienspäti on the quickly-gentrifying Oranienstrasse in Kreuzberg, which Lange says “still faces eviction…the situation remains dire… these small stores in most cases do not have the  financial resources to sustain the enormous rent increases they are threatened with.”

The Späti was among the businesses which the group illuminated with lanterns on Saturday evening, November 17th, to bring attention to the development sweeping through the neighbourhood.

The very existence of groups like Bizim Kiez is some comfort, however, and rallies to save the Oranienspäti – and other businesses like it – will continue later this month. It’s clear that Berliners understand the value that spätis add to the fabric and culture of their city; staying up with the revellers and offering all manner of weird and wonderful trinkets – whatever the hour of day, or night, may be. 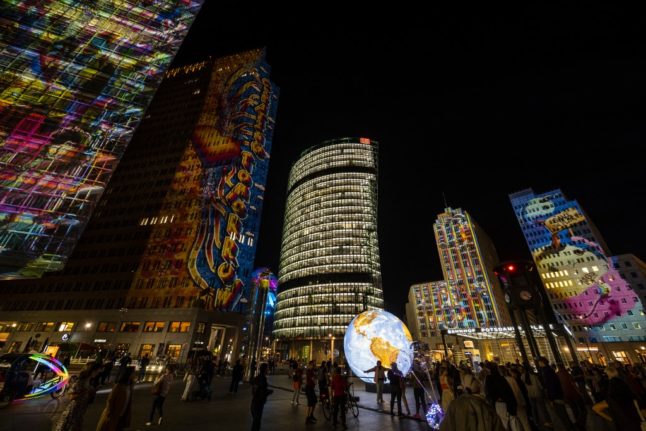 The event, first held in 2005 and running until October 16, draws more than two million spectators to the German capital each autumn, according to organisers.

Critics had urged the private consortium behind the festival to call it off this year, saying it set a bad example while the country tries to wean itself off Russian energy with conservation measures.

But organisers said they had managed to cut their expected energy consumption by 75 percent compared to last year, in large part by using LED bulbs and less ambitious designs, and would power the displays entirely from renewable sources.

They also switched off the lights an hour earlier, at 11 pm instead of midnight each night, while only illuminating 35 sites versus around
100 in past years.

Chancellor Olaf Scholz’s centre-left-led government has launched a national drive to save energy amid soaring prices due to the Russian invasion of Ukraine, as the EU steps up measures to reduce power usage across the bloc.

Berlin in August began switching off spotlights illuminating some 200 buildings and historic monuments including its red-brick city hall and State Opera House as part of the country-wide effort.