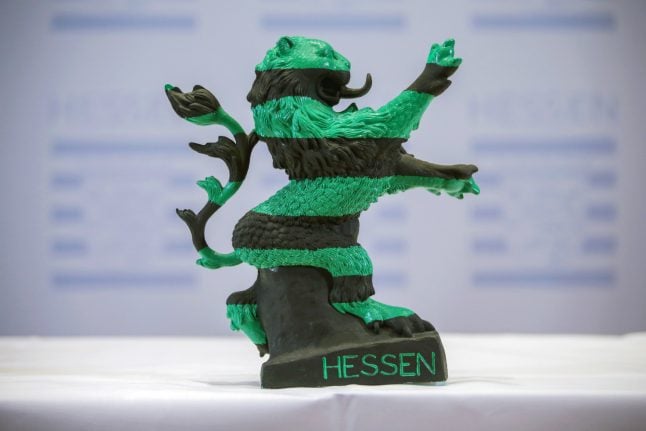 The CDU/Greens (black/green) coalition could continue in Hesse. Photo: DPA

After a vote recount in Hesse – over fears that the results of the recent regional election were wrong – the authorities announced on Friday that there were no significant changes.

The final results show that the conservative CDU is still the strongest party in the central German state after it achieved 27 percent in the state elections on October 28th, despite a drop of 10 percentage points from 2004.

The Greens, meanwhile, experienced a surge in popularity and managed to take second place from the centre left Social Democrats (SPD), but only with a tiny margin of about 90 votes. The final results show that the Greens and SPD are neck and neck after both achieved 19.8 percent of the vote, reported Merkur.de.

The new state parliament has 137 members. The CDU has 40 seats, the Greens and the SPD: 29 seats each. The anti-immigration Alternative for Germany (AfD) will have 19 members, while the pro business Free Democrats (FDP) will have 11 and the Left (die Linke) 9.

Why was there a recount?

It emerged that there had been computer glitches on election night. The system used to count the ballots in the financial capital of Frankfurt was down for two hours on election night, leading to calculation mistakes.

At first the city council election offices had resisted a recount, saying that there was no reason to doubt the results.

However, officials had a change of heart and decided that counting all the ballots again would provide reassurances to citizens and politicians.

On Friday in Hesse capital Wiesbaden, the state election commissioner announced that compared to the provisional figures, there were no significant shifts in the percentages, and the distribution of seats in the state parliament has not changed.

It’s good news for the CDU and Greens. For the past five years, Hesse has been governed by the coalition of them both, and it's a partnership that the parties want to continue.

The CDU had suspended coalition talks with the Greens until the votes were recounted but now discussions can get underway.

The election had massive repercussions nationally. Only a day after, Merkel announced she was to step down as party leader.

Along with the CDU, the SPD also suffered heavy losses in the state elections three weeks ago, while the Greens increased their share of votes significantly, a trend that has taken place in other parts of Germany too, including Bavaria.

SEE ALSO: Q and A: How the race to replace Merkel is breathing life into the CDU