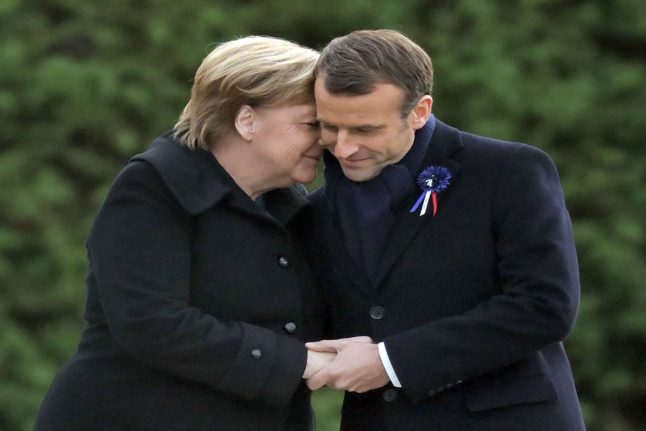 Merkel and Macron greeting each other at a ceremony commemorating the end of World War I. Photo: DPA

Beleaguered at home, belittled abroad, Emmanuel Macron of France and Germany's Angela Merkel will use a Berlin meeting on Sunday to bolster their alliance as champions of a united Europe fraught with resurgent nationalism.

After weeks of stalemate on issues such as eurozone reforms and how to get internet giants to pay more tax, the French president and German chancellor have recently gone out of their way to demonstrate unity and common purpose.

Macron gave Merkel pride of place last weekend during commemorations marking the end of World War I where he spoke out against nationalism – a message he is likely to hammer home again Sunday when addressing Germany's parliament as part of ceremonies to commemorate victims of war.

French presidential aides said Macron will also renew his call for a European army to reduce the EU's military dependence on the United States, despite being taken to task by US President Donald Trump who termed the proposal “very insulting”.

In a series of tweets after returning home from the armistice commemorations in Paris the US president mocked Macron, saying that without US military intervention in World War II the French would today be speaking German.

His tweets, in which he also sneered at Macron's low poll ratings at home, coincided with a speech by Merkel at the European Parliament, in which she too called for a European army.

Macron and Merkel are displaying “the will to speak with one voice”, said Helene Miard-Delacroix, a Germany expert at the Paris-Sorbonne University.

“They share a common interest in bolstering one another. Alone President Macron cannot rally the Europeans, and neither can the politically-weakened chancellor act alone”, she said.

Strongly backing Macron on an issue such as closer European defence integration “is a way for her to say 'I'm still here, I'm in control'”, Miard-Delacroix said.

Once dubbed the world's most powerful woman, Merkel has seen her party hemorrhage votes to the far-right AfD party in recent elections.

Last month, she announced she would step down as chancellor when her current term expires in 2021.

But by also renouncing, as of December, the leadership of her Christian Democratic Union (CDU) she has opened herself up to a possible party coup which could see her deposed as government leader before the hour of her
choosing.

Macron, whose ratings have plummeted in recent months, is also facing increasing criticism at home, notably over taxation, just as he seeks to bolster his European credentials in the run-up to May's European parliamentary elections.

SEE ALSO: 'Madame Merkel'? 'No, I'm the Chancellor of Germany'

The two countries have agreed to set up a new joint parliamentary assembly, consisting of about 50 MPs from each side, which would meet at least twice a
year.

But deeper issues remain unresolved, with Germany notably suspicious of Macron's rushed bid to reform the eurozone, including giving it a common budget.

“There's questioning of Emmanuel Macron in Germany because he wants to go very fast in dealing with European issues when in fact time is needed,” said Hans Stark, an expert at the French Institute of International Relations.

And Merkel is treading a thin line. “She can't back French projects 100 percent, but doesn't want to speak out against them either,” he added.

Merkel “has very clearly shown how closely she shares Macron's views” on Europe, but “it's not just statements that count but how they are implemented,” a French presidential aide said for his part.

Both leaders remain determined however to stand fast in the face of rising nationalism in eastern Europe and the march of populism in countries such as Italy, one of Europe's founding members.