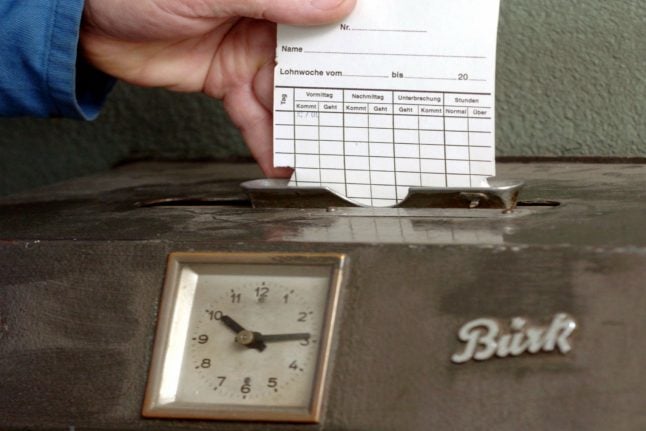 Clocking in and clocking out: is the eight-hour working day here to stay? Photo: DPA

Germany’s Working Hours Act of 1994 stipulates that an employee’s weekday working hours may not exceed eight hours a day. But the eight-hour day has, in fact, a very long history. Here's how it came about.

A hundred years ago, businesses and unions agreed for the first time on a maximum working time in Germany.

On November 15th, 1918, the Stinnes-Legien Agreement was signed. It was named after the industrialist Hugo Stinnes, and the head of the General Commission of German Unions, Carl Legien. The deal came after a long fight and demands by the workforce.

Fears that the November Revolution – civil conflict that resulted in the democratic Weimar Republic forming – could lead to the nationalization of coal mines and steelworks lead businesses to acknowledge the unions as a legitimate representative for workers.

They agreed in principle to the eight-hour-day with no loss of pay. But only if the changes were also to come in to play in other industrialized countries…which never happened.

So the eight-hour day didn't became law in the Weimar Republic. Again and again, debate about the length of the working day was reignited.

After the Second World War, the allies reintroduced the eight-hour day. In the 1950s, as a rule, 48-hour weeks were worked, spread out over 6 days.

But under the motto “on Sundays, daddy belongs to me”, the unions started campaigning for five-day-weeks with 40 hours, which was introduced into more and more industries.

Should the eight-hour day be reformed?

Today, the 40-hour week is once again controversial. “The rigid eight-hour day is a relic of working hour regulations from last century,” according to the Federal Association of German Employers, which adds that these working hours cannot master the challenges of the modern world.

For employers, the rest time of two working days of eleven consecutive hours – which is laid down in law by the Working Hours Act – is a thorn in the side. This regulation is “totally behind the times”, the association says.

Employers and employees must have the opportunity to spread out their working hours across the week. That way it’s “not about more work, but about more mobility.”

Flexible working hours are meant to support a business’ competitive capacity, as well as facilitate the compatibility of family and career. Making working hours more flexible should also be in harmony with the eight-hour working day, asserts Annelie Buntenbach, the board director of the DGB.

This “extremely important boundary” is apparently just on paper for many employees, who have to work significantly longer hours and must often be available in their free time.

Work days that last longer than eight hours are not uncommon, according to data from the Federal Institute for Occupational Safety and Healthcare (Baua).

According to a survey from 2015, around 34 percent of German employees interviewed stated that they were at work for longer than nine hours, including breaks. Occasional transgressions of the eight-hour day are allowed by law, if the average amount of hours worked over a six-month period is no more than eight a day.

So, is the eight-hour day an outmoded model? Not at all, according to job market researcher Professor Gerhard Bosch from the University of Duisburg-Essen.

“The eight-hour day is a bit like a second skin for us all and it is anchored as a rhythm in our society.” It’s become the international standard “which today is still absolutely dominant”, he says. Even flexible hours are organised along eight-hour days.

Making working hours flexible is progress, according to Baua. It signifies “an increasing diversity”, he says.

And things are changing across the working landscape. Earlier this year a deal was struck by Germany's metalworkers’ union which will allow employees to reduce their working hours or take some time out to look after their children or elderly parents.

From January 2019, workers represented by IG Metall can expect not only a 4.3% pay rise, but also the option to reduce their working week to 28 hours for a total of two years – and claim the right to full-time employment afterwards.

On the political agenda

Meanwhile, reform to the Working Hours Act is on the political agenda. According to a coalition agreement, Union and SPD want to create “room to experiment” for businesses through an opening clause.

On the basis of wage agreements, the maximum working hours should be able to become more flexibly regulated in company agreements. Federal Minister for Work, Hubertus Heil (SPD) has, however, assured that “the eight-hour-day must stay in law,” in an interview with “Tagesspiegel” shortly after his inauguration.