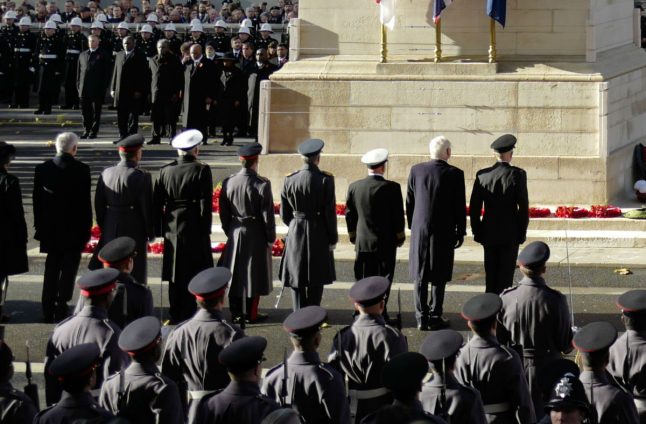 Britain's Prince Charles, Prince of Wales and President of Germany, Frank-Walter Steinmeier both faced the Cenotaph during the Remembrance Sunday ceremony. Photo: Tolga Akmen/AFP
He laid a wreath at the Cenotaph war memorial in central London alongside British Prime Minister Theresa May, who chose not to join other world leaders marking the centenary of the Armistice in Paris.
Across Britain, individuals and communities held two minutes silence at 11am to remember the end of the four-year conflict which claimed 18 million lives.
In London, the moment was marked by the chiming of Big Ben, which has been largely silent since renovation work began in August 2017 but which still sounds for important national events.
Prince Charles laid the first wreath of red poppies, Britain's emblem of remembrance, at the Cenotaph on behalf of his mother Queen Elizabeth II, who watched from a nearby balcony.
Steinmeier followed with his wreath, in a unique and highly symbolic act marking the reconciliation between the once warring nations.
Senior royals, diplomats, military leaders and politicians also paid their respects at the memorial to all British and Commonwealth service personnel who have died in combat since 1914.
They were followed by the traditional march past by military veterans, their medals glinting in the sunshine, as a crowd of thousands looked on.