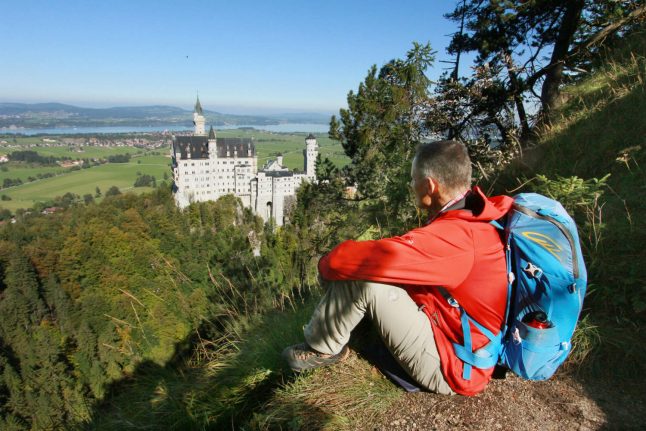 A hiker atop of the Tegelberg, peering down at the famous Neuschwanstein. Photo: DPA

My legs were dangling uselessly in the air. Underneath my feet, around 1,000 metres of empty space separated me from the lush fields of southern Bavaria.

Just 24 hours previously I had taken the rather impulsive decision to go paragliding in the Allgäu, a region of tree-lined mountains and postcard villages on the border with Austria. And now I was strapped into the passenger seat of a paraglider as my pilot hunted down thermal air currents that would lift us up over the Alps.

To say that there was something surreal about the experience doesn’t quite do it justice. Sitting snugly in the glider, I was so at ease I had a hard time convincing myself I was actually hanging in midair and not watching the world’s most high-definition .

Myself and my girlfriend had made the decision to leap off the mountainside the previous day. We’d only come to the Allgäu to climb the Tegelberg, “mad” King Ludwig of Bavaria’s favourite mountain. But near the summit we came across a paragliding school preparing for take off. A quick chat with the instructor later and we were booked in for two tandem flights the following afternoon. A tandem flight departing from the Tegelberg. Photo: DPA

The climb up the mountain had already afforded enough excitement and spectacular scenery to make the journey to Germany’s southern border worth our while. The route we chose, named The Yellow Wall, involved a mixture of hiking and climbing a Klettersteig – a series of ladders and steel ropes that transport you up exposed cliff faces.

Our guide book had informed us that the route was basic enough that it wasn’t necessary to bring climbing harnesses. But as we approached the first steep rock face a visibly shaken couple passed us on their way down. “That was too much,” was all they said. Uh oh, had we bitten off more than we could chew? But after five or ten minutes of climbing we were at ease again. The steel cables offered a good grip and whenever the rock became too steep a cleverly placed steel foot hold helped us on our way.

Tegelberg is by no means Germany’s highest mountain, nor its steepest. But it does have something that no other mountain has – a castle so extravagant it bankrupted the king of Bavaria. King Ludwig decided to build Neuschwanstein castle close to Tegelberg’s base in the mid-19th Century. Every so often on our climb we’d catch sight of this “fairy tale” palace balancing improbably on a fist of limestone rock hundreds of metres below us. It is a sight to behold – and all the more enjoyable for the fact that we weren't fighting through a sea of tourists to take a picture of it.

The spontaneous decision to go paragliding meant that we needed a bed for the night. An impossible task surely in the height of summer at one of Germany’s most iconic tourist sights? Not a bit of it. After knocking on a few doors in the nearby village of Schwangau we struck lucky. For the princely sum of €40 we were offered an enormous room with a view over the castle. As one local told us, most of the tourists who come to see Neuschwanstein are bused in and out on the same day, leaving the people of Schwangau in peace.

The next morning we swam in the Alpsee, a lake just beyond Neuschwanstein castle that has an otherworldly turquoise glow to it. Ludwig certainly had an eye for the dramatic. Once again we were surprised to find we had the lake to ourselves.

And then came the leap off the mountainside. We pulled on our jumpsuits at the mountain base before travelling with the cable car to the top. After a nervous wait and several false starts, my pilot finally gave me the order to run and jump. We skimmed over the top of some bushes and were away.

A few minutes later we found our first thermal current and started corkscrewing higher and higher into the sky, increasing our altitude by 1.5 metres a second. Soon we were 2,000 metres above sea level. Zugspitze, Germany’s highest peak lay to our east, the huge rocky summits of Tirol rose up above the tree line to the south. A jogger pausing at the scenic Alpsee in the fall. Photo: DPA

A word of warning about paragliding though: everyone worries about the takeoff, but the thing that is most likely to get you is motion sickness. According to my pilot, at least one of his passengers vomits in midair every week. As we corkscrewed in tight turns up through the warm thermal air, I could understand why. The serenity I felt at the beginning of the flight was soon replaced by grogginess. The landing in a cow field 20 minutes later didn’t come a moment too soon.

The Allgäu is a delight for lovers of the great outdoors. Besides mountain climbing and paragliding, the region is well known for canyoning and kayaking. And in the winter, the area is a family-friendly skiing destination.

But this scenic location has plenty to offer those who like things a bit quieter too. Several mountains have cable cars, meaning you can skip the hassle of climbing and get straight to the spectacular views. And for those who prefer to keep your feet firmly on the ground, there are several towns in the Allgäu which perfectly capture the heile Welt feel of the German south.

If you want luxury and relaxation, head to the small town of Oberstaufen, known for its grand 19th century hotels and spas. Meanwhile, Wangen im Allgäu, a town close to Lake Constance, is well-known for its baroque town centre.

The region Is also notable for its Bergkäse, a strong hard cheese.

So: castles, mountains, cheese. If you want to step out of the hubbub of a modern Germany city and indulge in a few timeless cliches, the Allgäu is the perfect place to do it.