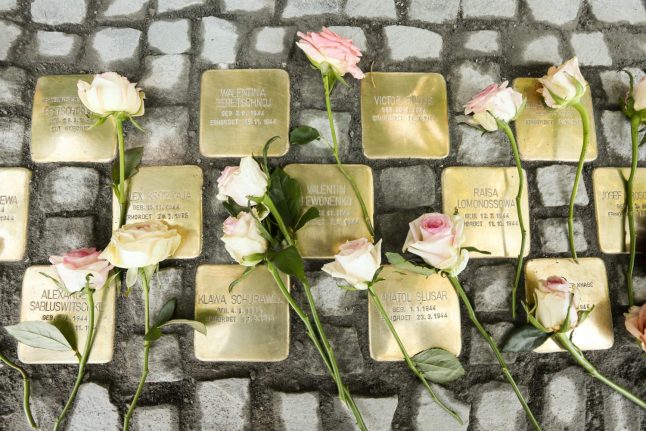 You might not notice them at first. The tiny blocks with gleaming brass surfaces in the pavement are easy to ignore when you’re in a rush. But after you’ve taken a closer look, you begin to come across these traces of lives lived and tragically lost more frequently.

Tens of thousands of Stolpersteine – stumbling blocks or stones – are scattered across Germany and other countries to preserve the memory of Nazi victims.

Each stone is engraved with the name, date of birth and fate of an individual and is laid in front of their last voluntary home.

That’s important, says Sophia Schmitz, a historian and coordinator of the Stolpersteine project in Berlin. “The Stolpersteine, as an act of principle, are always being laid in the last freely chosen place of residence,” says Schmitz. “The project wants to show that people were torn from their lives and made to move.”

Schmitz details the experience of Jewish victims who were forced out of their jobs and, as a result, faced difficult economic situations.

“Most of them had to move,” says Schmitz. “Then from 1938/39 onward, there was a policy of forcing Jewish people to live together.”

This resulted in families being packed into apartments or houses, living in cramped conditions.

“We try to find out at which point of their lives people were torn away,” says Schmitz.

Dedicated to all Nazi victims

The requests to lay the memorial plaques come from different groups, including relatives of victims, people who are interested in previous residents of their home and school groups.

Queries, for the most part, come from Israel, the United States, the UK, South America and Australia, where relatives of people who were persecuted by the Nazis live today.

The project is dedicated to all victims of Nazism, “no matter if they were murdered or not”, says Schmitz, in a room at the top of the German Resistance Memorial Centre in Berlin, which the Stolpersteine project shares office space with. “People who managed to survive by luck, or whatever, or who actually fled into exile, are included as victims too.”

As well as Jews, other victim groups subjected to the Nazi’s reign of terror were political and religious activists in the resistance, gay people, physically and mentally disabled people who were murdered in the so-called ‘euthanasia programme’, Jehovah's Witnesses, Roma and Sinti,  as well as people deemed asocial and unsuitable for society.

Last month, the 70,000th stone was laid as part of the project, which was started by Cologne-based artist Gunter Demnig, 70, in 1996. The stone was engraved with the name of Willy Zimmerer, who had a disability and was murdered in 1944 in Hadamar near Frankfurt.

Frankfurt was home to a psychiatric hospital that was used to kill “undesirable” members of society under the 'euthanasia' programme'. Almost 15,000 Germans were murdered there.

Demnig has travelled across Germany and 24 other countries, including Belgium, France, Austria, Greece, Italy, Poland and even Argentina to lay the memorial plaques.

After requests come in and are checked, it is handed over to local neighbourhood Stolpersteine groups – usually made up of volunteers – who can then coordinate when the laying of the stone can take place. A lot of research has to be done before a stone is laid so that the facts of the person's life can be established.

The project, which is the largest decentralized memorial in the world, is funded by sponsorships and each stone costs €120.

Depending on the area, there can be huge waiting lists but concessions are made if, for example, an elderly relative has a pressing need to see their family member’s stone being laid sooner rather than later.

Demnig lays each stone himself and a small service is usually held. Often relatives play music or read out passages.

Although Schmitz stresses that Stolpersteine are not graves, she says the laying of the stone can be similar to the ritual of burying someone to some people.

She says most Nazi victims who receive a Stolperstein “don’t have a grave” so family members “have no place to commemorate”.

“So in a way you give back to the family a place to which they could also come back,” she says.

“I can really understand the importance of having a place.” Dealing with the past is divisive issue

With anti-Semitic tensions rising across the world and an increase in far-right rhetoric, Schmitz says the issue of remembering and dealing with the past is divisive in modern Germany.

“You have certain towns and communities who are completely open and very interested in doing great work,” she says. “You have others who don’t at all, and are on the verge of – not denying – but saying: ‘Ah, we don’t need this’.”

Recently, this issue has grabbed headlines when members of right-wing groups, such as the AfD, have made comments about the past, saying that Germany should not have to focus so much on history.

However, this is a worrying development for many people.

Furthermore, she says fascism is still a major problem today.

“I don’t think it’s new,” says Schmitz.  “What is new is that there’s an openness that you can just say what you think now.”

But on the other hand, Schmitz says there’s also a “big number of people standing for an open society”.

Perhaps that’s why it’s more important than ever to get younger generations involved in memorials, such as the Stolpersteine and others.

“There are different and many fragments of the puzzle that can create awareness,” says Schmitz.

Stones can be vandalized

A problem the Stolpersteine project must deal with sometimes is vandalism. Last year 16 stones were dug up in Berlin, and there have been other cases of people deliberately damaging the plaques.

“When a vandalism becomes public we usually get so many people donating that we are able to lay even more stones,” she says.

Stolpersteine exist in 900 different cities and towns across Germany, and beyond. Tributes placed at Stolpersteine laid for Jewish victims in Rhineland-Palatinate in May. Photo: DPA

Interestingly, Munich is the only city in Germany where Stolpersteine does not have a presence. That’s because Jewish groups said they did not want people trampling on stones commemorating Nazi victims.

Not everyone wants a Stolperstein plaque laid – and that’s okay. Schmitz says it’s a “personal question” and it doesn’t suit all families.

The person behind the plaque

There is a story behind every Stolperstein and members of the public are welcome to research them. There is an interactive map on the Berlin site that leads to biographies, some with pictures.

But Schmitz does not want to talk about individual stories that have stuck in her mind, because she wants to emphasize that “every life counts”.

“It doesn’t play a role if the person is a huge singer or an actress or a worker, and that’s what I like: the equalness of the victims in the measurement of the inscriptions,” she says.

One of the most positive things to come from the project is the sense of community. The stones become part of the street or the town they’re placed in and locals look after them.

They get on their hands and knees or squat down on the pavement and polish them. If the stones become damaged or vandalized, they let the Stolpersteine offices know.

“In Berlin, citizens really do take this responsibility on,” says Schmitz.

Even after anniversaries, such as the Kristallnacht pogrom on November 9th, pass locals will check up on their streets’ Stolpersteine regularly, while popping out for milk or on the way to meet a friend.

These stumbling stones are tiny fragments of a puzzle of someone's life, and they help to remind people of the atrocities that humankind is capable of.

Stolpersteine belong to everyday life. Schmitz says: “It's just there on the street, and it’s a tiny little sign.”