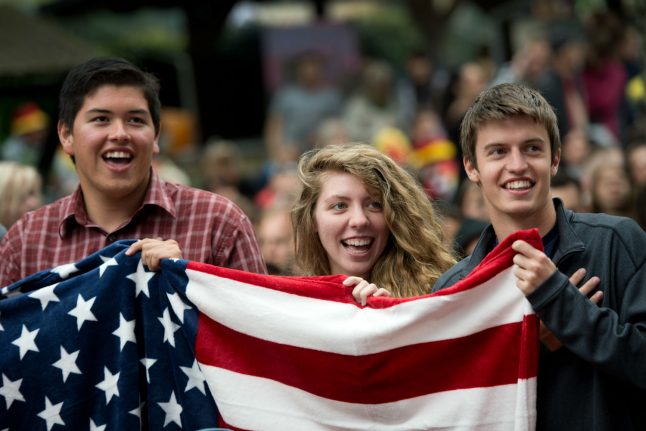 Americans during a World Cup public viewing in Dresden in 2014, the same year as the last primaries.

Tuesday evening marked one of the most contentious U.S. elections in history – which could explain why seven times more Americans abroad requested ballots than the last midterm elections in 2014.

Americans living outside of the U.S. can register in the state they last lived, and cast their vote via an absentee ballot or through a U.S. Embassy or consulate. The websites for the U.S. Vote Foundation and Overseas Vote have had a 2,500 percent spike in traffic.

In a close and controversial race, Democrats took control of the House, while Republicans took control of the Senate. German media declared the other successes they saw in the elections: “A triumph for women,” wrote Spiegel Online, referencing the record number of at least 99 women who will sit in the House of Representatives.

Spiegel added that it was “a good day for America,” that Trump now has to share the power in Washington with the Democrats.

We spoke to two Americans in Germany on Wednesday from both sides of the political spectrum about why they cast their votes and what their hopes are before the 2020 presidential elections.

A Democrat abroad: ‘Holding our breath in anticipation’

Eliza Levinson, an American in Berlin and member of Democrats Abroad, was already organizing a voter registration drive in September in the hope that more unregistered Americans would be ready to cast their votes come November. By Wednesday morning, she felt she could let out a sigh of relief.

“I was incredibly relieved to see the results of this year's midterms,” said Levinson. “Of course, we didn't have the ‘blue wave’ some optimists in the American media were predicting, but I think the 2016 election returns taught a lot of us to have more realistic expectations for the extreme mobilizing powers of all sides of the political spectrum in the US.”

Levinson, who cast her ballot from abroad for the first time after a year of living in Germany, was upbeat about the results from individual U.S states, and state senators who were elected.

“They should do some good work to reinstate political opposition to some of Trump's more frightening political maneuvers of late, and I'm very, very relieved that the ballot measure in Massachusetts preserving rights for transgender citizens has been upheld.

Around the world people have been “holding our breath in anticipation of the midterm results,” she added, “and I'm very much hoping liberal politicians in the US will act in a way to correct the course of a so-far abominable administration.”

We asked Americans in Germany to weigh in on The Local Germany's Facebook page about what they thought of the election results.

A Republican abroad: ‘It would be great if we could stop the name calling’

Richard Wilhelm, communications director of the Overseas Republicans and an American in Frankfurt am Main, also echoed that it can be a difficult to mobilize the eight million Americans abroad to vote. “Many expatriates do not realize that they can still vote from overseas.”

Yet “once you have requested absentee ballots the process becomes routine,” said Wilhelm, who has called Germany home for several years. “The biggest challenge is to remember to do it in time at every election,” he said.

For Wilhelm, the midterms didn’t hold any big surprises, he said. “Many expected the Democrats to take the House and they did,” he said, pointing out that at least Republicans retained control of the Senate.

He felt that Democrats hurt themselves with “less than professional actions” during the Brett Kavanaugh hearings – referring to a now-Supreme court judge who Democrats tried to stop from gaining the position after he was accused of sexual assault.

Yet like Levinson, Wilhelm also had a bipartisan note of optimism. “My hopes going forward is that our representatives on both sides of the aisle can find some common ground to work together for the good of the American people,” said Wilhelm. “Recently not only Washington, but the rest of the nation has divided into two opposing camps.”

“It would be great to see if we could stop the name calling, he says, “listen to the other side and engage in meaningful debate to address the many challenges that face the USA.”

POLITICS
What Britons in Europe need to know about the UK government’s ‘votes for life’ pledge
Url copied to clipboard!