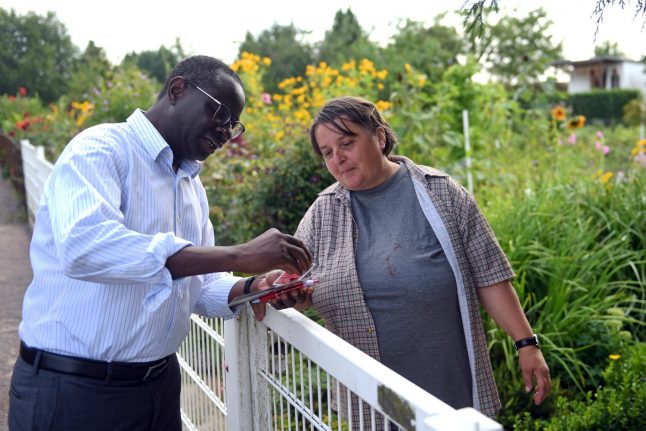 Diaby talks with a constituent in nearby Landsberg. Photo: DPA

Dr. Karamba Diaby’s office is on the corner of a winding, narrow street in Halle’s old town. One window is covered with a 6 foot tall image of the SPD politician.

Through the other window you can see the red chairs set out for visitors beside a flip board with “Herzlich willkommen” in marker pen. On the wall hangs a kitsch metal sign: given recent electoral losses, it’s message “Here the SPD is voted for” reads more like a hopeful incantation than a fact.

Diaby’s agreed to let me accompany him on a few appointments in his constituency. He’s warm and – aside from the occasional glance out the window to wave at passersby – attentive.

Profiles of Diaby often note how long it takes him to get down the street in Halle: he has a habit of stopping for chats with locals. Much is also made of his long standing passion for the allotment scene.

Today I discover he is also interested in the etymology of first names – one of the first questions he asks is where ‘Holly’ comes from. “The history and roots of them fascinate me,” he explains. The first meeting is with the two student founders of the Halle chapter of Studenten Bilden Schüler. The project gets student volunteers to support kids from low income backgrounds with their school work. They have come to the right office.

The students pitch the project,  after explaining their names, of course. Diaby is impressed: he offers them some financial support.

Above all else, Diaby would like to be known as a politician pushing for equality in education. “Your education shouldn’t be affected by your background and whether your parents have money or not,” says Diaby, who came from the West African country of Senegal to the GDR in the mid 80s on a university scholarship to study chemistry.

Education, he explains, is currently one of the biggest challenges in Halle, which is situated about 40 kilometres from Leipzig.

Historically known as Halle by the Saale (Halle an der Saale), the river it lies alongside, it’s mixed Celtic and Germanic linguistic roots reveal the city’s ancient relationship with salt harvesting.

During the GDR the city, officially Halle/Saale at the time, was known as the centre of the chemical industry. Diaby believes Halle, the birthplace of the Baroque composer Handel and home to a number prestigious research institutes, is today a city defined by cultural diversity.

Martin Luther University, just a dozen meters from Diaby’s office, is the heart of this identity. “The university has a 500 year old tradition,” he says. “It’s where the first African student to study in Europe was enrolled as well as the first German woman to receive a doctorate.”

After arriving in Germany, Diaby studied German in nearby Leipzig with students from 17 other countries. Halle University, where he went on to study chemistry, represents for him a continuous thread of internationalism in the city. “Today 40% of students come from outside the east of Germany.”

This is an image of the city he would like to see gain more recognition. When I first saw Diaby at a reading of his autobiography in Berlin – which traces his life from childhood in Senegal, to chemist, to SPD politician – he criticized media coverage of the east: journalists on fleeting visits, too quick to generalize and too unwilling to deconstruct prejudices. A poster for Diaby which reads: “Ingrained in Halle. Present in the election district.” Photo: Holly Young

The book’s opening chapter details his first major encounter with the media, as national and international journalists descended on Halle to cover his 2013 election to the Bundestag.

Spiegel’s coverage was a particular shock for Diaby: the report on “the election of first black African into the Bundestag” in a “stronghold for right wing extremists” ran under the headline “Das Experiment”. Diaby hoped his book would both satisfy the endless interest in his personal story and help to challenge stereotypes of the east, to which it has been tethered.

In the early afternoon we head from Diaby’s office to his next appointment. The tram snakes down picturesque streets in the old town, past high street chains and trendy cafes.

'Very little has changed in terms of media coverage'

It cuts across the expansive central market square, as the Gothic cathedral that contains Martin Luther’s death mask whizzes past. The first time visitor to Halle, writes Diaby in his book, would ask himself where this grey city with foreboding empty streets, that the Spiegel promised them, had hidden.

Diaby saw his book as a plea to society for tolerance and acceptance, and he’s keen to point out where this exists in Halle. In the corridors of the hospital, as he makes his way to meet someone organizing an art exhibition, he smiles and points to a poster on the wall. A nun smiles beneath beneath the lines “We’ve always worn a scarf on our heads. Here everyone is treated the same.”

“Very little has changed in terms of media coverage of the east over the decades,” says Diaby.

”Whenever there is far right activity, whether it was riots in the 90s, or Chemnitz this summer, the whole of the east is placed under suspicion”.

Some things, of course, have changed. In September Diaby posted a picture of himself at a rally in Köthen with the caption: “We need to make clear everywhere is we don’t want division, we want an open society: that’s why we are here today.”

Köthen, which lies 30 km north of Halle, experienced right wing protests two weeks after Chemnitz this summer following the death of a German man after an alleged fight with three Afghan men.

In arguing against “Ost (east) bashing’, he doesn’t want to sanitize what is happening. “Racism and growing populism are no phenomena of the east: we’re seeing the growth of it all over the world –  in other European countries, in America,” says Diaby. Diaby visiting the Islamic Cultural Centre in Halle/Sall along with SPD politician Aydan Özoguz and Abdassamad El Yazidi, the general secretary of the Central Council of Muslims in Germany in February. Photo: DPA

“On the other hand you can’t say what happens here isn’t so bad. We can not deny that right wing radicalism and racism in its violent form is statistically more common in the east – that is the reality.”

In his autobiography, Diaby describes incidents of racism he faced over the decades in Halle. But he’s felt a shift in recent years. The long walks home from the train station at 2am he made during his first year in Halle, he wouldn’t repeat now: “Back then there wasn’t anxiety like there is today.” Saxony-Anhalt and other east German states has seen an increase in right-wing attacks.

Accounting for the AfD success he described how they have mopped up a nebulous disillusionment, with roots both global and local, and given it shape and target.

“One of the reasons [for rise of populism] is that we find ourselves in a globalized world, and there are many grounds for insecurity,” says Diaby.

“Right wing movements like the AfD use this fear and they create the idea there is an ‘us’ and ‘them’…They provide easy answers, like if we didn’t have any refugees then things would be going better. If the government hadn’t invested money in refugees then everything would be better with our pensions and with long term unemployment.

“These are over simplified answers.”

The recent results in Bavaria and Hesse have demonstrated that the SPD’s electoral decline isn’t limited to the east. “The SPD is naturally in a very, very difficult position at the moment,” says Diaby. “The coalition isn’t working.”

Improvements to employment and pensions that have been suggestions from the SPD aren’t always recognized: “We need to show that we are doing politics for everyone,” he says. “That it isn’t true we are only spending money on refugees.”

Education and employment are key priorities in Halle. He wants to encourage more companies to the east, and provide more support to help get the long-term unemployed back into work. There are he says too many children in Halle that grow up in vulnerable situations, in families dependent on the social support of Hartz IV.

“Some children have never seen their parents go to work and one of the saddest things,” says Diaby, “is when you ask some children what they want to be when they are older and they say a “Hartzer receiver”.

For our last appointment, we head to a building at the back of the hospital. There we meet a smiling nun, with a very firm handshake, in a lime green room.

We take a seat at a long table set with teacups and trays of mini pastries. Diaby is here to speak to the nun and others involved in the “Elisabeth-Tisch” project. For the last 25 years, people can come to this room any day of the week to receive a hot meal and have a chat. It’s financed by donations and open to everyone.

Over hot meals they hear the stories of those that come through their doors, how many have become caught in a social and economic downward spiral. Sometimes, they say, it takes just a tiny bit of support to break out of this. I leave Diaby chatting, and head to catch the bus to Berlin, another journalist dropping into town for a few hours. Opposite the station there is a tangle of flyovers, railway lines and roads linking Halle to the rest of Germany. Away from the gothic buildings of the centre, the outskirts of Halle could be the outskirts of anywhere.

It’s difficult to find the line of where the old meets the new, the global meets the local, in Halle.

However one of the fault line for these tectonic shifts in global politics, can be found in a house in Halle a few hundred meters away from the university.

This house has become the headquarters of the far-right group Identitären Bewegung (Identitarian Movement), so it’s become a friction point for residents and local activist groups such as Halle Gegen Rechts (Halle against the Right) challenging the growth of the far-right.

“I think it is good, that our civil society in Halle is alert,” says Diaby. “If we want an open and cohesive society, we need people to go out into the streets and say it.

“We can’t just sit in our warm living rooms and shake our heads at our screens…The majority of society is still open and tolerant. Germany is too beautiful to abandon to people that only want to hate and divide.”