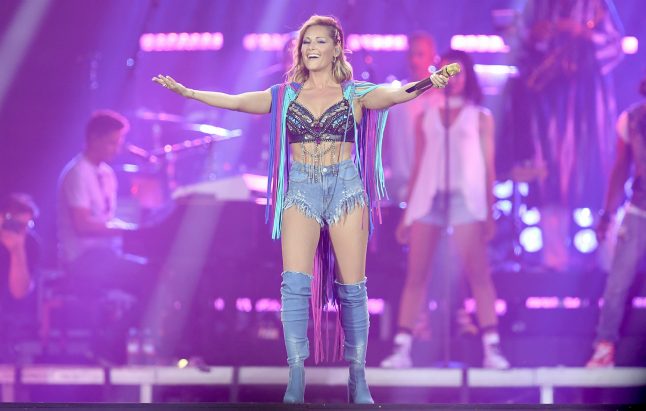 If someone asked you what kind of music is popular in Germany today, you’d be forgiven for thinking first of Berlin – the so-called “capital of cool” – and the techno music that pounds all weekend long throughout the city’s world-renowned clubs.

You wouldn’t be wrong, of course. But what if we told you that the most-downloaded German album of all time features cringe-inducing lyrics such as “Du bist der Captain meiner Seele/ Hast mein Schiff Voll im Griff”, (“you are the captain of my soul, you have my ship fully under control”) and remained in the German charts for four years after its release?

What if we told you that this album, Farbenspiel, was released in 2013 and only left the charts last year?

Farbenspiel, by Helene Fischer, is just one album amongst thousands that belong to the bizarrely enduring cultural phenomenon that is 'Schlager' music. If you’ve never heard it, you’re in for a treat. Or a shock, depending on your sensibilities.

Since the genre is so varied, it’s hard to define exactly, but could broadly be described as cheesy German pop music/“Schlager”, which roughly translates to “hit”, often featuring repetitive sentimental lyrics which rhyme so often that it sounds, in one writer’s words, as though “your Golden Retriever learned German and then wrote a song”.

Still, Schlager music, which steers away from politics and deals in joyful melodies and key-changes, is thought of by many as an escape or “a rock in hard times,”  18-year-old Thorge Schramm, who lives in Lower Saxony and runs the Schlager.de Facebook page, told The Local.

Jürgen Renner, 40, who lives in Munich echoes this sentiment, saying that “during their free time, [people] want to be happy”.

He believes that Schlager remains popular with young people because it’s changed with the times, and is today “very popular because it's something between German pop music and disco sound […] younger people like Schlager with disco beats”.

The marmite of music

Yet many people have a love-hate with the relationship, having dubbed it the Schlager “marmite of music” ,and  “the most embarrassing thing Germany has ever produced” and dismissed as music for grannies.

Yet there are over 45 active fan clubs nationwide, each dedicated to a different Schlager artist and hosting regular meetups and events. The question is, who’s right? And if Schlager really is as bad as its detractors say, then how on earth has it kept German audiences captive for so many decades?

The birth of any genre is impossible to pin down exactly, but some have speculated that “Schlager” first entered the vernacular in 1867, when a newspaper in Vienna called the opening number of Johann Strauss’s “Beautiful Blue Danube” a “‘Schlager”.

Yet Schlager’s golden age actually came decades later, during the post-war period, when the tendencies of the genre to place value on conservative values like family, heterosexual love and the homeland made it popular with Germans seeking to reject the encroaching anglophone influence of rock n’ roll and all the liberal politics that came with it.

That’s not to say that Schlager is, or was, a niche sub-genre, but. quite the opposite. The vast popularity of this kitch, saccharine music is almost unbelievable to foreigners like myself. The Youtube channel “ICH FIND SCHLAGER TOLL,” for instance, Has over 500,000 subscribers.

Public broadcaster ARD still beams regular schlager programming to homes around Germany, and, if you so wished, you could still attend a Schlager concert several times a month in cities around the country.

Of course, just as young, liberal Germans in the 1960s and 70s rejected Schlager as music for conservative older people, many today still push the line that Schlager’s continued popularity can be attributed to the older generation, with young people often bemoaning their parents’ and grandparents’ poor taste.

And yet one artist flying in the face of these assumptions is Helene Fischer, the artist responsible for Farbenspiel, who has sold over 10 million records since her debut in 2005.

Far from being an ageing has-been, she’s only 34 years old, and draws in crowds both young and old to packed-out stadiums. Schlager, for better or for worse, has undergone an undeniable revival over the past few years, with sales advancing 16 per cent in 2014 to €556 million.

The reasons behind this revival have been disputed; some have claimed Schlager’s joyful feel and distinctly German identity began to appeal to Germans over the past decade of Merkel’s leadership – which included two World Cup wins.

Schlager expert Ingo Grabowsky speculated in Deutsche Welle that younger people in the ‘90s once wanted to “use music to distance themselves from their parents”, but “the generation of people who are now parents feel closer to young people than their parents did in the 1970s and '80s”, thus making Schlager acceptable listening once again.

Of course, we outsiders can scoff at Schlager all we like, but the English-speaking world is no innocent party. Just listen to the melodic similarities between ABBA’s “Fernando” and Andrea Berg’s “Die Gefühle haben Schweigepflicht”.

Granted, you’d still be hard-pushed to call ABBA’s music cool, but with the astronomical success of the recent Mamma Mia! sequel, even the most cynical of critics and music fans have found themselves infected by the joy of their greatest hits.

Part of the film’s success is undoubtedly owed to the turbulent political moment in which it was released; Mamma Mia! and ABBA’s delightfully cheesy music offers people a way to escape the relentless misery of the news cycle. One critic in Vogue actually dubbed it “pure, perfect escapist fun”.

Of course, there’s no telling whether Schlager would have taken hold in different parts of the world were the lyrics are more widely written in English, but if the current ABBA fever is anything to go by, sneering seems rather hypocritical.

Then again, try listening to this track just once without thanking your lucky stars that the German enthusiasm for this absurd, catchy and often ridiculous genre looks, for now, set to stay put.